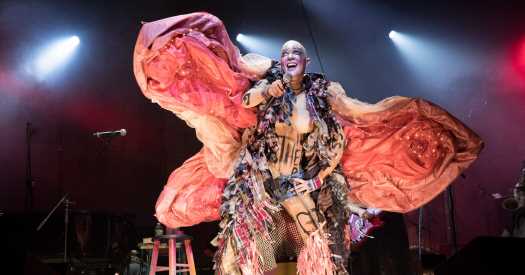 What kind of art the coronavirus pandemic will inspire remains an open question. But the playwright and performer Taylor Mac has spent much of the past year of theatrical shutdown creating a work about the last Big One.

“Joy and Pandemic,” set during the influenza pandemic of 1918, will have its premiere in September at the Magic Theater in San Francisco. And if all goes according to plan, it will be with an in-person audience.

“The pandemic has taught me to be skeptical of certainty,” Sonia Fernandez, the Magic’s interim artistic director, said in an email confirming the production. “That said, we are optimistic that we will be able to ensure a safe environment to produce the play with the artistic rigor it deserves.”

Mac is best known for “A 24-Decade History of Popular Music,” a marathon 24-hour performance piece that took in all of American history through song, refracted through a radical queer lens (and involving some exuberant audience participation). “Joy and Pandemic,” inspired in part by some of Mac’s research for that show, had actually been commissioned by the Magic, a 144-seat nonprofit theater with which he has a long association, before the current pandemic hit.

“At first, I thought about dropping the flu aspect,” Mac said in a phone interview last week. “It seemed maybe too on the nose. But then I thought it will be nice to ritualize this experience by making a play that’s not necessarily about this flu, but is about this moment in time.”

“Joy and Pandemic” is set in Philadelphia in September 1918, at the tail end of World War I, on the day of the huge Liberty Loan Parade that became an infamous super-spreader event, though it also bounces forward in time to 1951. It takes place in a children’s art school (inspired by one Mac’s mother ran), and it deals in part with Christian Science, in which Mac was raised.

“It’s so much about what our beliefs are, what somebody else’s reality is, and how those two things match up,” Mac (who will not appear in the play) said.

Mac’s work, even more than most live theater, is based on the opposite of social distancing. His last play, “The Fre,” which was in previews at the Flea in New York when the coronavirus hit, featured audience seating inside a giant ball pit, where the actors metaphorically mud-wrestled.

During the past year of shutdown, he has been developing “Joy and Pandemic” with the director Loretta Greco, via Zoom. Mac (who at the start of the pandemic also created an artist-led mutual aid effort called The Trickle Up) said he missed the normal in-person process of “hanging out with everybody and talking about ideas and surprising each other,” and then inviting the audience in.

“Being in a room together with other people, that’s the whole point,” Mac said. “I’m in it for the hang.”

And “The Hang,” as it happens, is also the title of another upcoming Mac world premiere, scheduled for January 2022, at the Here Arts Center in New York City. Mac, who will perform in the show, would describe it only as “a musical theater piece,” but not a musical per se, created in collaboration with the composer musical director Matt Ray, the costume designer Machine Dazzle, the director Niegel Smith and others from the “24-Decade” team.

03/21/2021 Entertainment Comments Off on Next from Taylor Mac: A Post-Pandemic Pandemic Play — Set in 1918
Recent Posts