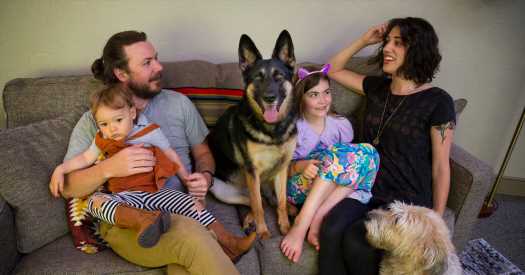 For Sara Shepherd, the low point of her family’s pandemic-inspired decision to move into a 19-foot Winnebago was when the carbon monoxide detector went off in the middle of the night at a campground in Long Beach, Wash.

Ms. Shepherd, 33, was living in that tight space with her husband, their 7-year-old, their baby and two dogs. The alarm sounded, the baby was inconsolable, and then one of the dogs puked.

“This is hell,” Ms. Shepherd thought at the time. Though at least her van did not have a carbon monoxide leak: It turned out the detector went off in the Winnebago because one of the dogs had farted too close to it.

Before moving into the van, Ms. Shepherd said, she and her husband were both feeling the “suburban suffocation” of their life in Oregon City, Ore. The “#vanlife” idea started as a joke, and then gained its own strange momentum.

With their older daughter in school online, and her husband working remotely as a software developer, when would they be able to do something like this again? By August 2020, Ms. Shepherd had quit her full-time job as a technical writer and turned to freelancing; they moved out of their house, got rid of most of their possessions and took to the open road. 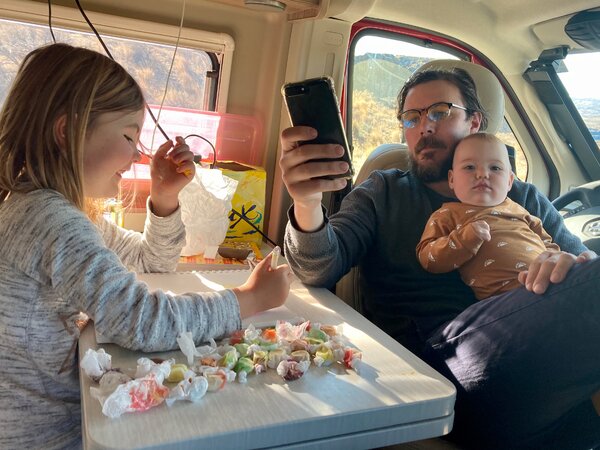 Though Ms. Shepherd’s changes were quite dramatic, she is not alone in mining inspiration from the pandemic to make big shifts. The Covid era has created a financial and mental health crisis for many, however the harsh light of the shutdown allowed some mothers to reassess their lives — to leave jobs that made them unhappy, to make moves across the country and across the world, to move on from relationships that were not working. Here are some of their stories.

Markita Staples-Green, 39, was already “constantly stressed and exhausted” when the pandemic hit, but the crisis made her overwhelm “unbearable.” Ms. Staples-Green was living in Oakland, Calif., with her husband and two daughters, who are now 4 and 2, and had a full-time job as a program manager. Before the pandemic, she had started writing and illustrating children’s books because she felt there was a gap in the market for picture books featuring kids of color.

Though the family had been considering a move to the Atlanta area before the pandemic, the shutdown accelerated the timeline of their move, and inspired Ms. Staples-Green to leave her day job and make writing and illustrating children’s books her full-time occupation.

While Ms. Staples-Green is happy to have much more space in their new home in Sandy Springs, Ga., and loves writing and illustrating, the past year has not been without strife and trauma. Her mother-in-law died in February 2020; and the pandemic has the couple reassessing their plan to grow their family, because they aren’t sure they have the emotional bandwidth for more kids. Maintaining mental health has been a priority for her family.

“Pandemic life is still a little scary. Mom life is still very exhausting,” she said. Still, “Through all of this, I’m confident we will survive it all.”

Lisa Van Riper, 56, had breast cancer nine years ago. “Once you have survived that life and death struggle, you look at things differently,” she said. She pays more attention to self-care than she did before she got sick, so when she started a new job near her home in Northern Virginia in February 2020, Ms. Van Riper knew it wasn’t going to work out after five unhappy months.

“I left that job to keep my mental and physical health as intact as possible during pandemic times so I could be present for my wife and daughter,” she said. Two weeks after she gave notice, her father died. The whole family got Covid in December, and their beloved dog died a few months after. Everyone was sad and scared, she said.

In the months after she gave notice, she sent out about 200 resumes, did 50 interviews, and ultimately found a new job as the executive director of communication at Knox College in Galesburg, Ill. Then, she moved her family to nearby Peoria in March 2021.

She said the biggest lesson her 15-year-old daughter has learned through the loss of her grandfather, her dog and her sophomore year of high school is that “it’s OK to not be OK.” They got a little Pomeranian named Teddy, who is helping to lift everyone’s spirits, and Ms. Van Riper’s daughter just made the varsity cheer team at her new school.

‘I don’t want to define myself as simply a mother.’

Malee Statwick runs a travel planning business, which cratered when the pandemic started. Ms. Statwick, 33, was living in Denver with her husband and two kids, who are 2 and 6, when they decided to pick up stakes and move to Pattaya, Thailand. There were no local cases of Covid when they moved there last summer. That has subsequently changed, and her children have been remote schooling since April, with very strict local quarantining requirements; even the beaches closed for a while.

Ms. Statwick grew up partially in Thailand, and her parents live there, but she said that it hasn’t been easy to settle in. “I speak Thai, but not as well as a native Thai speaker; it’s been hard to make friends here. It takes time for any expat, but then things closed down, so we haven’t been able to meet up with people,” she said. She’s also struggling to figure out who she is without her work, which has been slow to pick up again, and without her Colorado friends or hobbies.

“I don’t want to define myself as simply a mother, but when my kids are home with me 24/7, how can I possibly figure out what else I might want to do?” she said. “It is a work in progress, but I am learning how to cope — from getting therapy, to asking for help, to not feeling guilty for leaving for a weekend.”

‘It created some interesting dynamics.’

Katharine Swanson’s divorce was finalized a couple weeks before the pandemic shut everything down in Boise, Idaho, where she lives with her three boys, who are 8, 6, and 3. Ms. Swanson, 31, had left her full-time job at a software company to become a consultant right before the pandemic hit, too, which turned out to be a blessing in disguise when schools closed, because it gave her more flexibility. Still, she and her ex-husband were struggling to keep their heads above water, and he was one of the few people she could safely see for a while.

“It created some interesting dynamics for sure,” she said. “We were very freshly divorced saying, ‘Do you want to come over and play cribbage?’”

They decided in the summer of 2020 to try to move, as a family, to Portugal, because before the divorce they both had wanted to live abroad with the kids. The pandemic allowed the remote work situation they had always dreamed of. But by the time their visas finally came through this spring, her husband had started dating someone locally, and now their future is in limbo. She is still trying to decide if she wants to take the kids abroad on her own.

Ms. Swanson said she grew up pretty conservative and religious, and started her family young. She was only 30 when she got divorced and is still trying to figure out her new life while a pandemic continues. “It’s been so strange,” she said.

‘Some people got puppies, and some people moved into vans.’

In the end, Sara Shepherd’s #vanlife experience was short-lived. After three months of remote learning, interrupted Zoom calls and attempting to sleep train the baby in the van, their heater broke and the closest R.V. shop that could fix it was in Eugene, Ore. The repair would take three weeks, so the family decided to sell the van and stay there permanently.

“I would call it a failed experiment,” Ms. Shepherd said. “Some people got puppies, and some people moved into vans.” While she is glad to be back in a house, with her now 8-year-old in school two days a week, she does miss some of the closeness they had in the Winnebago. “It felt like a nest,” she said. “We miss being together all the time.”