This conversation includes spoilers for the first four episodes of “My Brilliant Friend.”

Episode 3 of “My Brilliant Friend” opens with two new actresses playing Lenù (Margherita Mazzucco) and Lila (Gaia Girace), who are now teenagers. The girls’ lives are also diverging in new ways: Lenù is heading to a classical high school in Naples; Lila is working with her brother in her father’s shoe repair store. But that doesn’t mean they are any less competitive, and puberty brings new ways for Lenù to measure herself against her old friend. Meanwhile, tensions mount as a new generation of men vie for power in the neighborhood along battle lines drawn by their parents.

Once a week, over the four weeks the series airs on HBO, we are gathering a rotating group of Elena Ferrante fans from across The New York Times newsroom to discuss the show. You can read our discussion of the first two episodes here.

This week, Nicole Herrington and Alicia DeSantis, editors on the Culture desk, and Gal Beckerman, an editor on the Books desk, jump into Episodes 3 and 4.

GAL BECKERMAN As the third episode opens, we get a time jump that moves Lenù and Lila into their teenage years of burgeoning sexual awareness and acne trouble. I was impressed with how seamless the transition was between the child and teenage actresses who play the girls, and especially the opening, which smartly and swiftly uses a dream sequence to move it all forward. But there were other ways that the show, in its design choices, signaled the other big transition, a shift in perspective from the parent’s world to the children’s. Same streets, but not so drab and gray. There were pops of color. A bit more life and possibility in a passing pastel pink dress. Part of this was the move from the 1940s into the postwar boom of the 1950s, but it also gave the visceral sense of youth emerging into their own, claiming the neighborhood.

The violence too changed. The first two episodes were so full of a kind of status quo of brutality. The parents fighting. The Carracis and Solaras. And it was violence that felt more shocking than in the books — the sound of bodies slamming, the screaming. In these next two episodes, it was the threat the boys posed to the girls that came through emotionally and directly, through gestures and stares. Their physical presences — imposing, leering, pushing them toward sexuality — were more menacing on film, especially as embodied by those world-class bullies, the Solara brothers. How did you both feel about this change of tone, a shift from the fairy tale quality of the first two episodes to the messiness of oncoming adulthood? 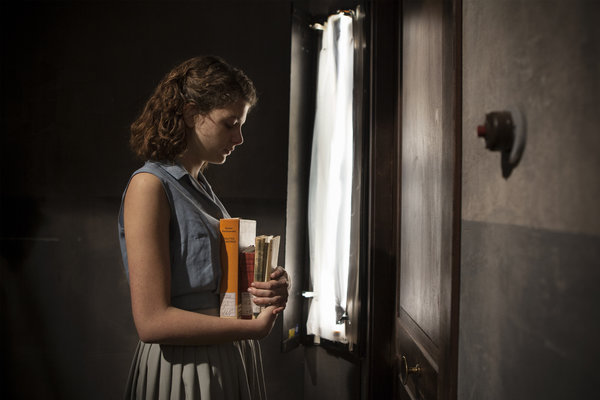 NICOLE HERRINGTON There’s certainly a sense of innocence coming to an end. The physical violence — and threat of it — has been more intense onscreen than I seem to recall from reading the books. As adolescents, Lenù and Lila now face the additional threat of sexual violence, and that tension builds over the course of Episodes 3 and 4. We see the Solara brothers (Marcello and Michele) forcibly shoving Ada into their new Fiat and taking her for a “spin.” She’s 14 in the book and the incident left her “a little angry, but also laughing.” But in the TV series she returns disheveled, lipstick smeared and visibly traumatized.

The reactions couldn’t be more stark: Carmela and Gigliola are envious while Lila is appalled by the abduction. When the Solaras later attack Lenù, Lila threatens Marcello with a utility knife. It’s interesting to see Lenù internalizing Lila’s bold moves and sense of agency. So much so that when she is cornered again — this time by two boys in a school bathroom — Lenù makes a quick calculation. She channels Lila with a power move that seems to surprise the boys, and picks up 10 lire in the process.

ALICIA DESANTIS I found the scene with Ada in the Solaras’s 1100 vivid in a way I hadn’t appreciated in the book (that smear of her lipstick when she returns, and the violence implied by it). In the novel the event is mentioned often, but I never quite felt it. Watching it unfold here, it made sudden sense that it would make a mark — that it would linger and spread, that it would take on a permanence in the community.

For me, it also better explained Lila’s knife. In the book, Lila’s actions, filtered entirely through Lenù’s narration, can at times seem merely stubborn or spiteful. Watching this scene helped me understand the knife — a reaction to a total system and an act of more significant rebellion.

BECKERMAN Also, when we see that scene with Ada rendered onscreen, we experience just how public it all is. We see many eyes watching and many people shocked and it all gives weight to the notion that societal norms are being violated in that moment. Even in a faithful adaptation like this, there are clear differences in what each medium can do best — and this is a telling instance. The novel is obviously great on interiority, giving us the twists and turns of Lenù’s psyche, but the panorama of film allows us to see a whole community. It gets at the systemic much more efficiently, through a brief montage or a tracking shot through the streets. (David Simon, in completely different contexts, uses this to full effect.) We literally see their place in this enclosed, self-policed community, which is a nice counterbalance to the sound of their own voices and thinking.

HERRINGTON Yes, I was thinking the same. Lenù, as the book’s narrator, provides us with a rich personal narrative but only a mere outline of this world. The cinematic version beautifully fills in the blanks. We see the town starting to roar to life postwar — cars and mopeds are replacing horse-drawn carts — but you also feel the restless energy of the lower-class youth starting to rebel against tradition and societal norms, dancing to rock ’n’ roll (Little Richard’s “Good Golly, Miss Molly,” which only briefly breaks the tension of a house party) and questioning the unchecked power of the Camorra-affiliated Solaras. Despite what initially felt like a stifling, monotone place, this is a vast world created by Ferrante. And as we’re introduced to more inhabitants like Pasquale, a communist construction worker who fancies Lila, the broader issues of class, gender disparity and politics also seep into view. To me, this makes the series more of a sweeping tale of postwar life in this small corner of Italy.

DESANTIS It’s said that novels (especially four-part-sagas) are good tools for world-building, but one of the surprises here for me is the way in which this dramatization brings that aspect of the book to life. This is partly a function of the narration, I think. In the book we are of course utterly bound to Lenù’s perspective — she is our only guide. Here we’re a little freer to make up our own minds about Lila, Pasquale, Marcello and the rest. It’s also easier to see the lines between them — as independent agents, engaged in economic, political and social struggles.

We are so very very close to Lenù in the novels — it’s interesting to be put into a different kind of relation to her. In general I don’t miss this about the book. (For me Pasquale was a kind of revelation. He was never a particularly vivid character in the novel.) Lenù is so much at the center of the books — what did you think of her characterization here?

BECKERMAN That’s a great point about Pasquale. He was also much fuzzier for me in the book than he is here. I don’t know if it’s the actor (and his hair!) that’s making the difference or, as you said, that we can see him as a character on his own, and not simply as a remembered presence in Lenù’s life. As for the characterization of Lenù, it’s also refreshing to see her free of retrospective narration. In fact part of the annoyance I’ve heard some people express about the voice-over probably has to do with the tension of listening to a woman in her 60s unfold the story of her life at the same time that we are watching that life — and it’s most important relationship — shifting and changing in real time, outcome unknown.

When I block out that voice-over, Lenù’s insecurity and sense of inferiority comes through much more clearly — I had forgotten, for one thing, about the pimples. The actress does a brilliant job of capturing that adolescent awkwardness and anxiety about trying to figure out her place in the world. The lack of self-assurance about her physicality (in contrast to Lila’s self-possession) is made visible because we actually see the girls. Ferrante only does physical description in broad strokes. Here that critical aspect of their dynamic becomes flesh and blood.

HERRINGTON: And seeing Lila’s reactions helps tremendously. So much about Lila and her motivations are a mystery in the books. But as played by Gaia Girace — it took me a few scenes to warm up to her — we see a generally fearless young woman who’s brimming with a desire to learn, problem-solve and create. And this fuels the competitive dynamic between Lenù and Lila. The look on Lenù’s face when she learns Lila has been studying Latin is a stinger. And it’s even better when Lila reveals she’s been learning Greek, ahead of Lenù. It’s a mic drop that literally stops Lenù in her tracks.

DESANTIS One of the reasons the books are so beloved, I think, is there is a lot of narrative space in them. There is in fact very little visual description of the characters in the books: The Solara brothers are “handsome.” Lila is “dark” and narrows her eyes a lot. At times Lenù is “beautiful” at times she is “ugly.” We know she is fairer and rounder than Lila, but not much else.

All this blankness allows the reader an opportunity to fill in the gaps — to recast the characters, the situations, the feelings in terms of her own enmities, jealousies, loves. When I was reading the series with friends it was not unusual for us to ask: Are you Lila or are you Lenù? (Of course, one could be both.) It’s particularly interesting, therefore, to see these two women physically embodied onscreen.

11/27/2018 Entertainment Comments Off on ‘My Brilliant Friend’: A Fairy Tale of Youth Gives Way to Messy Adolescence
Recent Posts