When I spoke to Dr. Stephanie Whitener, 41, an anesthesia critical care physician and mother of two, the parent-teacher organization at her son’s elementary school was planning an in-person happy hour for teachers. “I spent yesterday trying to rally all the parents I knew in health care to stop it, because of the risk to them, and also to in-person learning,” said Dr. Whitener, who lives in Charleston, S.C.

Though they did end up canceling the happy hour, “it feels like I live in two different realities,” she said, one where people take the virus seriously, and another where they don’t. That dichotomy can make the emotional and psychological toll of treating Covid-19 patients even harder to bear.

As this strange and difficult year draws to a close, I wanted to highlight the experiences of parents who are medical workers — and thank them for their service. Like so many other essential workers, they have put their physical and mental well-being on the line in 2020 to do their jobs. These frontline workers are at greater risk for burnout and PTSD than the general population. Some have been separated from their children for weeks at a time, communicating only on Zoom.

Like all parents, they’re worried about their own kids, socially, academically and emotionally — while also fretting about the children who are falling behind in school because of the barriers to remote learning, and who may be grieving over family members lost to the virus. And even after more than 300,000 deaths in the United States alone, some health care workers are still trying to convince their communities that the virus is a real threat.

“Some of the first deaths I experienced were people only 5 to 10 years older than me, not 70-year-olds,” said Brianna Tremblay, a 36-year-old I.C.U. nurse practitioner in northern New Jersey. She is also the mom of a 3-year-old and pregnant with a baby due in January. Her distress was especially overwhelming in March and April, when the first surge of the virus was hitting the New York City region. “I came home from work every single night and cried with my husband,” Tremblay said.

“When a patient would crash, we would spend hours in the room trying to save them, and then have to call the family,” to give them the bad news, Tremblay said. Her I.C.U. had a mortality rate of 80 to 90 percent in March and April for Covid-19 patients. “It truly was a war zone.” 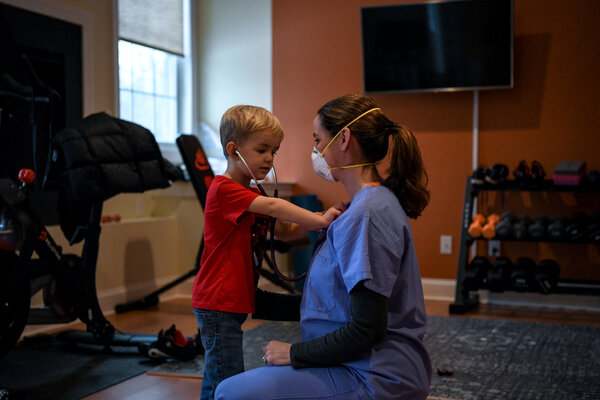 Several of the workers I spoke with caught the virus themselves. Cecilia Duran, a 38-year-old midwife in New York City, fell ill in March, when she was 10 weeks pregnant. In addition to fairly intense symptoms — “worse than the flu,” she said — she was also dealing with the nausea and fatigue of early pregnancy. “I was quarantining with my toddler, who was also sick, and my husband was trying to figure out his working from home situation in a small New York apartment,” she said. “It was complete insanity.”

Dr. Mary Thomas, a pediatrician in New Jersey, said that she’s much more worried about many of her young patients than she is about her own three children (her whole family already had the virus and recovered). “I’m seeing so much anxiety and depression, and a lot of it has to do with this terrible year,” Dr. Thomas said. “Parents are unemployed or losing money or stressed on top of it, and kids are on screens for hours a day.”

But it’s not all bleak. Many parents who are medical workers described the outpouring of help they received from their community. In the middle of the pandemic, when Brianna Tremblay’s babysitter’s father got Covid-19, she could not come to work. Neither Tremblay nor her husband, who also works in health care, could take time off, so a couple of neighborhood moms stepped in and watched her child.

“They really came together and supported me, and brought me food and put signs on my lawn,” Tremblay said. “I saw both the worst things in the world, and the absolutely most incredible outpouring of support in my entire life.”

Tremblay, who is now 34 weeks pregnant, said she is scheduled to get her first dose of the coronavirus vaccine this week. Dr. Whitener got her first dose last week, but that does not mean their service is ending any time soon, nor the dissonance they experience in communities where people don’t respect the full impact of the virus. Carla Blue, 43, a critical care nurse and mom of two school-age boys in Cincinnati, said that when people don’t wear masks or socially distance, “That makes it feel like all the work you’re doing is in vain.”

She leaves work physically and emotionally drained, and then she sees people talking close together, and not wearing masks. “It makes me want to pull them aside and show them a picture of what we do,” she said. “People are more selfish than I ever imagined.”

12/23/2020 Entertainment Comments Off on Moms on the Frontlines
Recent Posts
We and our partners use cookies on this site to improve our service, perform analytics, personalize advertising, measure advertising performance, and remember website preferences.Ok