Sandy Kominsky is hardly a man in the prime of his life. Once a sought-after acting coach to the stars, he now makes his living teaching Hollywood wannabes how to audition for sitcoms and shampoo commercials. He has three failed marriages, a grown daughter who barely abides him and a body that is rebelling against him.

So when Michael Douglas was asked to play this bedraggled protagonist of the new Netflix sitcom “The Kominsky Method,” he said there was only one way to receive the assignment.

This is not how audiences have come to think of Douglas. In his best-known films, thrillers like “Fatal Attraction” and “Basic Instinct,” his polished but aggressive characters came to define a certain American machismo of the 1980s and ’90s. No matter how many shabby has-beens he goes on to play, he will forever be associated with his ruthless portrayal of Gordon Gekko, the unapologetic capitalist of Oliver Stone’s “Wall Street.”

If he was once ubiquitous, idolized and highly bankable, Douglas is at peace with the knowledge that such glories don’t last forever. He hasn’t suffered the steep decent of Sandy Kominsky, but recent chapters of his life have been turbulent. He has overcome a cancer diagnosis to give some of the warmest and most eccentric performances of his career. He has also been accused of sexual misconduct by a former employee.

After all this time, it’s not clear how Douglas perceives himself or that he even has a fixed self-image; in his own mind, he is neither a pampered show-business scion nor a self-assured master of the universe.

Long-term plans aren’t his style. “I never lined up what the hell I was going to do,” Douglas said.

So why not, at an unmoored moment in his work and an uncertain one for the entertainment industry, take his first ongoing television role since the 1970s and play a ragged septuagenarian with a full spleen and an enlarged prostate? 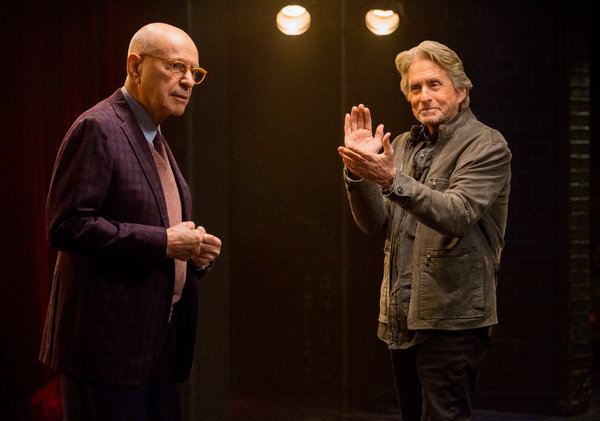 As Douglas explained, “I understand that guy whose life just didn’t turn out the way he anticipated.”

Nothing would immediately seem amiss in the life of Douglas, who was speaking on an October afternoon from the sumptuous Central Park West apartment he has kept for 30 years. He sat in a darkened corner of a living room, where sunlight from a nearby window illuminated only his silver hair and the grin on his face.

Personal trophies, like his Academy Awards for “Wall Street” and “One Flew Over the Cuckoo’s Nest” (which he helped to produce), gleamed on bookcase shelves. The walls were decorated with memorabilia celebrating his prominent parents: vintage posters for movies like “The Big Sky,” that starred his father, Kirk Douglas, and a 1943 edition of Life magazine featuring his mother, Diana Douglas, the actress and Bermudian aristocrat, on its cover.

Despite what would seem like an obvious head start, Michael Douglas said his own career came together fitfully, over a period of decades. He counted off milestones: his years being mentored by Karl Malden on the TV crime drama “The Streets of San Francisco”; his efforts to get “One Flew Over the Cuckoo’s Nest” made as a film after his father had optioned the Ken Kesey novel and nearly abandoned it; winning his Oscar for “Wall Street” in 1988.

That last achievement, Douglas said, was when he finally saw himself “stepping out of the shadow of my dad.”

“It gave me a confidence I didn’t have before,” he said. More softly, he added, “I set a high bar for myself.”

Longtime friends say that Douglas has always possessed a certain freewheeling spirit. Danny DeVito, who would later work with him on “Cuckoo’s Nest” and appear with him in films like “Romancing the Stone” and “The War of the Roses,” recalled meeting him at the National Playwrights Conference in Waterford, Conn., in the 1960s.

When both men volunteered for the same beer run, DeVito said: “We looked at each other, and I said, ‘Do you get high?’ And he said, ‘Yep.’ We were fast friends from then on.”

Douglas could be audacious — “I never swam naked in a pool until I met Michael,” DeVito said — but was also centered and sympathetic.

DeVito pointed out that Douglas’s upbringing as a child of divorce is often overlooked: Kirk and Diana Douglas ended their marriage when Michael was 5, and his stepfather, Bill Darrid, whom Diana married in 1956, was an important influence.

“I’m sure Kirk is a cool guy to have as a dad,” DeVito said, “but a lot of the values that Michael traveled with in his kit were from his mom and his stepdad. His sensitivity and regard for other people came from the way he was brought up.”

Today, Douglas is the father of three children: his son Cameron, by his previous marriage to Diandra Luker; and his daughter, Carys, and son Dylan, by his marriage to Catherine Zeta-Jones.

He is also a survivor of Stage IV cancer, diagnosed in 2010 — a “large, almond-size tumor at the base of my tongue,” as Douglas described it.

“We made a strategic decision to say that it was throat cancer,” he said, “because the connotations of having your tongue removed and not being able to speak was not a pretty picture.”

Douglas was fearful that his health scare would forever tarnish him in the industry’s eyes — “that’s if I survived, if I could talk,” he said. But he made a comeback playing Liberace in Steven Soderbergh’s 2013 HBO movie “Behind the Candelabra.”

The performance won Douglas an Emmy Award, but he was not entirely enthralled with opportunities — mostly low-budget independent films — that followed.

Then came “The Kominsky Method.” Chuck Lorre, the creator of the series, is better known for shows like “The Big Bang Theory” and “Mom,” which are hits but have hardly strayed from the time-honored formulas of the multicamera network sitcom.

On “The Kominsky Method,” Lorre said he wanted a show — single camera, no laugh track — that would let him address topics about confronting aging and mortality that are usually shunned on such programs.

“I just turned 66, and I’m wired to see that there’s comedy there,” Lorre said. “Inside the aging body is this witness that thinks it’s 18. There’s the cognitive dissonance of, what’s happening to me? When I’m not crying, it’s funny.”

About a year ago, Lorre began to sketch out the relationship among the show’s principal characters: a powerful entertainment agent (played by Alan Arkin) whose wife dies of cancer in the first episode, forcing Kominsky to realize that his own time on earth, however degrading, is also limited.

Lorre said he could not help but think of Douglas for this role. “There’s a sublime elegance to the way he presents himself in the world,” Lorre said. “Between his talents and his experience, he would know how to play the moments — both the poignant moments and comedic moments — with great finesse and nuance.”

Arkin, who had never met Douglas before, initially wasn’t sure what to make of him. But over the course of filming the show’s eight-episode first season, he discovered a person who was very different from his movie roles.

“He has a very determined air in film,” Arkin said. “There’s something very committed about his demeanor — ‘This is the way I am, this is the way it’s going to be.’”

On the series, Arkin said, Douglas was “flexible and present, and I ended up having a lot of fun with him.” He added, “There’s something endearing about him in this series that I don’t think I’ve seen before — a vulnerability that’s very appealing.”

Others who feel they have observed a gap between Douglas’s on and offscreen personas do not share this assessment. In January, Susan Braudy, a journalist and film executive who ran the New York office of Douglas’s production company in the late 1980s, accused him of sexual misconduct. Braudy told The Hollywood Reporter that Douglas repeatedly used vulgar and sexually profane language around her, and once masturbated in her presence.

Before the accusations were made public, Douglas gave a pre-emptive interview to Deadline, a competing trade publication, to deny them. He told me in our interview that Braudy’s claims were “a complete lie” that had “shocked and hurt” him and his family.

Braudy responded in an email, “Michael Douglas is a good actor and a super-cunning operator.” She added: “He believed his power was so much greater than mine that he could pull icky/unwelcome sexual pranks without consequence and even take pleasure in my extreme discomfort.”

Douglas said he believed his decision to “get out in front of the story” had “turned out to be the best thing,” and he has proceeded in his work without any apparent disruption.

He received a star on the Hollywood Walk of Fame earlier this month, not far from the one his father, Kirk, was given in 1960. He’s also one of many actors who have gotten boosts from the Marvel film franchise: He plays Dr. Hank Pym, the valiant, endearingly past-his-prime mentor to Paul Rudd’s title hero in the “Ant-Man” movies.

While Douglas waits to find out if there will be further seasons of “The Kominsky Method,” he is also finding new ways to connect with his illustrious 101-year-old father.

Recounting what he said was a typical conversation between them, Douglas played the roles of both himself and father: “I’ll say, ‘Dad, did you ever think you’d have a son who’s celebrating his 50th year in show business.’ Long pause.”

As Kirk, he answered himself: “What did you say?”

Then returning to his own voice, he proudly replied, “You heard me.”