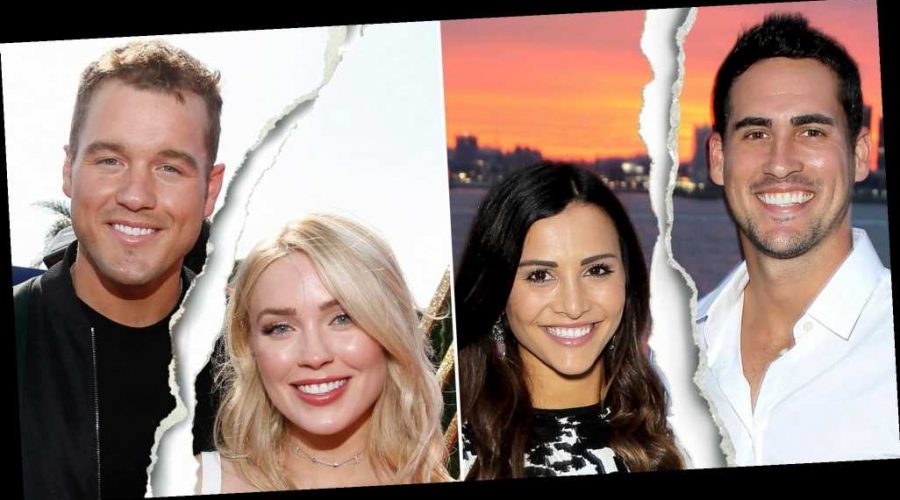 Not all Bachelor breakups are created equally.

While some Bachelor Nation couples quietly part ways after the final rose — and a handful of others actually make it down the aisle — other Bachelor, Bachelorette and Bachelor in Paradise duos make headlines for weeks following their decision to call it quits.

Season 23 Bachelor Colton Underwood and winner Cassie Randolph, for example, vowed to stay friends when they went public with their split in May 2020. It didn’t take long, however, for things to turn messy between them. After the former football played shaded Cassie’s decision to do an interview with Chris Harrison during the summer of 2020, she revealed his plans to write a new chapter of his memoir, The First Time, about their breakup.

Colton later claimed in August 2020 that the exes buried the hatchet — and Cassie agreed to help him with the chapter.

“I wrote the chapter and she saw it and was OK with it and we made changes. I say we. I know it’s my book but like, there was more than just the breakup that was going to go into the book, the extra chapter,” he said on Reality Steve’s podcast at the time. “The chapter is part our breakup and part me having COVID. We go into the details that we’re comfortable sharing in that chapter and we both went over it together. … Honestly, I think her being a part of it made it even better.”

Less than a month later, Cassie was granted a temporary restraining order against Colton. In the court documents obtained by Us Weekly, Cassie wrote that she felt “fearful for her safety,” accusing her ex of repeatedly calling her, harassing her via “unsettling text messages,” placing “a tracking device on her vehicle” and showing up uninvited to her home.

After the details of the restraining order were made public, a rep for Colton told Us, “As this is a legal matter, we cannot provide any comment at this time.”

Colton and Cassie aren’t the first Bachelor Nation couple to get authorities involved in their breakup. Back in 2007, season 6 Bachelor Byron Velvick’s final pick, Mary Delgado, was arrested following an alteration between the twosome. They split two years after the incident.

Scroll through for a breakdown of the messiest breakups in Bachelor Nation: