Wearing a black, one-shoulder Givenchy dress (and dark nail polish – said to be a Royal Family no-no) Meghan announced the label’s artistic director Clare Waight Keller as the womenswear designer of the year.

With the baby due in the spring, Meghan is thought to be about five months pregnant, her bump noticeably visible as she walked out on stage at the Royal Albert Hall. 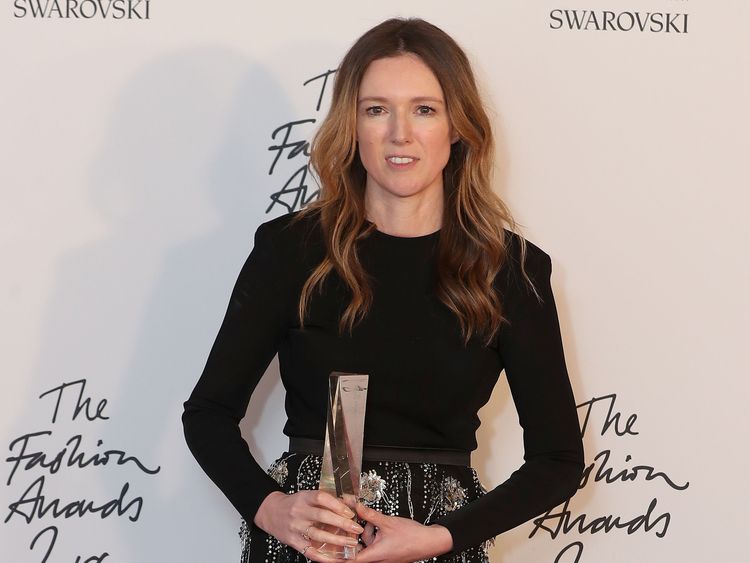 Announcing the award, Meghan said: “I feel especially proud to announce tonight’s winner, who yes is a British designer leading on the global stage with vision and creativity, but also with incredible kindness.

“Which is why when I met her for the first time 11 months ago I knew we would be working very closely together.”

Waight Keller made history in 2017 when she became the first female artistic director at French fashion house Givenchy, founded in 1952,

The Birmingham-born designer described it as an “enormous honour” and a privilege when she was chosen to work on Meghan’s dress for the royal wedding in May.

The designer said it was the “ultimate surprise” to receive her award from Meghan. In her acceptance speech, Waight Keller praised Meghan and thanked her for trusting her with the design.

“This woman is so amazing,” she said.

“I got to know Meghan on such a personal level and to have someone like that trust you in an incredible moment in their life is something that is just the most unbelievable honour. I can’t thank you enough.”

Meghan and Prince Harry announced their baby news in October, less than five months after their wedding.

The new baby will be seventh in line to the throne, behind Prince Charles, Prince William, Prince George, Princess Charlotte, Prince Louis and Prince Harry.

Related posts:
12/11/2018 Entertainment Comments Off on Meghan cradles bump on stage at British Fashion Awards
Recent Posts
We and our partners use cookies on this site to improve our service, perform analytics, personalize advertising, measure advertising performance, and remember website preferences.Ok