Lifetime’s first holiday movie to center on a same-sex romance has found its leading men.

On Monday, the network announced that actors Blake Lee and Ben Lewis had signed to star in “The Christmas Setup.” Directed by Pat Mills, the film follows Hugo (played by Lewis), a New York corporate lawyer who plans to spend the holidays in Milwaukee with his mother, Kate (Fran Drescher), and best friend Madelyn (Ellen Wong).

Kate then arranges for her son to run into a high school crush, Patrick (Lee), who has recently returned to Wisconsin after a successful stint in California’s Silicon Valley. As they enjoy the festive season together, Hugo and Patrick’s attraction to each other is undeniable. But as Hugo receives word of a big promotion requiring a move to London, he must decide what is most important to him.

In a case of art imitating life, Lee and Lewis are a real-life couple who married in 2016.

“The Christmas Setup” will be featured among a spate of 30 new holiday-themed films in Lifetime’s “It’s a Wonderful Lifetime” lineup, set to kick off in October. It isn’t the network’s only diverse seasonal offering, either, as “A Sugar & Spice Holiday” will star Jacky Lai and Tony Giroux and focus on a Chinese American family. 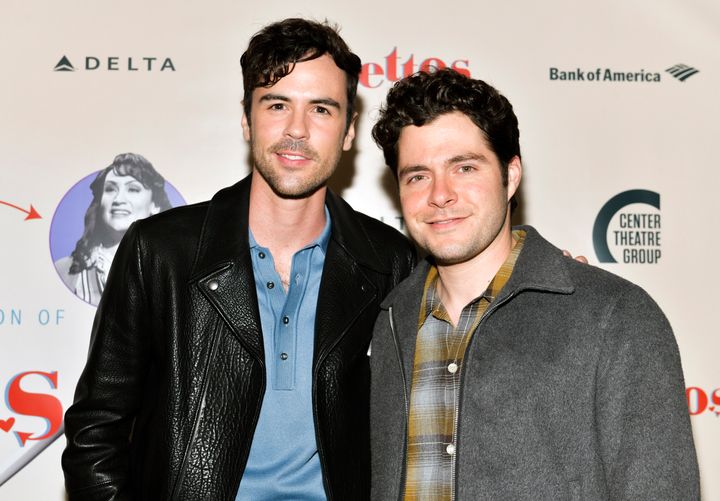 Amy Winter, Lifetime’s head of programming, praised “The Christmas Setup” and “A Sugar & Spice Holiday” as “important additions” to the network’s lineup.

“The world we create on camera should reflect the world we live in,” she said. in a Monday statement. Noting that Lifetime was working with GLAAD to ensure that “The Christmas Setup” represents a sensitive and accurate portrayal of an LGBTQ relationship, she added, “Our hope with these inclusive films and others is that people will see themselves while enjoying universally relatable holiday romances.”

The stars themselves expressed similar sentiments on social media.

“There’s good-weird and bad-weird,” Lee, whose credits include a recurring stint on “Parks and Recreation,” wrote on Instagram Monday. “2020 has been bad-weird, but starring alongside my husband … in Lifetime’s first gay Christmas movie definitely qualifies as good-weird. In fact, it’s the most surreal, wonderful early Xmas gift I could ask for.”

Known for his roles in “Scott Pilgrim vs. the World” and the CW’s “Arrow,” Lewis simply pledged to “make the yuletide GAY!”

Both Lifetime and the Hallmark Channel have pledged to diversity their lineup of holiday movies, which have been criticized for relying on heterosexual (and overwhelmingly white) stories.

The tide appeared to shift somewhat last year when Lifetime included a gay couple (Brian Sills and Mark Ghanimé) as supporting characters in “Twinkle All the Way.”

Though it was a small gesture, the movie’s inclusion of an LGBTQ narrative won praise from the Daily Beast’s Tim Teeman, who suggested it could “shake up these snowy, typically heterosexual worlds of love.” Other critics, however, urged screenwriters and producers to take the next step by placing a same-sex couple at the center of a holiday film.

The Hallmark Channel is set to unveil an queer-themed Christmas movie of its own. Though no specifics have been confirmed, the network pledged to include “LGBTQ storylines, characters and actors” when announcing its holiday movie lineup in July.