Mary Ellen Moylan was 11 and attending a ballet school in her hometown, St. Petersburg, Fla., when her mother saw a magazine article about George Balanchine’s newly formed School of American Ballet.

“I’m going to send you there,” she told her daughter. “You look good in Florida, but let’s see how you look in New York.”

Ms. Moylan looked pretty good in New York. Molded by the Balanchine school, which was founded in 1934, her dancing became “precise, clearly articulated, but delicate and highly expressive,” the ballerina Maria Tallchief (and Balanchine’s second wife) wrote in a reminiscence in The Chicago Tribune in 1997.

Still in her teens, Ms. Moylan began to perform principal roles with the Ballet Russe de Monte Carlo, where Balanchine, ever more enthusiastic about her work, was the resident choreographer.

In 1946, working with his own newly founded company, Ballet Society, he created a role for her, that of Sanguinic in “The Four Temperaments.” As a Balanchine protégé, Ms. Moylan had arrived. Or as Ms. Tallchief said in an interview for the television documentary “Dancing for Mr. B: Six Balanchine Ballerinas,” Ms. Moylan had become “the first great Balanchine dancer.”

And yet her death, almost a year ago, went largely unnoticed in the dance world. Even a collection devoted to her in the archives of the University of Oklahoma School of Dance makes no mention of her death; neither do various biographical sketches of her online. Word of her death, however, began to trickle out through social media, and her daughter-in-law, Carol Bailes, recently confirmed it: Ms. Moyland died on April 28, 2020, in Redmond, Wash. She was 95.

Ms. Moylan’s career began and largely took shape before Balanchine formed Ballet Society and, in 1948, the New York City Ballet. But her career was closely associated with his work.

Her New York stage debut was with Nicholas Magallanes in a one-off Balanchine work, “Pas de Trois for Piano and Two Dancers,” created for a Russian War Relief performance in 1942. He subsequently cast her, also in New York that year, in a leading role in the operetta “Rosalinda,” which he choreographed. (Her partner in the production was José Limón, who had begun to make a name for himself as a choreographer.)

While Ms. Moylan was appearing in “Rosalinda,” Balanchine cast her in the virtuosic ballerina role in “Ballet Imperial,” with music by Tchaikovsky, in its New York debut. She would perform in that ballet, at the Broadway Theater at 53rd Street, and then take a taxi to the 44th Street Theater to appear in the second act of the operetta.

“She is definitely a talented dancer who is worth watching,” John Martin of The New York Times wrote in a review of “Ballet Imperial.” 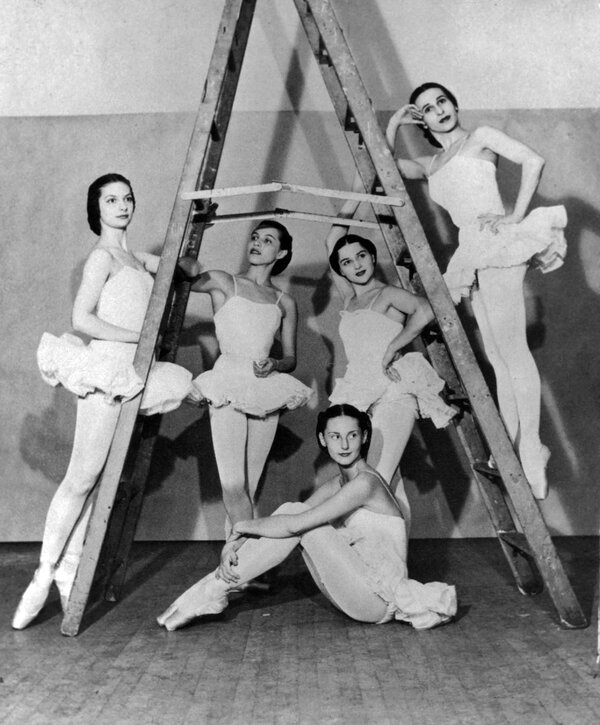 Ms. Moylan wrote in Francis Mason’s 1991 anthology “I Remember Balanchine,” “When a person so young and inexperienced is onstage in a situation like that, I don’t think they know enough to be as terrified as they should be.”

Along with many of her School of American Ballet classmates, Ms. Moylan joined Sergei Denham’s Ballet Russe de Monte Carlo in 1943 after seeking out Balanchine’s advice. He told her not to sign a two-year contract. “The next year I was able to double my salary,” she wrote.

With the Ballet Russe, she performed leading roles in Bronislava Nijinska’s “Etude” and Fokine’s “Les Sylphides” as well as in “Swan Lake,” “The Nutcracker” and “Paquita.” She also appeared in numerous Balanchine pieces, including “Concerto Barocco,” “Le Bourgeois Gentilhomme” and “Danses Concertantes,” created for the company in 1944.

Around the same time, the Ballet Russe was engaged to appear in the operetta “Song of Norway” for the Los Angeles Civic Light Opera, with Balanchine as choreographer.

“While we were performing ‘Norway’ at night we rehearsed ‘Concertantes’ during the day,” Ms. Moylan wrote. She added, “For the opportunity to work with Balanchine, we would have danced all night, and all day, too.”

In a review of the Ballet Russe’s New York season in 1945, the critic Edwin Denby observed that under Balanchine’s influence, the younger soloists “seemed to be bursting into bloom like forsythia all over the stage.”

“My favorite has been Mary Ellen Moylan,” he added, “whose graceful intrepidity and air of candor make me think of those demure ballet heroines who a century ago leaped from the top of a twenty-foot scenic waterfall into the arms of a partner.”

Ms. Moylan left the Ballet Russe in 1946 to work again on Broadway, this time with the choreographer Antony Tudor in the Alan Jay Lerner and Frederick Lowe musical “The Day Before Spring.”

Balanchine and Lincoln Kirstein started Ballet Society toward the end of that year, and after Ms. Moylan joined the troupe, Balanchine began to work with her on the role of Sanguinic in “The Four Temperaments.”

Interviewed for the film “Dancing for Mr. B,” Ms. Moylan recalled being immediately struck by the piece. “At the time it’s being conceived, there is a feeling you get — you know that something great is in progress,” she said.

The piece, with music by Paul Hindemith, was part of the company’s opening night program on Nov. 20, 1946, at the Central High School of Needle Trades in Manhattan. “A large long piece packed close with intricate but powerful dance invention,” as Denby described it, concluding that of all Ballet Society’s excellent dancers, “Mary Ellen Moylan is its bold young ballerina.”

Mary Ellen Moylan was born on Aug. 24, 1925, in Cincinnati to John and Vera (Stahl) Moylan. Her mother was a schoolteacher, her father a builder. In search of work during the Depression, the family moved to St. Petersburg when Mary Ellen was 6. Her mother, an avid theatergoer and daughter of an actor, enrolled her in a local ballet school.

After attending two summer sessions at the School of American Ballet in New York, Ms. Moylan became a full-time student there at 14, living with an aunt in Manhattan. The next year she was awarded a full scholarship — a lifesaver, she wrote in “I Remember Balanchine,” after her father’s death in an accident in 1938 had left the family in a precarious financial situation.

Through her work with the Ballet Russe, where Balanchine was an important choreographic presence, and in the operettas he choreographed, Ms. Moylan established herself as an exemplar of the Balanchine ballerina. She remained with Ballet Society through 1947, creating a principal role that year in a new Balanchine work, “Divertimento.”

But keen to return to Broadway, she was also studying singing and acting. Soon she joined the cast of the comic opera “The Chocolate Soldier,” which was choreographed by Balanchine and ran for 69 performances at the New Century Theater, with Ms. Moylan and Frank Moncion as the lead dancers.

Not long afterward, Balanchine and the set designer Oliver Smith, the co-director of American Ballet Theater, asked her to lunch. Balanchine wanted to choreograph a principal role for her in a new ballet, “Theme and Variations,” and Smith asked her to join the company.

“I thought for a moment and said no,” Ms. Moylan recalled in “I Remember Balanchine.” “I had an opportunity to go back to Ballet Russe and dance all the big old roles, and I preferred that. Balanchine was astonished, I think.”

But even at the Ballet Russe, she remained a signature Balanchine dancer.

“Her brilliance of style, her wonderful technical facility, and her great personal distinction are admirably exhibited here,” Mr. Martin of The Times wrote in a review of a 1949 production of “Ballet Imperial,” “and Balanchine’s choreographic tribute to the great days of the Russian Imperial Ballet could scarcely have found a more eloquent instrument.”

In 1955 she joined the Metropolitan Opera Ballet, where she created roles in Zachary Solov’s “Soirée” and in a number of opera ballets. She returned to operetta in 1957, appearing as the premiere danseuse in a new staging of “The Merry Widow,” with choreography again by Balanchine.

Later that year Ms. Moylan married a longtime suitor, Robert Stanley Bailes, and retired from the stage. They moved to Costa Mesa, Calif., where they bought a hamburger stand. Ms. Moylan had a son and worked with her husband in the shop.

After her husband died in 1962, she married twice more. After the annulment of her third marriage, in 1968, she moved to Pleasant Valley, N.Y., in Dutchess County, and went to work for Bennett College in nearby Millbrook, teaching ballet classes and becoming its purchasing agent and campus shop manager.

After retiring from Bennett, Ms. Moylan took up watercolor painting and had several exhibitions.

She remained friendly with many of her colleagues from the ballet world, including Ms. Tallchief, and stayed in touch with Balanchine, whom she visited a number of times in the last months of his life. (He died in 1983.)

Ms. Moylan moved to San Jose, Calif., in 1996 to be close to her son, Robert Stanley Bailes, who survives her, and his family; she followed the family again to Washington State in 2007, living in a community for the elderly.

She is also survived by her brother, John Daniel Moylan, and four grandchildren.

Ms. Bailes, her daughter-in-law, said Ms. Moylan would frequently tell the story of the times she went to see Balanchine at the New York City Ballet studios. “He would introduce her,” Ms. Bailes said, “saying: ‘This is Mary Ellen. She was my first ballerina.’”