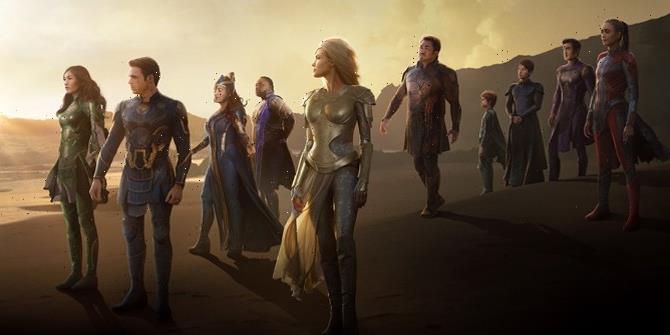 Marvel Studios has revealed a new clip for Eternals, its latest upcoming film set to debut in less than a month.

The 30-second clip features narration from Salma Hayek‘s Ajak beginning with a recap of Avengers: Infinity War and Avengers: Endgame reminding fans of how Thanos erased half of the universe’s population before the Avengers brought everyone back. The following scene includes additional dialogue from Ajak saying: “Humanity once believed we were Gods, with what this planet now faces they will believe again.” The teaser ends with Richard Madden‘s Ikaris shouting “Eternals assemble” and Thena saying “We fight,” referencing past moments from The Avengers films.

Eternals will showcase two timelines, one from the character’s earliest days 7000 years ago, and the other in the present, focusing on the team’s efforts in dealing with the aftermath of Endgame. The recently released final official trailer revealed that the immortal Eternals cast have seven days to stop their evil counterparts, the Deviants from threatening the existence of mankind.

Marvel‘s producer Nate Moore expressed that similar to the films Black Panther and Shang-Chi and the Legend of the Ten Rings, the movie seeks to introduce a never-before-seen part of the MCU. “We want audiences to discover a corner of the Marvel universe they’ve never seen before,” said Moore in an interview. “We want them to discover a mythology that is a challenging sci-fi movie but also has a human heart. And we want them to meet ten heroes who they hopefully can relate to.”

Eternals is slated to debut in theaters on November 5.

In other entertainment news, a huge Attack on Titan gallery is coming to Anime NYC.
Source: Read Full Article