Using modular origami you can turn newspaper into a cube, then create an intricate mathematical puzzle. 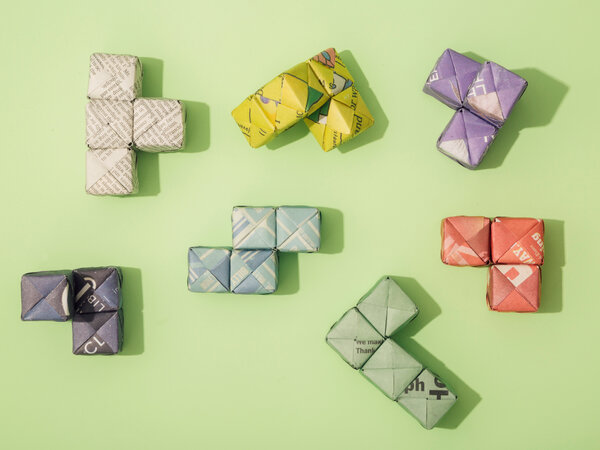 By Lauren Siegel and Josephine Sheng

Sonobe modules follow the rules of traditional modular origami, beginning with a flat square of paper and then combining pieces into structures without tape or glue. The cube that you can make from this simple start is particularly elegant and appealing. It is the same on all six sides and very stable, and it can be combined to make other structures.

Four Sonobe blocks make a bigger cube, but why stop there? They also form the building blocks of what is called a Soma cube, which was invented in the early 1930s by Piet Hein, a Danish mathematician who invented many other games and puzzles. (Hein is said to have come up with the idea during a lecture on quantum mechanics conducted by the physicist Werner Heisenberg, though the timing has been disputed.)

Making a Soma cube requires folding 27 Sonobe cubes, then combining them in groups of either three or four into seven pieces. The pieces are then assembled into a three-by-three-by three cube. There are 240 ways to put the pieces together to form a Soma cube — challenge yourself or a friend to find as many as you can. 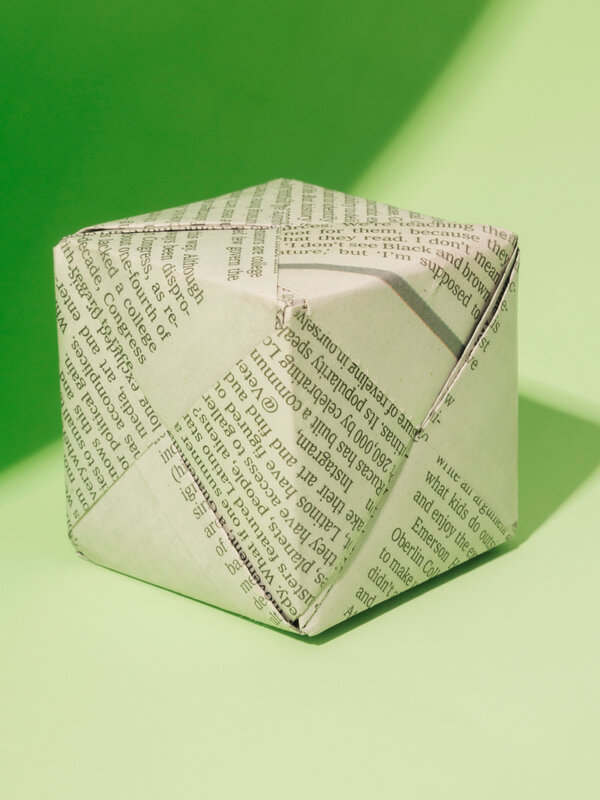 Start with a single page of the newspaper, and if needed trim to 11 by 22 inches. Fold the paper in half, then in half two more times, creating a total of eight 5½-by-5½-inch squares (you need six for each cube) and cut them out..

1. Take your square of paper and fold in half and then unfold. Fold the sides in toward the center crease.

2. Unfold paper. Fold in the top right and bottom left corners to the outer creases.

3. Fold sides to the center crease.

4. Fold the lower right corner to meet the opposite edge.

5. Tuck the flap you just made underneath the left section. Fold the upper left corner to the edge and tuck it under the right section, creating a parallelogram with two pockets.

6. Flip the paper over and fold the corners in to create a square, and then unfold. Make five more so you have a total of six.

8. Turn over, fold up sides and continue adding units, tucking points into pockets until the cube is completed.

Use the cubes to make the seven Soma shapes, taping them together.

Put together the seven Soma shapes to make the Soma cube. There are 240 ways to assemble the pieces so that they create a cube — you need to find only one (or keep going).

09/12/2020 Entertainment Comments Off on Make a Cube, Then Make a Bigger Cube
Recent Posts
We and our partners use cookies on this site to improve our service, perform analytics, personalize advertising, measure advertising performance, and remember website preferences.Ok