On a rainy evening in August of last year, a barely advertised show by the Chicago-based drummer and beatsmith Makaya McCraven jammed an overflow crowd into H0L0, a sparse little basement club in Ridgewood, Queens. His band was a group of New York musicians, some of whom Mr. McCraven had hardly played with before; what they performed was entirely improvised, but with Mr. McCraven subtly steering, listeners had room to get comfortable, to fall into the music. His thick snare drum splattered against the bulb tones of Joel Ross’s vibraphone patterns, making an elliptical groove. Sometimes Brandee Younger’s plucks on the harp led Mr. McCraven into a buoyant, driving beat. Elsewhere, he minimized himself, letting Dezron Douglas’s bass guide the rhythm.

Like many of Mr. McCraven’s shows, the night was recorded, providing raw material for “Universal Beings,” an album he released in October to wide acclaim. Since his second record, “In the Moment,” in 2015, Mr. McCraven has put out a string of albums and mixtapes that amount to a proof of concept. Each one features crudely recorded live improvisations that he has sliced up, pared down and spritzed with effects and extra instrumentals. Part concert bootleg, part hip-hop mixtape, his music — borne of a process rather than a compositional method — has the potential to open up the way musicians think about improvisation.

“Something that I feel is severely missing in jazz is a connection to the aural tradition — it not just being on the page,” Mr. McCraven said in a phone interview this week.

His ability to wrap his albums in the dark allure of a club show, the timeless texture of an old Folkways record and the sonic layering of a hip-hop producer has turned Mr. McCraven, 35, into the most discussed young musician on a Chicago jazz scene teeming with fresh energy. “In the Moment” was just the second release on International Anthem, a jazz-and-more label that has since become a clearinghouse for innovative Chicago music. “Universal Beings” — a double album culled from live performances in four cities, each featuring prominent young local musicians — is the label’s first release to turn a real profit.

Mr. McCraven was raised thinking about music as a binding agent. Born in Paris to Ágnes Zsigmondi, a Hungarian singer and flutist, and Stephen McCraven, an African-American jazz drummer and educator, he was raised in and around Northampton, Mass., an artistically rich area.

Before his mother left Hungary, her best known work had been with Kolinda, a band blending folk traditions from across Eastern Europe in a tacit rejection of political strictures. “They mixed Eastern European music from the larger region — so Romania, Bulgaria, Hungary, Gypsy music, Jewish music — at a time when a lot of borders were being redrawn by war, and a lot of these cultures were talked about as being separated and not having similar roots,” Mr. McCraven said.

As a youngster, he often heard his father playing with the saxophonist Archie Shepp (a National Endowment for the Arts Jazz Master) and Gnawa musicians from northwestern Africa, as well as with Senegalese performers. “That’s a huge influence on me,” Mr. McCraven said, “jazz being part of a folk music.”

By the time he graduated from high school, Mr. McCraven was already touring around the Northeast with Cold Duck Complex, a jam band-cum-hip-hop group that became popular on college campuses. He spent a number of years in and out of the music program at the University of Massachusetts at Amherst, constantly pulled away by opportunities to perform and record. He became the musical director at the Pushkin, a small performance space in nearby Greenfield, Mass., which led to an open-door policy at the venue’s studio. 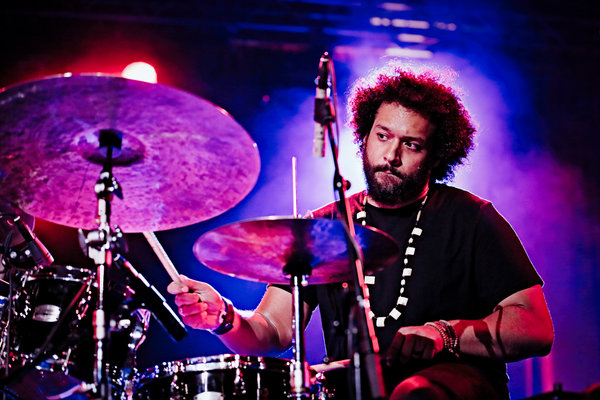 On record, Cold Duck Complex struggled to achieve the sound that reflected the warmth of classic hip-hop samples. “Why is it that when my band tries to learn that hip-hop track, it doesn’t come out the same?” he remembered wondering.

“Later I kind of got into dub reggae, and heard the studio being used as an instrument in that way, which also connected to my love of sample-based hip-hop, and made me ask how that music was being produced,” Mr. McCraven added, name-checking Jamaican producers such as Lee (Scratch) Perry and King Tubby.

He realized that most hip-hop samples come from music that was recorded on analog tape, without sophisticated equipment. When he moved to Chicago in 2006 to join his girlfriend (now wife), Nitasha Tamar Sharma, who had been hired at Northwestern University, he started working with musicians across the worlds of jazz, experimental and African music. He played African-derived music on the creative edge alongside members of the Association for the Advancement of Creative Musicians and in the Occidental Brothers Dance Band International, and felt himself edging closer to a raw, direct sound.

As a result of his wide-ranging work, the music he makes now (recorded with just two room microphones, not the instrument miking that is industry standard) has layers of history built into it. You can hear the spiritual-jazz influences of Idris Muhammad and Lonnie Liston Smith, the clatter of Gnawa percussion, and the ecumenism of hip-hop producers across generations: DJ Premier, Madlib, Knxwledge.

Mr. McCraven began experimenting with the music that would become “In the Moment” five years ago, after seeing the virtuoso guitarist Jeff Parker playing freely improvised sets alongside a D.J. at a Chicago bar. Mr. McNiece was booking shows at the time, and asked Mr. McCraven to start a residency at the Bedford, a restaurant near Noble Square.

Mr. McCraven’s groups — which consistently featured leading Chicagoan improvisers like Mr. Parker, the trumpeter Marquis Hill and the bassist Junius Paul — played experimental, groove-based music in front of small crowds. As a result the music on “In the Moment” feels open and unencumbered; ambient bar conversations often dance across the tracks.

Mr. McNiece remembered being immediately struck by Mr. McCraven’s ability to unite musicians and audiences around a fresh style. “Makaya was the first one who, in a free-jazz context, was bold enough to play something with a backbeat — something that actually made people physically respond a little bit,” he said.

“Highly Rare,” from 2017, was recorded to four-track cassette during a performance at a different bar, just days after President Trump’s election. It has a different vibe, largely thanks to the circumstances: This music shivers and crackles, teetering on an edge. The alto saxophonist Nick Mazzarella’s long tones, sometimes run through a harmonizer, are unnerving, rather than providing balance.

Mr. McCraven hopes to keep introducing his communal, improvisational process to new contexts. He sees “Universal Beings” as the start of a transnational exploration; his sights are set on making similar recordings in Africa soon.

And he’d like to do something similar at home. He thinks the young buskers playing street percussion on buckets around Chicago ought to get to know each other, possibly by improvising together. “They all have similar licks and a similar vocabulary, and I know some of them are in different neighborhoods or different crews and gangs,” he said, adding that he’d like to organize a way for them to be paid to perform together.

“I’m really interested in how the language has gotten passed around. Where do these licks come from? What’s the history? Who are the elders? Where have they learned it? How do the styles and things travel around the city, just like every aural tradition?”

Articles in this series examine jazz musicians who are helping reshape the art form, often beyond the glare of the spotlight.