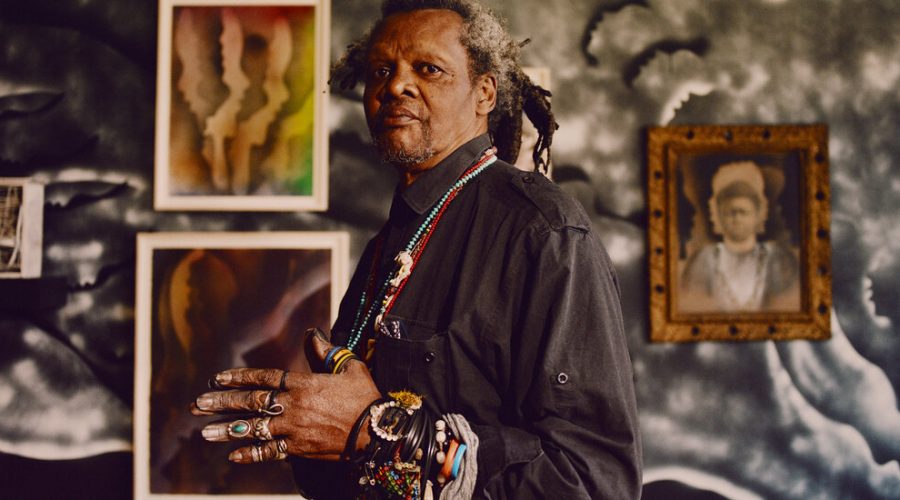 EAST HAMPTON, N.Y. — Lonnie Holley’s life began at an impossible place: 1950, seventh among his mother’s 27 children, in Jim Crow-era Birmingham, Ala., the air thick with violent racism toward him and everyone he loved. Things got even worse as he grew up. At four years old, he said, he was traded for a bottle of whiskey by a nurse who had stolen him away from his mother. Later, as the story goes, he was in coma for several months and pronounced brain-dead after being hit by a car that dragged him along several blocks. Then he spent time in the infamous Alabama Industrial School for Negro Children until his paternal grandmother — he refers to her simply as “Momo” — was able to take him away at the age of 14.

He forged his way out of the miry roads of his origins, becoming a musician and filmmaker, and teaching himself to make visual art. At 71, he has come far, far enough to have just completed a residency as an artist at the Elaine de Kooning House in this celebrity-filled town where he spent two months last winter creating about 100 artworks, many of which have ended up in two Hamptons exhibitions. They are being shown simultaneously: “Tangled Up in de Kooning’s Fence,” at the newly formed nonprofit South Etna Montauk Foundation in Montauk, N.Y. (through Aug. 29), and “Everything That Wasn’t White: Lonnie Holley at the Elaine de Kooning House,” at the Parrish Art Museum in Water Mill, N.Y. (through Sept. 6).

“Gratitude,” he says when he looks back at it all. “I am grateful for the ability to be productive at all.”

But “productive” is a modest way of describing an artist, who, since 1979, has reimagined what is possible with castaway or seemingly useless materials and, particularly, garbage. He follows in the tradition of artists using salvaged materials to depict the life of Black people in the U.S., like the Alabama-born Noah Purifoy (1917-2004), known for his sculptural pieces made from charred wreckage after the Watts Riots of 1965.

Holley’s artistic career was triggered by having to carve out tombstones for his sister’s two children after a tragic fire killed them and she couldn’t afford to buy proper markers. He found piles of discarded sandstone-like byproducts of metal castings from a foundry near her house. “It was like a spiritual awakening,” he said during an interview at the de Kooning House. “I had been thrown away as a child, and here I was building something out of unwanted things in memorial of my little nephew and niece. I discovered art as service.”

His relationship with the sandstone grew, and with his earliest sculptures people began to refer to him as the “Sandman.” Eventually he outgrew this mode of working and began to include other things, especially tiny bits of fabric, metal springs, shoes, boxes, wood and antique objects, some of which he adds to a growing collection worn and carried about on his wrists and around his neck. 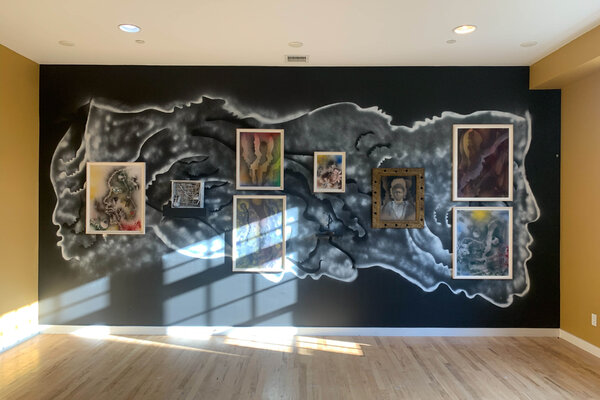 He’s perfected mingling these items into unforgettable assemblages, like “She Wore Our Chains,” a new work created out of a framed, astonishing photograph from the 19th century of an African-American woman that he found in an antique shop in North Carolina and onto which he spray painted faces of women in profile. It is included at the South Etna show, alongside a rotten stump he found during one of his winter morning walks in the woods behind the de Kooning House; the stump became the backbone of some of the striking sculptural works in both shows.

The turning point in Holley’s career came when he met Bill Arnett, a longtime collector and art dealer who had been traveling across the South in 1986. He bought one of Holley’s works during the meeting in Birmingham — a mesmerizing assemblage alluding to the struggles of Black people, made from a mannequin and chains. “Lonnie was so far ahead of the white artists in the world you can’t even believe it,” Arnett, who died last year, told The Washington Post in 2017, describing his first encounter with Holley’s work. “I’ve been all over the world, and I’ve never seen anything like this.”

Arnett promoted Holley alongside other self-taught Black artists from Alabama, like Joe Minter, who created the African Village in America (a continuously evolving art garden he started in the ’80s containing sculptures from scrap materials); Betty Avery, who used broken items like mirrors and glass and tree stumps in her yard as the root for her assemblages; and the great Thornton Dial, who used scavenged materials to create art that told the story of Black struggles in the South.

“He really helped me elevate my work,” Holley said, “and things became a lot more comfortable. Sometimes I wonder how things would have turned out if Bill didn’t show up.” But Holley himself is a collector of sorts and over the years his work has gradually become a conglomeration of Black culture, experiences, and histories.

Holley’s relationship to objects or culture from Black communities is, however, more nuanced. In his new paintings, silhouetted faces are magnificently layered upon quilts, then daubed in dark shiny colors. The faces crash into each other to create optical illusions, paying homage to the Black quilters of Gee’s Bend in Alabama, whose hand-stitching traditions date back to the mid-19th century. He doesn’t relate to the quilts by the women purely as works of modern art (as critics have done, comparing them to works by Matisse and other great modernists); rather, Holley sees them as originating from a history of need, pain, and necessity.

With his transformative touch, he moves them from solid geometric shapes into figurations embodying the experiences that produced them. “Lonnie’s work shares a common innate artistic sensibility and brilliance” with the quilts of Gee’s Bend, said Alicia Longwell, who curated the show at the Parrish. “His drawing and painting on the quilt become a homage to the maker and his own way of recycling and honoring the tradition.”

This is also how he sees the spray paint he uses that recalls graffiti in his luminous paintings: “I want that when all of these — all of my work — are presented, people can say, oh that Lonnie, he took it all, his hands took the spirit, the things they don’t want us to have, and, boom, brought it together.”

He speaks dreamily of the ocean at Montauk where he spent a lot of time by the beach. “That big blue,” he said displaying random bits and pieces of shells, wood, and fabric he’d picked up by the water because he thought he could use them. “Makes me think of being all by myself, like an ancestor that was left behind.”

And although he continues to think of himself like this, as an outsider, his visual art work has been collected by some of the most important institutions in the U.S., including the Metropolitan Museum of Art and the Smithsonian American Art Museum, and has been shown at the White House Rose Garden. “I Snuck Off the Slave Ship,” an 18-minute musical film about the artist’s relationship to freedom in America, which he co-directed with Cyrus Moussavi, was shown at Sundance in 2019.

“Lonnie has held a cult status among the art cognoscenti for a long time as a performer and as a visual artist, but over the past years he has been crossing over, gaining more recognition in so-called quote mainstream corridors of the art world,” said Alison Gingeras, an art historian who curated the show at South Etna.

James Fuentes, the Manhattan gallerist who has shown Holley’s work and placed it in museum collections since 2013, called him a “modern day shaman.” “You cannot ignore the power of his narrative and his connection as a descendant of slavery,” he said, pointing to the recurring motifs of slave ships in his sculptures. He said Holley’s prices have ranged from $5,000 to $50,000 — “thus far.” Now, in a sign of the growing receptiveness by the art world, Blum & Poe, a gallery in New York, Los Angeles and Tokyo, will represent the artist.

“Lonnie had expressed a sincere desire to have a larger platform and more visibility for his work,” said the gallery co-founder Tim Blum. “We clearly realized that Lonnie has been producing, making, exhibiting and contributing to art for four decades and it fits quite beautifully into the gallery’s program.”

After moving to Atlanta in 2010, Holley began to compose and perform music. His voice, in the five albums he has released, is deep and mellow and soothing, making it easy to forget that his songwriting — like his art — is extemporaneous.

“It’s about the brain — same brain that produces the music, produces the visual art. I call it ‘brainsmithing’,” he said, before going onstage at the Parrish to perform a few songs on the night his art exhibition opened.

“His voice stays in your head,” said Gingeras, who was in the small audience.

In his seventh decade, Holley abounds with energy and ambition. He was flying around the world, performing at concerts, before the Covid-19 pandemic put an end to his itinerary. A major show, organized by Blum & Poe is slated for next year in Los Angeles. He is restless, relentless; he just keeps going. It even seems, sometimes, that he forgets how old he actually is. He said during the interview, “I can’t see an old person trying to cross the road and not offer to help.”

Indeed, in the last scene of “I Snuck Off the Slave Ship,” after visuals of Black people from different generations playing, dancing and praying, Holley is shown holding the hand of a much older man and helping him out of church.

Although Holley has had run-ins with the city of Birmingham (its airport authority destroyed his art garden in 1997 while expanding its territory, and he received $165,000 as compensation after a long legal battle), he shies away from overt political conversations. “I don’t want to talk about skin,” he said, when he was asked how he felt being a Black man in the de Kooning house, in an area that could be seen to hold a history much different from his.

Instead, he got up to observe shadows cast by the immense light pouring in from the glass skylights and windows, falling on an assemblage of worn-out shoes and metallic springs. It was midday, and his own shadow joined in the mix when he stood up.

“This is memory,” he said, pointing at canvasses with shimmering silhouettes made from spray paint. “Everything is memory. Every face in these paintings. They’re all the people — especially women — that have supported me. Look at that big beautiful eye. My grandmother Momo. My mother, Mama. Queens.”

And these faces, lives that have held up his life, despite how it all began, preserved in his work on quilts and shining in his canvases, pervade everything, rolling into each other like waves of the sea.

Everything That Wasn’t White: Lonnie Holley at the Elaine de Kooning House

05/06/2021 Entertainment Comments Off on Lonnie Holley’s Life of Perseverance, and Art of Transformation
Recent Posts