Gary Lineker has been criticised by cricket host Jonathan Agnew for expressing his political views on Twitter.

Agnew told Lineker that as “the face of BBC Sport”, he should “observe BBC editorial guidelines”.

“Keep your political views, whatever they are and whatever the subject, to yourself,” he continued.

Lineker responded by saying he could “tweet what he likes” and would continue to do so.

The Match of the Day presenter has often been outspoken on Twitter – regularly writing about Brexit and Prime Minister Theresa May.

Agnew suggested that he would be “sacked” if he followed the Lineker’s example.

But, responding to the criticism on Thursday evening, the former footballer wrote: “I’ll continue to tweet what I like and if folk disagree with me then so be it.” 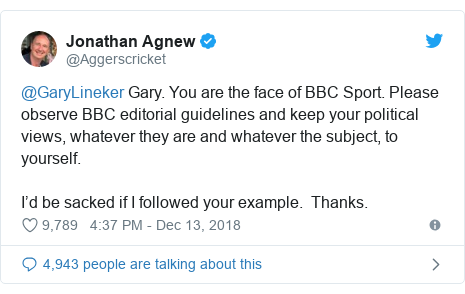 On Wednesday, Lineker posted a thread of tweets as the Conservatives held a no-confidence vote in Theresa May.

He also indirectly criticised Labour leader Jeremy Corbyn, implying the party should be ahead in the polls given the current political uncertainty.

Why does Jonathan Agnew object?

Aggers, as he’s known, suggested BBC presenters should abide by the corporation’s standards on impartiality.

The BBC’s editorial guidelines state: “Impartiality lies at the heart of public service and is the core of the BBC’s commitment to its audiences.”

“However, it is not normally appropriate for them to present or write personal view programmes and content on public policy, on matters of political or industrial controversy, or on ‘controversial subjects’ in any area.”

Lineker falls into a slightly different category both because of his contract and his role as a sport presenter.

A BBC spokesperson said: “Gary is not involved in any news or political output for the BBC.

“As such, any expression of his personal political views does not affect the BBC’s impartiality.”

Lineker only presents sports coverage for the corporation, and is not a journalist or involved in news coverage or commentary.

Previously, the corporation has also defended his right to voice his opinions freely because of his contract.

In 2016, when he was criticised for some tweets about child migrants, the BBC responded by saying: “Gary is a freelance broadcaster and this is a personal Twitter account.”

09/29/2020 Entertainment Comments Off on Lineker criticised for voicing political views
Recent Posts
We and our partners use cookies on this site to improve our service, perform analytics, personalize advertising, measure advertising performance, and remember website preferences.Ok