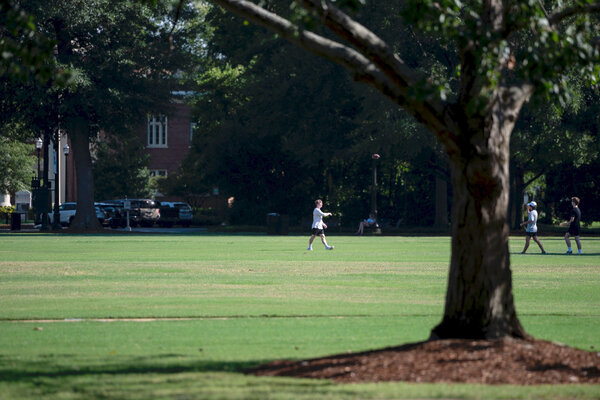 Listen to Wednesday’s episode: “Quarantine on a College Campus”

What’s it like for students who head off to college for in-person instruction this semester, only to get the coronavirus?

That’s the experience the producers Rachelle Bonja and Eric Krupke wanted to share with listeners. So they called me last week to ask about a story I had just written on how universities are trying to control Covid-19 outbreaks by moving students with infections into dedicated campus isolation dorms.

My assignment: To find one undergrad whose experience could encapsulate the lonely and stressful campus isolation treatment that thousands of sick students across the country are undergoing at their schools.

Zoie Terry, a 19-year-old sophomore at the University of Alabama in Tuscaloosa, whom I had already interviewed about quarantine dorms, agreed to take us through her ordeal in detail.

In the episode, we followed Zoie as she returned to campus and ended up coming down with the coronavirus even before classes started. She had to move to a campus isolation unit, a virtually empty dorm building, where, she told us, she felt cut off from college and from the rest of the world.

But that was not all. Zoie told us about how her mother, Lynn Terry, a former neonatal I.C.U. nurse, had played an extraordinary role in helping her through the isolation experience. So I decided to interview Lynn as well.

It turned out that Zoie’s mom Lynn was equally — if not more — anxious than Zoie. She said she was shocked that there was no university staff on site in the isolation dorm to monitor sick students’ symptoms. So Lynn decided to step in, watching Zoie sleep every night over a livestream FaceTime feed and monitoring her breathing.

Here’s part of what Lynn told us:

An Outtake from ‘The Daily’

By the time I interviewed Lynn, I had already spoken with about two dozen students about their isolation treatment at different universities. And I thought I had a handle on their experiences.

But as I listened to Zoie’s mom, I realized that I had underestimated the anxiety that having a sick child on campus can cause families — not to mention the added stress of worrying that universities are not sufficiently taking care of them.

Lynn, who is also a poet, was so troubled by her daughter’s campus isolation experience that she shared a poem she wrote about it on Twitter:

She also read some of her poetry for us in the interview. Take a listen:

An Outtake from ‘The Daily’

‘A cascade of crises piling up on the West’

A note from Jack Healy, our guest on Tuesday’s episode, “A Deadly Tinderbox”:

When I landed in Portland and walked outside into a steel-colored haze to cover the wildfires tearing across the length of the state, I knew that my face mask wasn’t going to help me anymore.

The surgical masks we’ve all gotten accustomed to wearing during the pandemic are useless against the fine particulate matter being belched out by this year’s record-breaking fires. I needed an N95 mask to filter the irritants swirling through the air from all those burning trees, homes, insulation, car seats, plastic backyard sets and every other piece of combustible material in the path of the fires.

I didn’t have a proper mask to screen out the contaminants from the fires, and as I worked my way across Oregon, I noticed that neither did most of the firefighters and residents I interviewed, even the ones directly in the path of the fire, standing directly in air that was literally too toxic for standard air-quality monitors to gauge.

I could feel the ash and smoke pulsing inside my lungs as I held my recorder up to talk to evacuees in the little rural town of Molalla, about an hour south of Portland. I could see firefighters’ eyes watering and hear them coughing as they trudged into an elementary school to grab dinner and head back out to the fire lines.

When you’re a reporter covering a crisis, you are always trying to balance the bigger picture with the action unfolding directly in front of you. In this case, there was a lot to contextualize.

The fires I witnessed were part of a cascade of crises piling up on the West — with climate change and the coronavirus compounding the out-of-control blazes’ toll.

In the middle of a pandemic, evacuees are being forced into the close quarters of emergency shelter, making people with respiratory problems particularly vulnerable to both these toxic plumes and the virus. And in the long term, climate change will make these mega-fire seasons worse and worse, forcing cities and states to confront questions about whether it is safe to allow homes to be built in fire-prone areas and whether they are doing enough to mitigate the risk to residents and firefighters.

But these fires, burning through some deeply conservative corners of Oregon, are also fueling the flames of the country’s crisis of political polarization. In these counties, climate change is still viewed with skepticism, and the fires are scorching farm fields with big Trump-Pence signs in the yards. While many residents did see these fires as a harbinger of a transforming climate, some people saw them as a freak one-off, the product of an aberrant windstorm, a burn unlike anything they’d seen in decades.

“We’re Republicans up in those mountains,” Lee Reagan told me, a few days after the trailer where he had been living burned down. His wife, Trish, said she was leaning into her faith. “I know God’s going to provide. I don’t know how yet.”

On The Daily this week

Monday: Under President Trump, Immigration and Customs Enforcement has seen its powers expanded. We speak to two filmmakers who were granted rare access to the agency.

Tuesday: The scale of Oregon’s wildfires is dizzying — millions of acres burned and thousands of people have been displaced. Jack Healy speaks to those living in the fires’ path.

Wednesday: “I just sat there and started crying.” We hear from Zoie Terry, a student at the University of Alabama, about her experience of being placed in an isolation dorm by her college after testing positive for the coronavirus.

Thursday: On the Greek island of Lesbos, a makeshift city of tents and containers housed thousands of asylum seekers who had fled conflict and hardship. This month it burned down. Matina Stevis-Gridneff on the European refugee crisis and the blaze at Moria camp.

Friday: Our producer Lisa Chow spoke to one kindergarten teacher in New York City about the city’s messy return to school, and the threats reopening poses to her immunocompromised daughter.

That’s it for The Daily newsletter. See you next week.

Have thoughts about the show? Tell us what you think at thedaily@nytimes.com.

Were you forwarded this newsletter? Subscribe here to get it delivered to your inbox.

09/19/2020 Entertainment Comments Off on Life Inside a Quarantine Dorm
Recent Posts
We and our partners use cookies on this site to improve our service, perform analytics, personalize advertising, measure advertising performance, and remember website preferences.Ok