As a teenage ballet student in the 1990s, Katy Pyle had no interest in dating: not boys, not girls, not anyone. A serious love interest — all consuming, really — was already in the picture: ballet.

“I didn’t have space for any other relationships in my life,” Pyle, who uses the pronouns they and them, said in a phone interview from their home in Brooklyn. “It’s silly, but that was my true love.”

Looking back now, at 40 — as a genderqueer lesbian and the founder of the joyful, iconoclastic ballet company Ballez — Pyle can see that relationship more clearly, how it kept them from knowing their full self. Growing up, they knew many openly gay male dancers. But in Pyle’s mind, they said, to be a ballet dancer, gay and a woman “just wasn’t a possibility.”

“I truly was a stranger to myself until I got out of ballet,” said Pyle (who notes that while they are a lesbian and feminist, they don’t fully identify as a woman). “I did not ever know a lesbian in ballet in my training, and it was hard to even find lesbians in the culture at large. There was a real lack of representation, which kept me closeted and confused.” 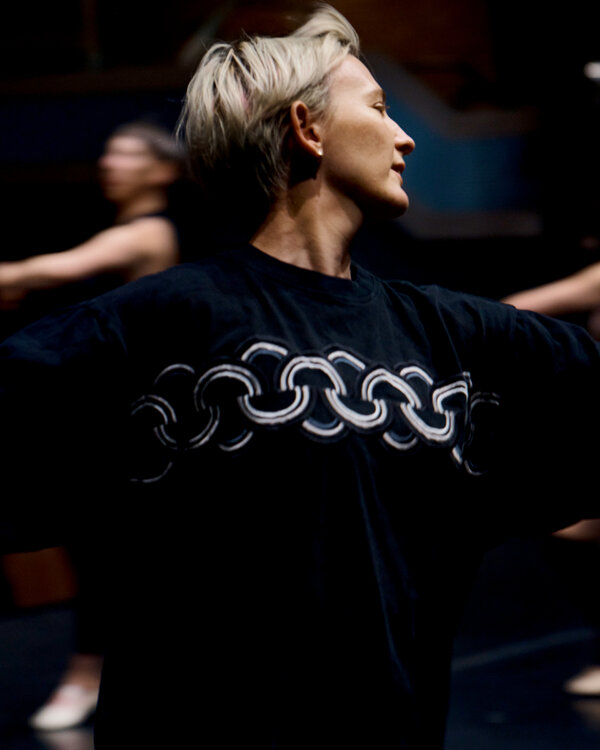 As Pyle observed from a young age, ballet — a form based in rigidly gendered aesthetic values — is not a world without queer people. But those who are most visible, and have been historically, are gay men. To be a lesbian in ballet, or queer and not a man, is often to feel like the only one, to wonder, in the words of the choreographer Adriana Pierce, who trained at the School of American Ballet: “Has anyone ever done this? Has anyone like me ever walked these halls?”

Ballet upholds narrow ideals for everyone: for men, the archetype of the chivalrous prince; for women, the elusive swan or sylph. Women are expected to look weightless (an image reinforced by the pointe shoe), men more outwardly muscular. Men learn to lift, women to be lifted. In classrooms, strict male and female dress codes often apply.

But within these confines, women typically face greater pressure to conform, in part because there are more of them; competition is steeper. As Pyle puts it: “If Katy Pyle is not living up to the expectations of how to be, there are 20 other young women who want that place.”

Challenging those expectations can be risky and isolating. But more celebrations of difference are emerging. Over the past year, aided by the downtime of the pandemic and the ease of meeting online in the age of Zoom, queer ballet dancers, in particular those socialized as women in their training, have been forging stronger networks and creating work that affirms they’re not alone.

In very different ways, two new ballet projects, both to be released online by the Joyce Theater this month, allow dancers to be their authentic selves. In a livestream on June 10, Ballez, which turns 10 this year, will unveil “Giselle of Loneliness,” a radical re-envisioning of the classic romantic ballet “Giselle.” And Pierce’s “Animals and Angels,” a short film starring the dancers Cortney Taylor Key and Audrey Malek in a duet on pointe, will have its premiere on June 21.

In a still-developing project, the dance artist and scholar Alyah Baker, 39, has been exploring her artistic lineage as a queer Black woman in ballet. For her recent master’s thesis at Duke University, “Quare Dance,” she brought together three dancers (on Zoom) who share her intersection of identities: Malek, a member of the Washington Ballet Studio Company; Key, a freelance artist in New York; and Kiara Felder, a dancer with Les Grands Ballets Canadiens de Montreal.

The dance historian Clare Croft, editor of the book “Queer Dance: Meanings and Makings,” notes that because ballet training starts so young for women, to have diverse role models is essential. “Looking up to the older girls is so hard baked into what it means to grow up as a woman in ballet,” Croft said. “So having people who are out as lesbians or queer women is exponentially more important.”

‘I want a Juliet and Juliet’

Throughout her career, Pierce, 32, who danced for New York City Ballet and Miami City Ballet, rarely encountered other lesbian ballet dancers. So last fall, when she saw an article in Pointe magazine about queer women in ballet, she instantly contacted one of the featured dancers, Lauren Flower, a former member of Boston Ballet and the founder of the blog Queer Women Dancers. Together they reached out to others with similar experiences and organized what Flower calls “a big queer Zoom call.”

“We all had the same stories of feeling isolated,” Pierce said. “I can’t overstate how life-changing it has been to talk to other people that understand.”

Through that group, Pierce met Key, who reached out to her with an idea. Key, 30, wanted to dance with another woman on pointe; would Pierce choreograph it? She already had a partner in mind: Audrey Malek. “I was like, I want to dance with Audrey, because I wanted it to be another Black woman,” Key said. “And I want to be in love. I want a Juliet and Juliet.”

Pierce was on board. The resulting duet is part of a larger initiative she has since started, #QueerTheBallet, which encompasses new experiments in ballet partnering, especially among women and nonbinary dancers. (Same-sex partnering rarely happens in ballet, but when it does, it’s more often between men.)

Malek, 23, has little patience for restrictive gender roles. “Seeing a choreographer say women aren’t supposed to lift men — well what if they can, though?” she said, referring to a much-discussed 2017 Facebook post by the choreographer Alexei Ratmansky, in which he breezily posited, “There is no such thing as equality in ballet.”

At a recent rehearsal, Malek and Key practiced lifting and supporting each other, figuring out how to position their weight.

“It’s not about how strong you are but how you use your strength,” Malek said in a conversation afterward. And Key was feeling like herself in a new way. “I’ve only done one other dance where I played a lesbian,” she said, “but it was contemporary, and I wasn’t out, and I didn’t want anybody to know, so I didn’t attack it the same way. Now I’m more invested, and it’s freer.”

‘I had to be more one or the other’

Baker, who grew up dancing in Raleigh, N.C., and Pittsburgh, describes her experience of coming out to her ballet colleagues as relatively painless. She had just graduated from college and moved to California to dance with Oakland Ballet. In the company, she said, “I was around a bunch of gay men who took me under their wing and were like, ‘Yeah girl, this is OK.’”

Her only discomfort, Baker said, was that “my queer identity and my dance identity felt really separate. I just didn’t see other queer folks that identified like me within ballet.”

In 2017 Baker created Ballet for Black and Brown Bodies, a class designed to be as inclusive as possible, especially for queer and transgender people of color. In a similar spirit, “Quare Dance,” a project she plans to develop further, embraces all the layers of her identity. “In some feminist and queer movements, race can sort of be extracted,” Baker said. “The specificity of how that might make the experience different is not always highlighted. And then in ballet, race is just a major complicating factor.”

“Often,” she added, “I’ve felt I had to be more one or the other” — more Black or more queer — “depending on what space I was moving through. I really just wanted a space where all of those pieces could coexist in harmony, without needing to choose.”

Working with Key, Malek and Felder over Zoom, Baker invited them to reflect on who they are through writing and improvised movement. “It helped me tap into a really comfortable place within myself,” Felder said. “It made me a stronger artist.”

‘This has always been here’

Over the past decade, Ballez — described on its website as a place for “all the queers that ballet has left out” — has been playfully reinventing canonical story ballets. For inspiration, Pyle has looked to the shadows of queer ballet history, a process of “finding my dancestors,” they said.

In their research, they were surprised to discover the feminist and gender-bending work of the choreographer Bronislava Nijinska, in particular the garçonne character in her 1924 ballet “Les Biches.” Created for the ballerina Vera Nemtchinova, that androgynous role is a rarity for women in ballet.

“It was shocking and also affirming and angering,” Pyle said, “to think, ‘Wow, this has always been here. What I’m doing is not new. It’s just been made invisible.’”

Pyle’s early breakup with ballet — they left after high school and dived into experimental dance, before a reunion in the form of Ballez — had to do with gender expression and body image as much as sexuality, though all of it was intertwined. In their early teens, Pyle felt drawn toward “jumping really big, using force in my movement,” they said. “And that was definitely criticized.”

“I was always being told to lose weight and get smaller,” they added. “My teachers said to me, ‘You would have had a great career if you were born a boy.’”

In Pyle’s rethinking of “Giselle,” the love interest who betrays Giselle (Albrecht) is ballet itself. The work is a series of solos for seven cast members, versions of Giselle’s famous “mad scene,” that stem from exploring — and transcending — how ballet has betrayed each dancer.

The dancer MJ Markovitz, 22, who is nonbinary, has come up against the bifurcation of ballet training: for instance, asking to take men’s ballet class and being told they couldn’t. In their “mad scene” solo, Markovitz said, they are “harnessing the strength I’ve always had, the power that’s inside of me — trying to let go of these gendered expectations on both sides.”

“I think maybe everyone does that in their own way in their solo,” Markovitz added, “just embraces the truest, fullest, most authentic picture of themselves.”

That’s Pyle’s hope for the dancers of Ballez — and for all who love ballet. “It should be a given that we’re allowed to be ourselves and still do ballet,” Pyle said. “You should be able to be any version of a human that you are, and that you want to be, and do the art form that you love.”

06/01/2021 Entertainment Comments Off on Lesbians in Ballet: ‘Has Anyone Like Me Ever Walked These Halls?’
Recent Posts