History in the Making

Donald Trump Jr. has been subpoenaed to testify in front of the Senate Intelligence Committee, where he’ll be asked about meeting with Russians in 2016. The late night hosts took the opportunity to skewer President Trump’s eldest child, the first of Mr. Trump’s children to have been subpoenaed.

“It’s also the first time Don Jr. has been ever been picked for something before Ivanka.” — JIMMY FALLON

“When Don Jr. asked his dad, ‘What’s a subpoena?’ The president was like, ‘She’s a teenage witch.’” — JIMMY FALLON

“President Trump held an impromptu press conference today and said he was very surprised that his son Don Jr. has been subpoenaed by the Senate, adding, ‘Honestly, I thought he was already in jail.’” — SETH MEYERS

Seth Meyers found it funny that the president says politics are not his son’s field of expertise.

“Here’s my question: What is his expertise? Because it’s definitely not business, politics, speaking, spelling, standing or writing.” — SETH MEYERS

Not to Be Confused With the White Socks

The White House hosted the World Series-winning Boston Red Sox on Thursday, although only part of the team showed up. “The white ones,” Kimmel noted. “That’s not a joke.”

“Trump hosted only some of the Red Sox, because at least 10 players, all Latino or African-American, elected not to attend. Yeah. Apparently they didn’t want to be in a place associated with racism, other than Fenway Park.” — STEPHEN COLBERT

The White House website made an unforced error on Thursday, welcoming the team as the Boston “Red Socks.”

“There’s no detail too small for them to screw up.” — JIMMY KIMMEL

Adding to the mistake, the White House also referred to the Red Sox as the 2018 “World Cup Series Champions.” Kimmel joked, “Well, I guess they won baseball, Nascar and a soccer tournament.”

Stephen Colbert pointed out that as a lifelong Yankees fan, Trump was able to say nice things about other teams.

During a rally in Florida on Thursday, Trump told supporters that the Mueller report showed “essentially no collusion.”

“Essentially? That’s a new one. [Imitating Trump] ‘It’s like I’ve always said, the Mueller report gave me complete and total exoneration — sort of. Kind of sort of.’” — STEPHEN COLBERT

“That’s like a waiter walking over and going, ‘Here’s your salad. There’s essentially no E. coli in it.’” — JIMMY FALLON

“There are 10 counts of obstruction outlined in the Mueller report. That’s like Moses coming down from the mountain and saying ‘Just talked to God. Essentially, no commandments. Now I’m going to ride the golden calf! Yee-haw!’” — STEPHEN COLBERT

Stephen Colbert is such a fan of “Veep,” he appeared as a co-star in a crossover when the entire cast came to “The Late Show.” Selina Meyer was not a fan. 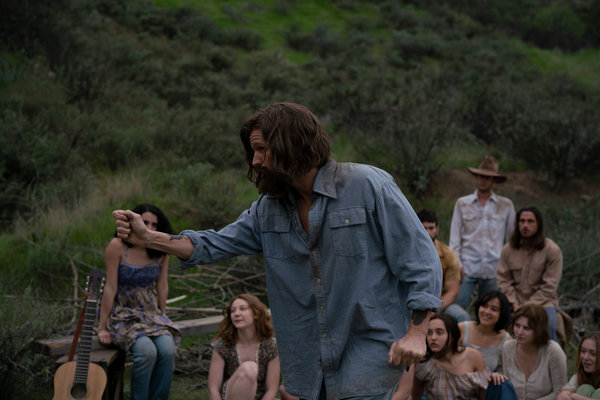 “Charlie Says,” a new movie about the murderous cult led by Charles Manson, focuses on three of his female followers who are still in prison. In this week’s Critic’s Pick, Manohla Dargis details how the film reveals the disturbing ways in which Manson persuaded these women to participate in unthinkable acts, and how it shows them as both victims and victimizers.