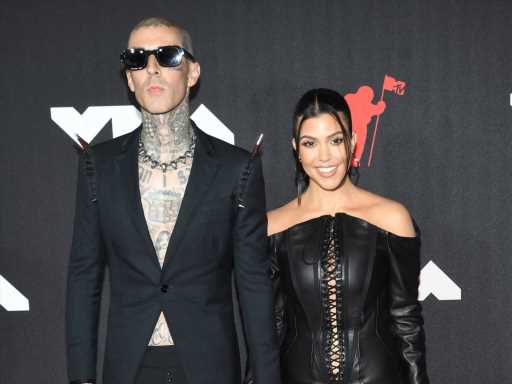 Did Kourtney Kardashian marry fiancé Travis Barker on Sunday, just hours after they attended the Grammys? Well, maybe… or maybe not, it depends on the Kardashian source and which media outlet they’ve spoken to.

TMZ was the first site to break the news that the couple walked into the One Love Wedding Chapel in Las Vegas around 1:30 a.m. on Monday. They brought their ever-present security team and a personal photographer along with them —  and then, this is where the story has several different endings. The outlet originally reported that they had a marriage license with them, which is absolutely necessary to make the ceremony legal, but they have now updated their site saying Kravis “hadn’t gotten a license and only did it for fun.”

What everyone can agree upon is that a 30-minute ceremony (legal or not) did take place with an Elvis impersonator presiding over the surreal moment. “They paid and they requested Elvis Presley, that was mandatory. I called back 5 minutes later and was like, ‘I got an Elvis,’ and there they were,” the chapel owner Marty Frierson explained to People. “They came, got married, tossed the bouquet in the driveway, and danced to Elvis. They showed a lot of love and had a lot of fun.”

The couple has not confirmed the news on their social media accounts, nor have their reps given a statement about Kardashian and Barker’s Monday morning shenanigans. Given that this would be the Poosh founder’s first marriage, we have to imagine that momager Kris Jenner would want an elaborate affair (for the TV cameras), so this Las Vegas elopement feels a bit like a stunt. But for now, we wait until Kravis shares the real news.