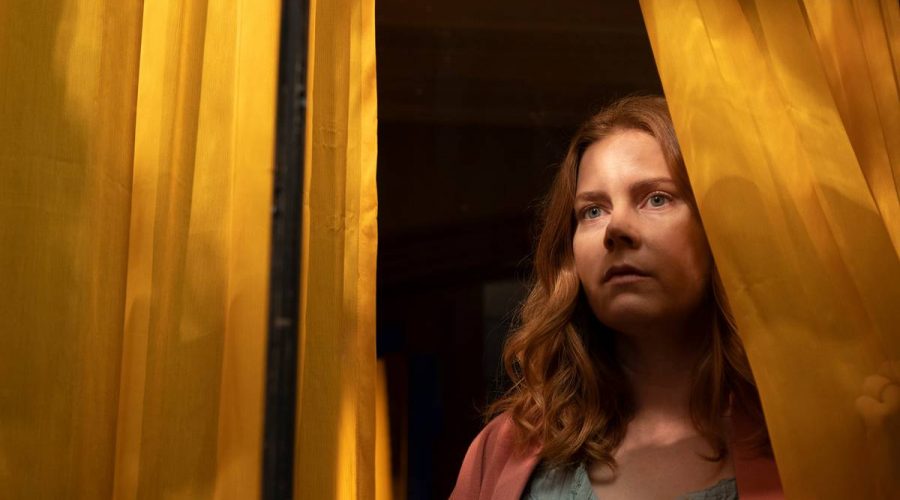 Netflix’s new thriller The Woman in the Window is a very good movie right up until the moment it isn’t.

It starts off great; a little weird, a little dizzying and a lot claustrophobic as the outside world shrinks to become just a view seen from behind a pane of glass.

Time also feels distorted as Amy Adams’ agoraphobic character Anna Fox finds herself psychologically trapped inside her house and living in a woozy haze of prescription drugs and bottles of wine. This is a combo not recommended by doctors and one that sees her staring out the windows of dark lonely rooms spying on her neighbours across the street or passing out in a foggy stupor on her couch while watching old movies on the telly.

Separated from her husband and daughter she goes nowhere and sees no one bar the occasional pop-in from her often-away tenant who lives in the basement flat and her visiting psychiatrist who has spent the past 10 months unsuccessfully helping her through a mental breakdown and the onset of her agoraphobia.

As we watch a strung out Fox shuffle her way through dimly lit rooms from a variety of oddly skewed angles her quite desirable old-style New York townhouse takes on a sinister quality as her anxiety and paranoia grows.

The film does a fantastic job of making you feel as disorientated and uncertain as Fox – more so when a new family moves in the building opposite and the young teenaged boy knocks on her door to deliver a new-to-the-neighbourhood present from his mum.

He’s awkward but the pair strike an unlikely friendship, which blossoms when she meets his mum Jane, a vivacious, charismatic woman who also enjoys an evening in the company of a bottle of wine.

Later, she’s habitually spying on her new friends from the dark of her room when she sees Jane in a heated argument with someone hidden by a wall. She’s suddenly pushed across the room and when she stumbles up she’s stabbed repeatedly by the unseen assailant.

Fox freaks out, calls the cops and, in a dizzying and swirling sequence, attempts to leave her house and run to Jane’s aid. She only gets as far as the footpath before she’s mentally overwhelmed and faints.

When she wakes she’s back in her house with two detectives and her very shouty neighbour Alistair Russell who is very unhappy about Fox reporting the violent murder of his wife Jane who is standing, quite alive and unstabbed, beside him. This also happens to be an entirely different woman from the Jane who Fox had been drinking with earlier and witnessed being butchered to death.

This is unquestionably the high point of the movie. As Fox’s groggy reality gets abruptly exposed to the harsh light of people who don’t live in a medicated daze, you – and Fox -lose any grasp of what you thought was going on.

The always excellent Gary Oldman gives Russell an aggressively unpleasant and unlikeable edge but is he really elaborately staging some sort of gaslighting campaign on his nosey neighbour? And why is her tenant, who at first seemed nice, now intimidating? Is Fox’s booze and pills lifestyle causing her to lose an already tenuous hold on reality?
As a viewer you’re left in the deliciously unsettling spot of not knowing what is real and what is delusional.

And then… the film’s obfuscated reality comes into focus like grey fog clearing on a winter’s morning to reveal that the mysterious lurking object at the end of your driveway is nothing more menacing than a wheelie bin stuffed with trash and waiting for the rubbish truck.

All the work put into crafting a taut and interesting psychological thriller is cast aside in favor of a cheap slasher set-piece and an explanation that’s as improbable as it is ridiculous.

It’s hugely disappointing because Adams and Oldman are both terrific and the film’s unsettling first half genuinely kept me gripped. But, just like its protagonist, The Woman in the Window is clearly not ready to venture outside.

05/20/2021 Entertainment Comments Off on Karl Puschmann: Is Netflix’s thriller The Woman in the Window worth a look?
Recent Posts