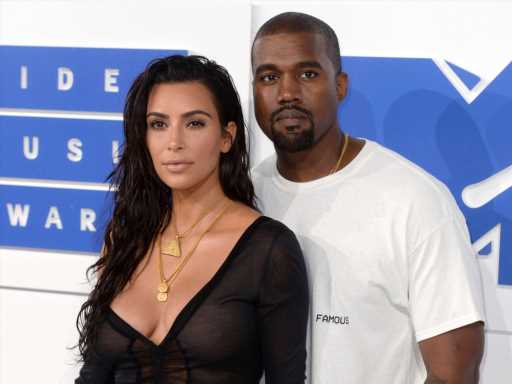 It’s been more than six months since Kim Kardashian filed for divorce from her husband of nearly seven years, Kanye West. And based on a new interview, someone may have to remind the “All Of The Lights” rapper of that fact. While speculation continues to grow around Kardashian’s reported recent dinner dates with Pete Davidson, West claimed in a new interview that he and the Keeping Up With The Kardashians alum are still very much married.

The Donda rapper joined Revolt TV‘s “Drink Champs” just after Kardashian’s Saturday Night Live hosting gig — which he wasn’t apparently the biggest fan of either (but more on that later). While chatting about all things career, family, even life philosophy, West opened up about how Kardashian supported him during a challenging moment in his life, and referred to her as his spouse. “My wife — ’cause she’s still my wife — ain’t no paperwork,” the rapper told the co-hosts.

West — who shares children North, 8, Saint, 5, Chicago, 3, and Psalm, 2, with Kardashian — doubled down on his assertions, and even took a jab at at the sketch comedy show Kardashian hosted last month. “SNL making my wife say ‘I divorced him’ on TV because they just wanted to get that bar off. I never even seen the papers. We’re not even divorced,” he insisted.

In the months since Kardashian filed for divorce from West, the two have seemingly maintained an amicable relationship. The SKIMs mogul even attended a few of West’s Donda listening parties, at one point donning what appeared to be her wedding dress when she joined him during one of his performances. As for the rapper, he feels the two are still very much together, it seems. Should someone tell Pete Davidson?