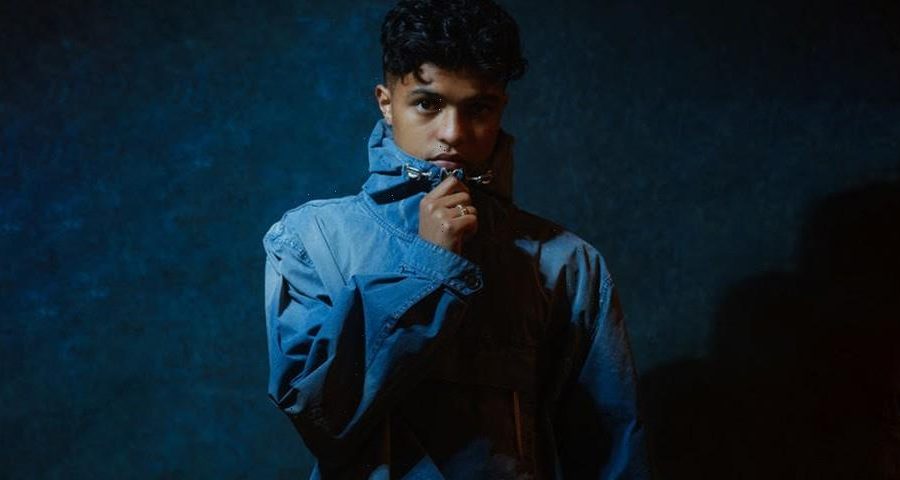 Now we’re in 2023, the Coronavirus pandemic feels like a lifetime ago. But despite life being brought to a standstill during this period, many UK creatives refused to slip into a state of inertia.

For musicians, that time of existence was arguably one of the most difficult and confusing periods. Live shows were a no-go, fan interactions were limited to live streams, and any form of in-person networking for up-and-comers was officially out of the window.

But for British pop-R&B artist, Kamal., the pandemic would inspire his breakthrough – with the 20-year-old using his music to convey the lonely vulnerability that everyone was experiencing at the time.

After experimenting with a piano at an early age – before working with a ukulele – Kamal.’s first live performances – after his successes at school talent shows – were in pubs in his locale in North-West London. When the pandemic struck, his lockdown-induced War Outside EP took off; gaining kudos from the likes of Billie Eilish and even scoring the artist a collaborative record with one of the UK’s biggest rappers: Dave.

Kamal. is much more than just a product of the pandemic – his talent was always bound to grab people’s attention. But with everyone on their phones, this process was accelerated tenfold. Having your world flipped upside down is difficult for anyone to handle, especially when you’re a teenager. But with this in mind, Kamal. is a product of hard work, talent, and musical (and personal) maturity that is way ahead of his years.

Now, Kamal. is ready to move into the next phase of his career. His latest emotive single, “essential,” arrives with candid, VHS visuals that find the rising artist opening up on romance, break-ups, and wearing his heart on his sleeve. As melodic as it is mindful, the track has cemented Kamal.’s status as one of the most exciting artists to watch out of the UK this year.

Hypebeast caught up with Kamal. to find out more about his creative processes, working with Dave, his upcoming project, So Here You Are, Drowning, and his musical journey so far.

Hey Kamal. Music aside, how are you right now?

I’m good. It’s quite hard to answer that question without intertwining it with career stuff because they’re so closely aligned. This is because what I’m doing in my life influences my music and vice versa. I’m just floating through, spending time with friends, and enjoying the moment.

Everyone I’ve spoken to who has been in a similar position to I am now has said that they have coasted through their free time without appreciating it. So, whenever I get time to relax, I’m just enjoying it.

Currently being a young musician at the very start of your career, are there any olders that give you advice on navigating the industry?

I think Dave has been one of the main ones. Within my team, my manager has been great – which I don’t say that in interviews a lot [laughs] but, I feel like my team in general has been really supportive. I haven’t felt as lost and confused, which I know is a big thing for younger artists.

From the artist side, Joy Crookes has given me some advice, which was really appreciated. She told me that I need people around me that will look out for me and not forget where I come from. It’s important to have reminders as you go through the process.

When you hear that you’re making a song with Dave, it could be very easy to feel overwhelmed or to chicken out.

How have you managed to stay grounded during this rapid rise at the start of your career?

Rather than having rituals, I have an overall mindset – it might be a bit of imposter syndrome but I don’t feel too connected to the “success” that I have achieved so far. I view it as more of a crazy thing that isn’t very logical but it’s happening in my life.

I’m still the same guy who’s got the same friends and has the same conversations. In a sense, I always view it as a surprise when good things happen. It’s difficult for me to comprehend, but that simultaneously keeps me working harder.

What was your main source of inspiration when you were a child?

I began to play piano when I was really young because my family got one for free from a family friend. That was a cool introduction to music – learning classical piano – because that really builds your sense of how music can be structured, how chords work, and the more technical stuff. I feel like I got a bit of a head start learning that and that of course helped when it came to songwriting.

Then there was a guy called Will who taught the ukelele in primary school – that’s where I really began writing songs, it was easy to find chord progressions to just loop and freestyle melodies over.

I found it freeing and enjoyable. I then performed songs in the little school talent shows, combined songwriting with the piano, and then began working in a studio with another family friend — I wrote a song for a school project and we decided that we needed to record it as a live session. That was my first studio experience, and since then it’s just naturally become a weekly occurrence.

If you weren’t a full-time musician, where do you think you would currently be?

I would be studying English Literature at university. Aside from the sonics of music, I just love writing in general. I feel like it’s such a necessary part of my expression as a human being. I write a lot – even away from music. I write selfishly sometimes, I use it as a way to escape from my life and as a way to express my emotions, whether that is through music, a journal, or writing poetry. I think that’s where I would have guided my life, without the sounds.

How in tune do you believe you are with your emotions?

If I’m feeling extreme emotions – either positive or negative – it’s going to play a part in the music that I write. I wouldn’t be able to make a pop banger if I’m sad. I try and let the music guide me where it goes. I often have a chord progression playing constantly and I freestyle melodies.

I then work out the sounds of melodies and the shapes of words and from there, I fill in the gaps so that they become fuller words of similar shapes. At that point, I often work out where the song is going, but it’s usually from one line. I try not to overthink at that point in the process. But, I often have something in the back of my mind that I want to write about.

I think the music is a more well-rounded account of a person who is growing as opposed to a teenager who’s stuck inside.

How do you think your following us growing, would you say you’ve now got a cult fan base?

I think if it’s not there, it’s in the process of being made. I feel like I am quite an internet-savvy person, I spend quite a lot of time on it and one of the things that I enjoy most is interacting with the people that are messaging me about the music or are posting about drops or older music. I think we’re in the process of building it, so we’ll see the results soon.

Your biggest breakthrough to date came when you featured on Dave’s smash-hit single “Titanium” how was that process and how did the two of you connect?

It was pretty direct, he was sending me stuff by text message and I was pinging it back on the same night. It was surreal, I’ve said it before but there was a period during secondary school when I would eat breakfast while watching his Fire In The Booth freestyle.

So, to go from that to having a song with him is pretty crazy. I have so much respect for him as an artist and the place that he holds in this UK scene. I’m just glad that I was able to make something that I am happy with and something that other people have tapped into and given great feedback on. When you hear that you’re making a song with Dave, it could be very easy to feel overwhelmed or to chicken out.

The space where you are in your life can direct or shape the music that you’re making.

You’ve just announced that your new mixtape, So Here You Are, Drowning, is coming in March. Talk to us about your journey towards that and what we can expect sonically on the project.

The space where you are in your life can direct or shape the music that you’re making. I say that to say that I was in a relationship for the majority of this year where I was making and finishing a lot of these songs. My perspective from that was shaping the sounds I was making and that made it feel very cohesive as a body of work without me having to think consciously and directly about what I was having to make.

I think that I moved quite naturally to the theme of the project, although there are parts and times when I have had to step back and work out things that have needed to change. But, for the most part, it’s quite a natural process to make the music feel the same if it’s made during a similar time.

How does it differ from your previous project, War Outside?

A lot of that was made during the lockdown and generally, the way that I was feeling and the life that I had lived during that time was a lot less than what it is now – and I think that’s quite clear in the music. Now, I think the music is a more well-rounded account of a person who is growing as opposed to a teenager who’s stuck inside. I hope that’s evident, it is definitely clear in the production that it is more polished and interesting.