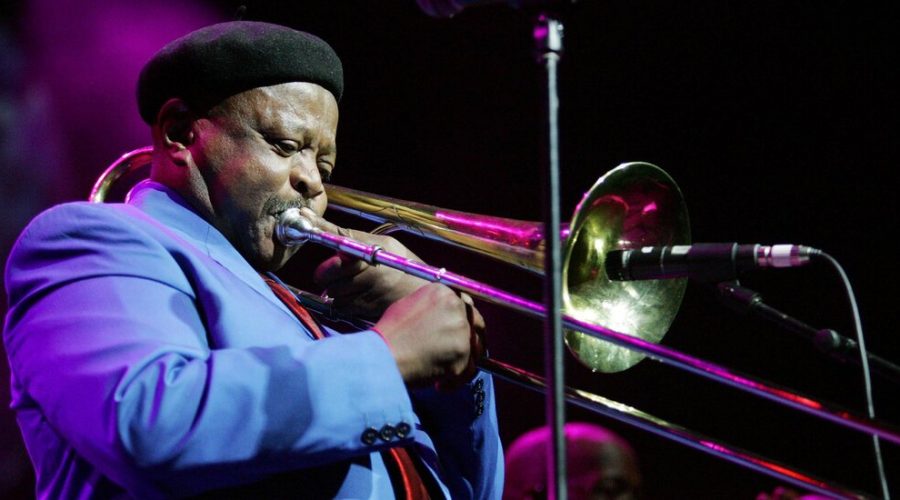 Jonas Gwangwa, a pre-eminent South African trombonist, vocalist and composer who became a leading artistic ambassador for the anti-apartheid resistance, died on Sunday. He was 83.

The office of President Cyril Ramaphosa announced the death in a statement, but did not say where he died or what the cause was. Mr. Gwangwa had been in poor health for some time.

Calling him “a giant of our revolutionary cultural movement,” Mr. Ramaphosa wrote, “Jonas Gwangwa ascends to our great orchestra of musical ancestors, whose creative genius and dedication to the freedom of all South Africans inspired millions in our country and mobilized the international community against the apartheid system.”

Mr. Gwangwa died exactly three years to the day after the death of the trumpeter Hugh Masekela — Mr. Gwangwa’s classmate as a youngster, his bandmate as a young adult and his fellow national hero in later years.

Mr. Gwangwa’s crisp and graceful trombone playing was marked by its tightly slurred notes and peppery rhythm. By his early 20s, he had become known as the leading trombonist on the Johannesburg jazz scene: He was in the ensemble of the smash hit musical “King Kong,” South Africa’s first jazz opera, composed by the musician and writer Todd Matshikiza and based on the life of a boxing champion; and with Mr. Masekela, he helped found the Jazz Epistles, a sextet of young all-stars whose 1959 LP, “Jazz Epistle: Verse 1,” signaled a turning point in modern South African jazz.

He left the country in 1961, on tour with “King Kong,” and remained in exile for 30 years. But he stayed closely involved with the anti-apartheid struggle being led by the African National Congress. In 1980, at the request of the A.N.C.’s leaders, he assembled the Amandla Cultural Ensemble, the party’s official artistic group, which toured the world, helping to build support for the movement.

“It was something exciting, because everybody was ready for the gun — but this was a different gun,” Mr. Gwangwa said in a 2016 interview on South African television.

“O.R. Tambo had said it: We’d been here for 20-some-odd years and everything, trying to talk to the international community about our struggle, but here Amandla does it in two hours,” he added. “Because we’re talking about the life of the people. We’re putting that onstage.”

Together with George Fenton, Mr. Gwangwa composed the music for “Cry Freedom,” Richard Attenborough’s 1987 film about the South African revolutionary leader Steve Biko. The soundtrack was nominated for an Academy Award, and the film’s theme song earned both Oscar and Grammy nods. 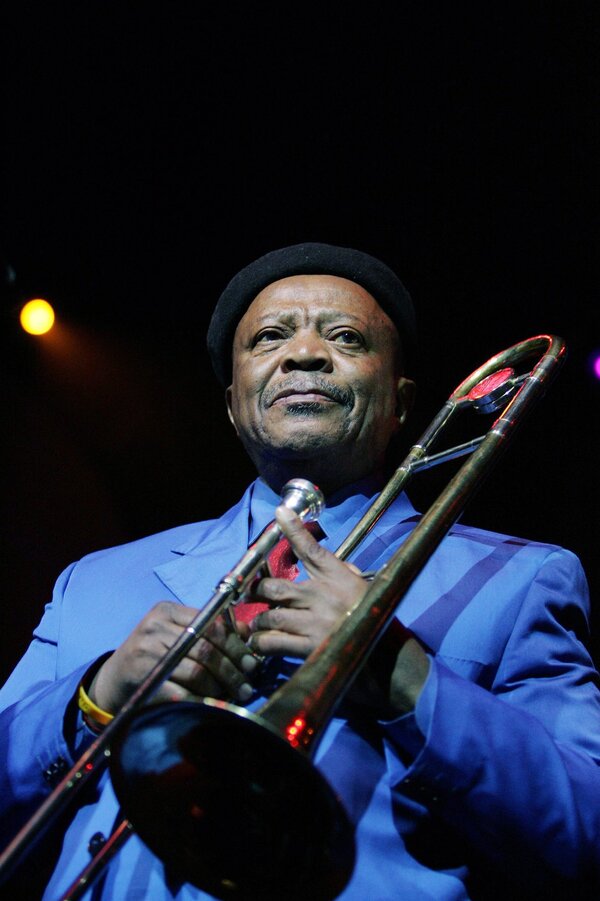 Jonas Mosa Gwangwa was born on Oct. 19, 1937, in Orlando East, a township of Johannesburg, and grew up surrounded by song. His parents played records around the house; one of his two older sisters was a concert pianist; the family often came together to sing hymns.

He studied at St. Mary’s elementary school in Orlando and then at nearby St. Peter’s, a premier high school for Black students. In 1954, he was given his first trombone by Archbishop Trevor Huddleston, an Anglican missionary and social campaigner, who also put Mr. Masekela’s first trumpet (donated by Louis Armstrong) in his hands.

Jonas had hoped for a clarinet, but he made use of what he got. “I’m a self-taught musician even in just holding the instrument. I saw from a Glenn Miller picture how to hold it,” he was quoted as saying by Gwen Ansell in her book “Soweto Blues: Jazz, Popular Music and Politics in South Africa” (2004).

He met his future wife, Violet, when the two were teenagers. For almost 70 years, their relationship endured through exile in various countries; for extended periods they were unable to see each other. But in 1991, with apartheid toppled, they finally settled back in South Africa, surrounded by their children.

Ms. Gwangwa died just weeks before her husband. Four sons, three daughters, and a number of grandchildren and great-grandchildren survive.

As soon as he could play, Mr. Gwangwa was swept up in the jazz boom in Sophiatown, a racially mixed Johannesburg neighborhood where a vibrant youth culture emerged in the postwar years.

Together with Mr. Masekela and the saxophonist Kippie Moeketsi, he journeyed to Cape Town to seek out Dollar Brand (later known as Abdullah Ibrahim), a young piano phenom whom musicians in both cities were talking about. When they found him, the Jazz Epistles were born: six blazing young talents, all fascinated by American bebop but intent on giving voice to the cosmopolitan imagination of young South Africans.

In 1960, police in the Sharpeville township massacred a group of protesters against apartheid restrictions. A harsh government crackdown followed in all realms of society. After touring with “King Kong” in London, Mr. Gwangwa remained abroad, eventually moving to New York to enroll at the Manhattan School of Music.

He roomed with Mr. Masekela for a time and became increasingly active in the milieu of A.N.C.-aligned expatriate artists. He helped to edit the speech that the poet Keorapetse Kgositsile, an old friend, wrote for the vocalist and activist Miriam Makeba to read before the United Nations in 1963. He was the arranger of a Grammy-winning album by Ms. Makeba and Harry Belafonte, and he performed at the 1965 “Sound of Africa” concert at Carnegie Hall, alongside Mr. Masekela, Ms. Makeba and others. He also led his own ensembles, including African Explosion, which released one album, “Who?” (1969).

Mr. Gwangwa’s apartment in New York became a meeting ground for fellow musicians and activists, fondly referred to as “the embassy.”

In 1976, after a stint in Atlanta, Mr. Gwangwa moved with his family to Gaborone, Botswana, where he founded Shakawe, a group of exiled South African jazz musicians, and became a member of the Medu Art Ensemble, an interdisciplinary collective engaged in the anti-apartheid struggle. In 1977, he appeared in Lagos, Nigeria, at the Second World Black and African Festival of Arts and Culture, known as Festac, a historic gathering of representatives from around the African continent and across the diaspora. Taking in the range of talent on hand, he decided to organize the South African performers into a unified multidisciplinary production. They were a hit.

He was later summoned to Angola, where he met with A.N.C. leaders and soldiers in the party’s armed wing, uMkhonto weSizwe, known as M.K. They commissioned him to write a full musical telling the story of South Africans’ heritage and the continuing freedom struggle, and he assembled a cast of musicians, dancers and other performers made up of M.K. soldiers and other expatriates. It became the A.N.C.’s flagship arts ensemble, the Amandla Cultural Ensemble.

For the next few years Mr. Gwangwa alternated between rehearsals in Angola, tours around the world and home in Botswana. But his prominent role in the movement placed a target on his back. In 1985, the South African Defense Force staged a raid on the M.K. and organizers in Gaborone. Mr. Gwangwa’s home was bombed.

He and his family moved to London, then to the United States. As the apartheid government fell, they returned home, and Mr. Gwangwa received a heroic reception. In 2010, he was awarded the Order of Ikhamanga, South Africa’s highest honor for contributions to the arts and culture. The only other recipient that year was Mr. Masekela.

He released a few standout late-career albums, including “A Temporary Inconvenience” (1999). But his proudest accomplishment remained Amandla, as he told Ms. Ansell in a recent interview.

“Because it involved all the things in music that excited me the most, and gave me the opportunity to bring them together,” he said, “for the most important reason possible: It was for the people.”