“Legend is just a name. I know better than to be so proud.“

Humility, there. Not something you always associate with Oscar-winning musicians, but that’s John Legend in a nutshell.

When we meet in a posh London hotel, the star offers a cup of tea, then asks if my phone needs charging (he carries a brick-sized battery with him at all times).

Quietly-spoken, but sharp and intelligent, he carries none of the usual pop star baggage. There’s no entourage, no sunglasses, no restrictive interview demands.

As he says in one of his songs: “I won’t drink in all this fame.”

The lyrics are from I Know Better, an instant highlight of Legend’s new album, Darkness and Light.

Co-written with Will Oldham (better known as singer-songwriter Bonnie “Prince” Billy) the song is a simple, gospel lament that finds Legend confessing: “They say sing what you know – but I’ve sung what they want”.

As the song ends, he resolves to write from the heart, then segues into one of his most political songs to date.

Penthouse Floor is “talking from the perspective of someone who lives on the wrong side of town, and is invisible to the powers that be,” says Legend

“The only time people notice his neighbourhood is when there’s a police shooting and there’s protesting in the streets.

“It’s a reaction to housing segregation and the ghetto-isation of certain communities – how people ignore poverty and despair in certain neighbourhoods.” 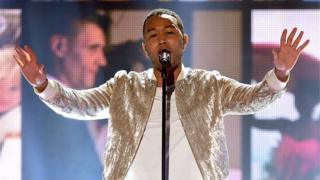 We discuss this in late October, at a point when Hillary Clinton commands a lead in US opinion polls.

Legend recognises that large numbers of people feel disenfranchised and “ignored by the elites”, but he cannot foresee a Trump victory.

Since the result came in, he has lambasted the president elect as a “fantasist unmoored from reality”.

His comments earned him flak on right-wing websites, while his Twitter replies are swimming in bile – but Legend is unrepentant, repeatedly warning followers to “stay vigilant”.

But the star won’t be channelling that anger into his work.

“I try to write about universal themes and feelings, and when you get political, you lose some of that because people start aligning into camps,” he says.

Besides, “it’s hard to make music that says what I want to say politically, in a way that works musically”.

“If you look at what I tweet about, it’s generally very policy-driven. Talking about the criminal justice system and how we need better district attorneys doesn’t always work so well in a song.”

Instead, he prefers social commentary over “preachy” polemics. Even Penthouse Floor can be mistaken for a “sexy uptempo song” if you don’t pay attention to the lyrics, he says.

Still, for those paying attention, Legend’s political views are apparent: He contributed to the 12 Years A Slave soundtrack and won his Oscar for Glory, from the Martin Luther King biopic Selma.

Last year, he helped produce Southside with You, a film about Barack and Michelle Obama’s first date (he’s not sure whether the president has seen it “but they invited me to a state dinner the other day, so I’m pretty sure they don’t hate me!”).

His 2010 album, Wake Up, resurrected protest songs from the 60s and 70s, soaked in the language of the civil rights movement that felt disappointingly relevant at 30 years’ distance.

Recorded with hip-hop band The Roots, it remains Legend’s best album since his debut, Get Lifted. He sought to recreate the gritty vibe on Darkness and Light, seeking the help of Blake Mills, a rock producer best known for his work with southern rock revivalists Alabama Shakes.

“He really pushed me,” says Legend. “We made choices about the instrumentation that were different to my previous solo albums. This is the first time I’ve worked with live drums and a consistent rhythm section for an entire album since Wake Up.

“I think we got so electronic over the last 10 years, so driven by pop and dance, that a lot of people are going back to their roots. We had a huge recession and we were making some of the most escapist pop music in that time. And now, as the economy’s getting better, people are getting back to basics.

“Maybe music works like that – it’s the opposite of the financial cycle.”

The uncluttered, organic arrangements lend themselves to Legend’s more socially-conscious songs, notably March into the Darkness, which reflects on the sacrifices made by Martin Luther King, Medgar Evers and other civil rights activists.

“What good is a dream when the dreamer dies?” he asks in the chorus.

“I don’t have any firm belief in the afterlife,” explains the singer. “So in the song I’m like, ‘Is it worth it to die for a cause?’

“I guess my resolution at the end is, ‘You know what? You got to go for it. You’ve got to struggle, and try to make the world better… We might as well go ahead and march into the dark.'”

Despite Legend’s activism, it is love songs that have made his career – in particular All of Me, a lovestruck paean to his wife, supermodel and TV host Chrissy Teigen.

When he first played it to her, she burst into tears. The rest of the world was similarly moved: All of Me spent a staggering 92 weeks in the UK singles chart and is now, according to Spotify, the fourth most-played wedding song on the planet.

Legend met Teigen on the set of the video for his 2007 single Stereo and they dated for seven years before finally tying the knot on the banks of Italy’s Lake Como in 2013. But in case this all sounds too perfect, watch Teigen’s hilarious account of Legend’s proposal.

Seven months ago, the couple welcomed daughter Luna, their first child. She has inspired two songs on Darkness and Light, and even cameos in the video for Love Me Now – alongside footage of couples holding hands at the memorial outside Orlando’s Pulse Nightclub, where 49 people were killed in June, and the Domiz Refugee Camp in Northern Iraq.

It reflects the song’s message – don’t take your loved ones for granted.

“I don’t know who’s going to kiss you when I’m gone,” Legend sings over percussion and piano. “So I’m going love you now, like it’s all I have.”

“Darkness is always lurking,” says the singer. “I’m saying, ‘this might not work out, but let’s enjoy it while it lasts’.”

He admits there have been “challenges” in his relationship with Teigen, but they both “try to work on what’s wrong”.

“All of us are selfish, especially in our 20s when we’re still building our career,” he says. “As you get older, you realise you have to care about other people’s feelings.

“And then having a kid certainly changes things. They require a lot of energy and thought and time, and you can’t be selfish any more.”

In fact, Legend turns out to be quite the domestic demigod – thanks largely to his mother, who homeschooled the musician and his siblings (two brothers and a sister) in 1980s Ohio.

“I’m not the best at making the bed but I love to cook with Chrissy and help her in the kitchen. I do some chopping. I boil some water. Or she’ll just put me in charge of making a sauce from her book.”

Ah yes, Teigen’s book. It’s crammed full of salty, sticky, crunchy recipes: French toast casserole; burgers with courgette fries; pizza jalapeno poppers. The sort of thing, in other words, you can’t imagine crossing the lips of a couple who are photographed on a daily basis.

“Well, you have to do it in moderation,” Legend grins. “She’s not cooking opulent meals every day. A lot of times it’s just a nice fish and vegetables.

“You can’t be decadent all the time.”

John Legend’s album, Darkness and Light, is out on Friday. He plays at the BBC Music Awards on Monday, 12 December.

10/01/2020 Entertainment Comments Off on John Legend on Trump, racism and fatherhood
Recent Posts
We and our partners use cookies on this site to improve our service, perform analytics, personalize advertising, measure advertising performance, and remember website preferences.Ok