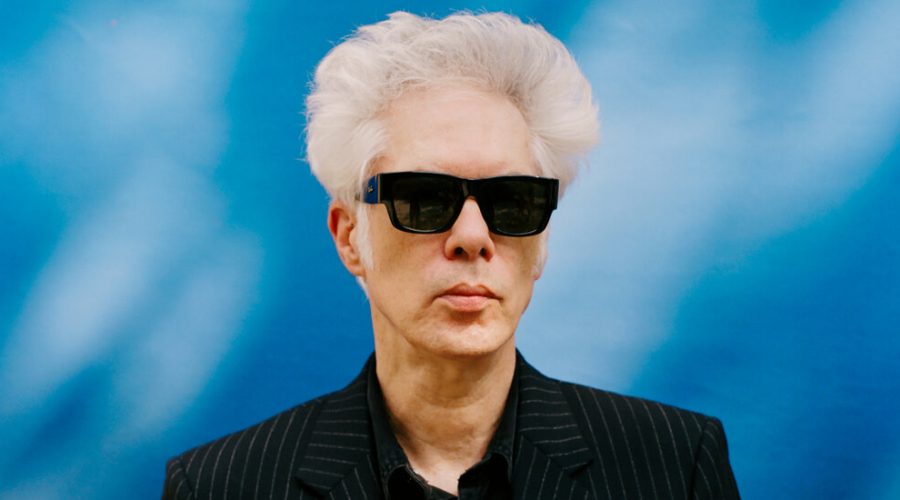 Jim Jarmusch likes removing the heads. He likes to swap the heads of world leaders with Picassos or Basquiats, or simply excise them entirely, leaving a head-shaped void. A man with a coyote’s head rides in the back of a car, rather dejected. Warhol’s head is a favorite motif: twin Andys in sunglasses standing stoically in a tunnel; Warhol’s head grafted onto a state official striding a tarmac; a man slouched in a chair, one of the artist’s Brillo boxes fixed where his head should be.

Jarmusch is best known for writing and directing pleasingly downbeat films like “Night on Earth” and “Down by Law,” in which laconic protagonists meander through the weirder corners of the world, encountering fellow travelers, or simply the uncanny. For the past 20 years he’s also been quietly producing collages like these, notecard-size pieces of delicately layered newsprint on cardstock that echo a similar worldview, scrambling imagery to create alternatingly deadpan and revelatory compositions.

“I never intended to do anything with these,” Jarmusch, whose thatch of chalk white hair and blackout shades are still a familiar presence on the downtown scene, said in an interview this summer. “But I thought, well, why not share them? See if they amuse anyone.”

Jarmusch says he was content to keep this practice to himself, creating upward of 500 collages, most of which haven’t been publicly seen. But over the last year, while at the Catskills home he shares with his wife, the filmmaker Sara Driver, he was convinced, with the encouragement of Arielle de Saint Phalle, with whom he has worked for nearly 10 years, to organize and present this strain of his practice. The result is Jarmusch’s first monograph, “Some Collages,” published this month by Anthology Editions, which collects more recent examples made in the last seven years. “Newsprint Collages,” a solo show of the original collages, his formal gallery debut, opens at James Fuentes on Wednesday.

And they are in fact highly amusing, in an spookily absurdist manner. They recall “La Boutique Obscure,” the impressionistic dream diary the Oulipo writer Georges Perec kept between 1968 and 1972, hallucinatory, slightly terrifying, but also frequently funny. Jarmusch’s collages are manipulations of something originally presented as fact — a détournement of photojournalism serrated and spliced into surrealist scenes that collapse time (a Victorian-era woman in a modern hospital room), or illustrate some psychic fantasy (releasing a primal scream while an audience applauds).

Jarmusch has no qualms vivisecting species like a paper-based Doctor Moreau (a man with the head of a Pomeranian led away in handcuffs). But one thing he doesn’t tamper with is scale. The collages dismantle the newsprint’s visual information but remain faithful to its original size, which means many of them are minuscule, some near-microscopically so. It also means the experience of looking at one is physically intimate. The images force you to crane your neck to decipher them, or bring the page closer to your face, as if receiving a secret. As objects go, “Some Collages” is stout, a macabre photo album. It’s small enough to be considered portable, which gives it a utilitarian cast, ready to be produced to divine something important or true about the day’s news. As Joseph Cornell wrote, “Collage = reality.”

“The interesting thing about them is they reveal to me that my process of creating things is very similar, whether I’m writing a script or shooting a film or making a piece of music or writing a poem or making a collage,” Jarmusch said. “I gather the elements from which I will make the thing first. Like, shooting a film is just gathering the material from which you will edit the film, you know? The collages reduce it to the most minimal form of that procedure.”

Still, collage presents an attractive convenience. Whereas a film shoot necessitates sophisticated and heavy equipment, not to mention the cooperation of many people, the collages require only solitude and a copy of the paper, a movable feast of broadsheet. “Mostly I do it in between the rigors of making a film, when I need to be left alone, or maybe people around me want me to leave them alone,” Jarmusch said. “I made a lot of these over the last few years before my mother died, in Cleveland. I would stay with her in her house, and go into another room and work on them. It’s stepping aside the real world, so to speak.”

Jarmusch keeps an old metal flat file in his garage with drawers dedicated to backgrounds, saved cardboard and “paper I’m attracted to,” newspapers he’s yet to parse. “I have files of heads,” he added. He has a strict set of self-imposed rules: newspapers only (no magazines), no sharp cutting tools (he favors ballpoint pens that have gone dry, which “can cut in a crude way”). The effect is a fiber halo, the tears and separations leaving a roughness that makes the images appear to fuzz, as if in a dream. “I’m not quite sure why I even adhere to these things. It’s like an oblique strategy,” he said, referring to Brian Eno and Peter Schmidt’s card-based method for inspiring creativity.

Jarmusch’s collages fit within a rich art history, which joins with the art world tradition of appropriation, as sacred as it is misunderstood, from Kurt Schwitters, who assembled delirious assemblages from trash, to Hannah Hoch’s and Man Ray’s Dadaist compositions, to Ad Reinhardt’s clattering, modernist “Newsprint Collage.”

“Max Ernst, Picasso and Braque, particularly, bringing other textures into their work, which carries through to one of my favorite artists of all time, Jasper Johns,” Jarmusch said. “I like that little kids can make them. You can make them so minimal. In some ways John Baldessari’s are even more minimal than mine because he didn’t even bother to replace faces but just put colored circles over them — some of those I think are very beautiful.”

He went on: “In some ways my favorite artists of the 20th century are, on a philosophical level, Duchamp for the first half and Warhol for the second half. I must say I still find it hilarious when people still don’t understand that because Richard Prince reappropriated a photograph, well, why wasn’t that photograph worth hundreds of thousands of dollars before that? How come he gets all that money?.”

Before he landed on filmmaking, Jarmusch intended to be a poet, studying under the New York School poet David Shapiro (who also made collages) and Kenneth Koch, and traces his animating principle to their strategies. “Koch once gave me a poem by Rilke, and said, bring me your translation in two days. I said, ‘But Kenneth, I don’t know any German.’ And he just looked at me with a kind of twinkle in his eye and said, ‘Exactly.’ And so the idea is take something, anything, and make a new thing out of it.”

Newsprint appeals to Jarmusch for its availability, but also its ephemerality. “I like it being so fragile,” he said. “You know, the old joke of yesterday’s newspaper you wrap the fish in or whatever, it’s something intended to be discarded. It reduces it’s own self-importance somehow.”

The thought occurs that this story could end up as part of one of Jarmusch’s collages, a neat closed loop. Does he find it ironic that he’s speaking with The New York Times about art he makes with copies of The New York Times? “It’s a little strange,” he said. “But I think it’s funny too. I love that newspaper thing. I love it in old movies where they roll the presses and all of that.”

These qualities also give the project an elegiac air. As local newspapers around the country cease operations or migrate to digital-only formats, Jarmusch’s collages become a document of a rapidly evaporating medium. “I realized only recently that, gee, I’m using materials that are almost obsolete now,” he said. “There’s something soothing for me in handling the paper, I don’t know how to explain it. Digital is too cold for me. I love it for many things, my last films have been shot with digital cameras and I’ve been editing on digital machines since 1996. I’m not a total Luddite.”

Jarmusch is interested in the pure visual collision of collage, but his source material inevitably troubles their innocence. Politicians creep in, along with images of global strife, which can be interpreted as commentary. “I try not to think too much about the kind of juxtapositions I’m creating,” Jarmusch said. “If they seem too pointed or too cute or something, I get rid of them. Sometimes someone says, ‘Oh, do you realize that’s the former right-wing prime minister of Australia?’ No, I don’t know who that was. Or other times I’ll just find a nice photo of Nico [the Velvet Underground singer]. I love Nico, I’m saving her head. And then I find something where I think, that would be nice for Nico. They’re kind of childlike, my way of putting them together. They’re playful.”

Yet he also admits, “Some of them are a little scary or dark. Some of them, I hope, are funny. The New York School poets taught me if there’s nothing funny in any of your stuff, then wow, how unfortunate for you.”