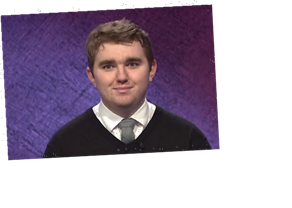 Brayden Smith, a five-time “Jeopardy!” winner hailed by fans as “Alex’s Last Great Champion” for his flurry of victories during some of the late host Alex Trebek’s final episodes presenting the show, has died at the age of 24.

Smith died on Feb. 5 in Las Vegas, his family announced in an obituary published in the Las Vegas Review-Journal on Friday. He’d been hospitalized for several days, reported the Review-Journal. The cause of death was not stated.

He “passed away unexpectedly,” she wrote, adding: “We are so grateful that Brayden was able to live out his dream on @jeopardy.”

The show described Smith as “kind, funny and absolutely brilliant.”

“Our deepest condolences go out to Brayden’s family,” the show added. “He will be missed.”

James Holzhauer, who dominated the game show in 2019, said he was “absolutely devastated by the tragic loss,” describing Smith as one the show’s “finest players and Las Vegas’s finest humans.”

Smith graduated from the University of Nevada last year with a degree in economics and was planning to “attend law school and become an attorney for the federal government,” said the obituary.

He earned more than $115,000 during his five wins on the show, reported the Las Vegas Journal-Review, and had been looking forward to competing in its Tournament of Champions.

Trebek, the longtime host of the show, died in November at age 80. His final episodes were filmed in October as he received treatment for pancreatic cancer.