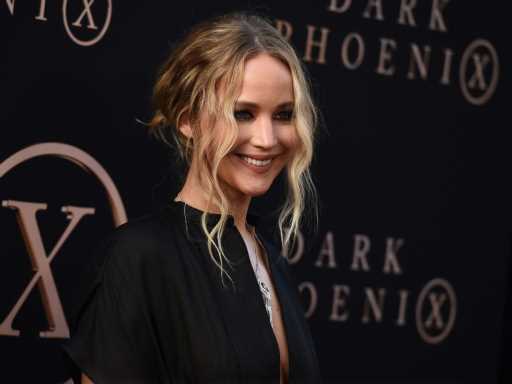 Jennifer Lawrence has been out of the public eye for three years, but she’s been busy enjoying her personal life and trying to find a sense of normalcy in her movie star world. After marrying art gallery director Cooke Maroney in 2019, she is now expecting a baby with him in 2022. While she’s been focusing on her happily ever after, Lawrence still has a quirky side to her.

The Red Sparrow star revealed three gifts that Maroney gave her that she cherishes to Vanity Fair: her wedding band, a pearl necklace and a diamond necklace with a curious gift presentation. According to Lawrence, the diamond present was placed in a hardcover copy of the movie, Hereditary, the creepy horror film about a family that learns terrifying secrets about their history after their grandmother dies. To add an even more sinister spin to the gift, the necklace was placed “atop the glossy image of a character’s decapitated head on the side of the road, swarming with ants.” She described the thoughtful (um, offbeat) gift as “so sweet.” OK, J.Law, whatever floats your boat.

Despite being an Oscar winner, Lawrence leads a pretty subdued life with Maroney. She recently called herself “a complete homebody and the laziest person who’s ever lived” on Dear Media’s Absolutely Not podcast. “Like Cooke’s biggest joke with me, he’s like, ‘Oh, you want to go directly back to the apartment, babe?’ Or like, ‘Oh no, you have to stay in bed again today,” she laughed.

So while we don’t necessarily get the horror gift wrapping for a diamond necklace, the only thing that matters is that Lawrence has found her person. He’s obviously tuned into her quirks and that makes her heart melt.

Before you go, click here to see all the celebrities who have pulled off secret weddings.</strong