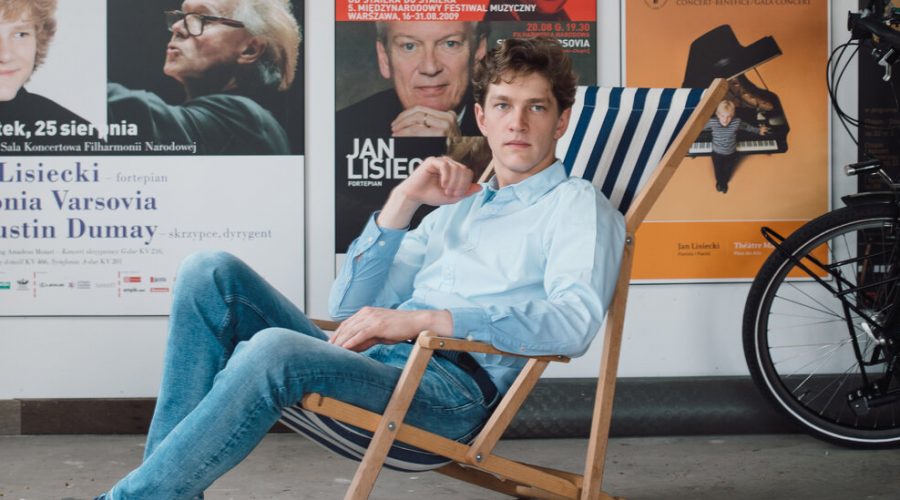 The Canadian pianist Jan Lisiecki started out as something of the Doogie Howser of classical music. He was signed by the august record label Deutsche Grammophon when he was just 15, and at 18 was named an unusually young Young Artist of the Year by Gramophone magazine.

But Lisiecki’s technique was mature even then, and he won respect from critics and fellow musicians for his clarity and precision.

“I appreciate a clean sound,” Lisiecki (pronounced lee-SHETS-kee), now 26 and still living with his Polish-born parents in Calgary, said in a recent interview. “Not too bombastic, not too virtuosic, not too audacious.”

Lisiecki is poised and fairly inscrutable during concerts, his eyes often closed. In an interview, Annik LaFarge, the author of “Chasing Chopin,” said she regards his “unhistrionic” style as “extremely Chopinesque.”

Chopin, as it happens, is a focus of his young discography. On Friday, Lisiecki released his new recording of that composer’s complete nocturnes, which he set down last October in Berlin for Deutsche Grammophon.

Chopin’s 21 nocturnes, written over the course of nearly his whole composing life, are single-movement pieces of generally less than six minutes. Their allusion to the night refers not to gloom but to evening intimacies, the pianist and scholar Kenneth Hamilton said in an interview.

Suggestive of music played for close friends, or even for a lover, the nocturnes get an even more intimate, meditative reinvention from Lisiecki, who said he regards them as pieces ideally to be played alone. His starkly slow tempos — with the works running, in some cases, a minute or longer than usual — give these nocturnes a Satie-like inwardness.

Lisiecki spoke about the recording and his approach to music on a video call from his home in Calgary. These are edited excerpts from the conversation.

How did you prepare for this new album of the nocturnes?

I had dreamed of recording them for quite a while, but I knew that to do it well I would have to play them in concert first, to get the right emotion. They’re not technically difficult — you can approach them from an early age — but it is very difficult to make them sound good. I have been scheduling many of them in my recitals to get that experience of communicating them. The nocturnes make me feel like I’m at home at night and I have an emotion I want to express; they’re pieces I play for myself. To play them in front of people — to break that private bubble — has been the challenge.

In recordings, the complete nocturnes are usually presented in chronological order. Why did you stick with that precedent?

I’m very traditional. I’m the type of person who likes sending out postcards written in fountain pen, who uses a landline phone with a rotary dial. I am also traditional in how I listen to and present music. After I recorded the nocturnes, I did think about the order. They were not written to be played together — they are very individual pieces — but the slight adjustments I could have made to improve the flow of the recording were not worth compromising the tradition.

Why did you choose to record in the Meistersaal, an early-20th-century Berlin concert hall?

We chose it because it was very practical during Covid. We could have it to ourselves; there was nobody in the office; there were no distractions. And it isn’t too cavernous, so I didn’t have the feeling I was playing for an empty hall. Also, there is natural light, which I really appreciate. And we could easily adjust the electric lights if I wanted a different ambience. In the end, it was just a very inspirational space.

What kind of piano did you use?

I didn’t get to select my piano, but I was lucky enough to be able to choose Daniel Brech, who lives in western Germany, as my piano technician. I have worked with him several times, and he and I have the same vision for how a piano should sound. We bonded when we first met in 2013, when I replaced Martha Argerich in an Orchestra Mozart concert with the late Claudio Abbado. For a solo piano recording, it’s very important what instrument you’re playing on — if it is not correct, there is very little you can do. He brought his own piano, a Steinway D, and I trusted him.

Why do you play the nocturnes faster in concert than on your new recording?

To keep an audience invested in a performance, that sort of slow tempo would be nearly impossible in a concert hall, where there are external factors, like hums or slight noises. Any small disturbance will break the spell, but in the studio I could keep that spell for much longer.

Chopin’s early nocturne, Op. 9, No. 2, is one the best known pieces of classical music, regularly used in film soundtracks. How did you approach it?

I pay careful attention to the left hand. The right hand — the melodic line — is what draws most of us to Chopin. But what makes that melody work or shine is the waltz-like left hand, which often suffers. If you forget about the structure, then you lose the logic of the piece, and then you lose the beauty.

Why do you like to close your eyes when you’re playing in concert?

After so many hours spent on the piano, I pretty much know where all the keys are. When you shut down one of your senses, you heighten the others. Generally there are no smells onstage, so I heighten my hearing and completely immerse myself in the music. In a concerto with an orchestra, I have to communicate visually, not only with the conductor, but also individually with the musicians. I know when I have to look, and I am very respectful — except for a few rare cases where I have not enjoyed working with a conductor and I played with my eyes closed the whole time.

Some of your fellow young pianists have used their fame to speak out on political issues. You seem to avoid that.

I am a pianist, and I have a lot of knowledge about the piano. I am interested in other matters, but that is not my profession. There are things that collide with my own personal views, but it doesn’t go as far as saying I won’t play with a certain conductor or won’t play in a certain country. Or I might make those choices, but on a quiet level, without making a statement about it.

We are divided on every point these days, and all sorts of matters are very politicized. Vaccine, no vaccine; political left, political right; refugees, no refugees. A concert should welcome everybody and be a unifying force. We’re playing music, which doesn’t have a political standpoint. Of course, certain composers did, but the music itself does not. It’s apolitical — it’s just music, and it’s beautiful, and I hope it can remain that way.

You and the gymnast Simone Biles are roughly the same age, and you have both been in the public eye since your early teens. Did her recent struggles at the Tokyo Olympics strike a chord with you?

I did identify with her, especially with her so-called “twisties.” Playing the piano onstage is not nearly as high-risk; I can’t injure myself. But there certainly are days when I’ve done everything I can — when I have slept decently, and am completely prepared — and then I go out onstage, and I feel like there is a blank page in front of me, like I don’t know what I’m doing. I can’t put it down to being nervous. It’s just one of those days when I’m not in my element — I’m just not. As a musician, I can get past it. I have practiced enough, and I can rely on my instincts. But I can understand where she is coming from.