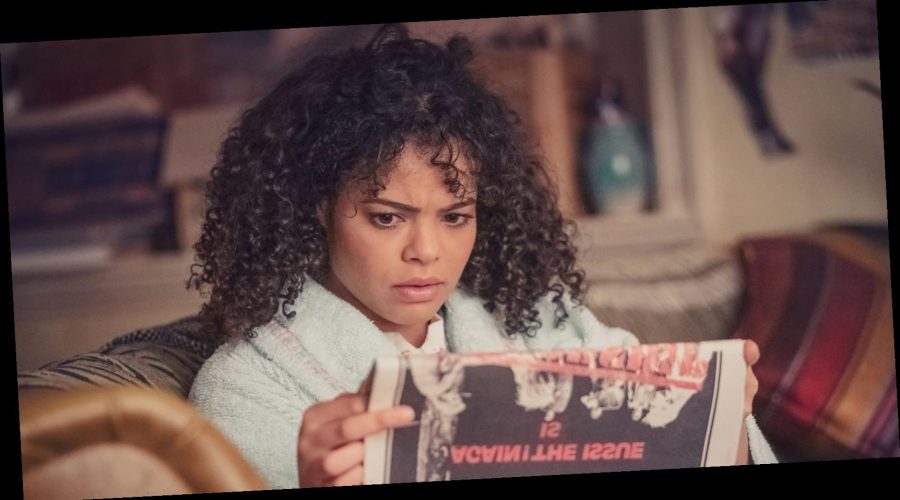 It’s A Sin creator Russell T Davies talks about the uncomfortable truth behind one of the key scenes in episode two of the hit series.

It’s official: Russell T Davies’s new drama, It’s A Sin, has been a hit in lockdown. Telling the story of a group of gay friends living in London during the Aids crisis in the 80s, the show is heartbreaking and hilarious in equal measures (with an absolutely banging soundtrack).

The first episode, which aired on Channel 4 last Friday (22 January), was watched by 1.9 million viewers, making it the broadcaster’s top-rated drama launch since last year’s Deadwater Fell. It was also the channel’s best-performing drama among people aged 16-34 in three years. People at home couldn’t stop talking or tweeting about it. And critics called it a piece of “landmark television you’ll never forget”.

So it’s likely that you’ve already binged the whole series on All 4 or you’re continuing to watch it on Friday nights.

It’s A Sin: the 80s soundtrack that will take you back to those big nights out

One uncomfortable truth you might have noticed is the strong parallels between the Aids crisis and the coronavirus pandemic.

Olly Alexander, who plays the lead role of Ritchie in the series, recently addressed this in an interview, saying: “We finished filming a year ago and then when the pandemic started happening, people were saying things and there were all these crazy rumours about where it [Covid-19] came from, where it was ‘made’.

He added: “My character was saying the same lines, and you know, this is a period show about the 80s! It blew my mind… It’s so interesting how history repeats itself like that, and how misinformation is so prevalent and is really a problem.”

Davies, who created the show, has just expanded on this in a new podcast episode, and he refers to a scene in episode two which reflects the fear people experience in times of misinformation and uncertainty.

“A lot of the opening of the series, the first two episodes, are very much about Aids denial in 83 and 84, when it’s starting to rear its head,” Davies tells Chris Sweeney on the Homo Sapiens podcast. “The law [the Sexual Offences Act] changed in 1967, 15 years have passed and it’s a new generation – we should be coming out now. But along comes this disease that ‘specifically targets gay men’.

He adds: “You and I know that it doesn’t specifically target gay men, but nonetheless that’s what it felt like and that’s how it was seen.”

It’s A Sin: Olly Alexander explains why the new Channel 4 drama is such a timely watch

Exploring the stigma that was attached to Aids and the LGBTQ+ community at the time, Davies says it’s easy to make enemies out of the people who were scared to touch people with Aids, because that fear was usually “bound up with homophobia and disgust of the person”.

However, Davies explains that the fear around misinformation and uncertainty we are experiencing in the current pandemic could help us “find some forgiveness” for people who didn’t know the right way to react back then.

He illustrates this with a scene from the second episode, saying: “There’s a moment in It’s A Sin where we get someone to drink out of the same mug as someone who is HIV positive. But actually, it’s one of our heroes, it’s one of our lead characters [Jill]. It would be very easy to write that scene with an evil, homophobic person saying ‘I refuse to drink from this mug’, but I’ve switched it around.”

He adds: “She’s a lovely lead character, a friend to all the gay men, she helps those with Aids. And she’s the character who goes through the ‘terror’ of drinking from the same mug. So much so that she gets up at midnight and finds the mug – which she’s washed and dried and hidden – and gets it out and smashes it to pieces and puts it in the bin, so that no one will ever drink from it.

“And that’s a ‘good’ person going through that, that’s why I did that. It wasn’t completely mad to be scared of a virus at that time.”

This uncomfortable but important explanation of the scene proves why it will have got quite a lot of viewers at home thinking. You can learn more and carry on the conversation by listening to the full fascinating interview with Davies on the Homo Sapiens podcast.

You can watch It’s A Sin at 9pm on Channel 4 on Fridays or catch the whole series on All 4.