Imagine your most shameful fears about yourself. Now imagine sharing them with a writers room and then the world, packaged as a relationship comedy.

That’s what Desiree Akhavan did with her debut TV show “The Bisexual,” which comes to Hulu on Friday. Akhavan plays Leila, an Iranian-American woman living in London who has been with her girlfriend and business partner Sadie (Maxine Peake) for 10 years. When Sadie proposes, Leila balks and moves out, finding herself with a new flatmate, Gabe (Brian Gleeson), and a desire to date men for the first time.

The series is a different kind of coming-out story, one that digs deep into the expectations surrounding female sexuality and the discomfort that can greet bisexuality from both gay and straight people. Akhavan, who co-wrote, directed and stars in the series, began working on it after doing press for “Appropriate Behavior,” her debut feature film, in 2014.

“I heard myself described as ‘the bisexual’ at every other introduction: ‘the bisexual filmmaker,’ ‘the bisexual Iranian-American,’ ‘the bisexual Lena Dunham,’” she explained. “For some reason, hearing that word made my stomach flip, in a non-fun way. And I wanted to explore that.”

A coproduction of Britain’s Channel 4 and Hulu, the show’s rawness will come as no surprise to viewers who know Akhavan’s work from “Appropriate Behavior,” her role on the fourth season of HBO’s “Girls” or “The Miseducation of Cameron Post,” the acclaimed film about a gay conversion camp that Akhavan directed and co-wrote, which was released in August.

During a recent trip to New York, the London-based Akhavan discussed why she knows the title will alienate some people, the importance of realistic sex scenes and what she hopes the #MeToo movement will achieve. These are edited excerpts from the conversation.

How did you come to write a show about a New Yorker living in London?

I wrote the pilot when I was still living in New York. I pitched it to all the networks and it was rejected everywhere. Then I ended up moving to London and I pitched it on a whim to a couple of places in the UK and they all said yes. It turned out to be this backward way of getting an American distributor on board.

The show wrestles with charged dynamics found within the queer community. What was the experience of writing it?

Cathartic. Sometimes painful. I think it was about naming the worst fears about myself, in some moments, and in other moments the worst and the best of the people around me. There’s stuff that I was really ashamed of when we were first talking about the show that I feel less shame about now.

Like I remember thinking well, what if I had fallen in love with a man? If I were hot in high school, if a man had seduced me, I never would have come out. I wouldn’t have allowed myself to fall in love with a woman, because it was such a horror to my family. Not feeling gay enough, that’s something I felt a lot of guilt over. I don’t think that’s true anymore, but that was something I needed to say in the script.

The show is composed of true stories from my and my collaborators’ lives. They’re heartfelt and very much mined for heightened dramatic purposes, but also with a real air of authenticity and the stuff that we’re uncomfortable to say out loud.

Was that part of the thinking behind the title?

I think it will turn off a lot of viewers. I want to know why that is, and to stand by it: I know that I’m playing the long game and I want you to watch this thing and be like “Oh, it’s not what I thought it would be.”

[Read our review of “The Miseducation of Cameron Post.”] 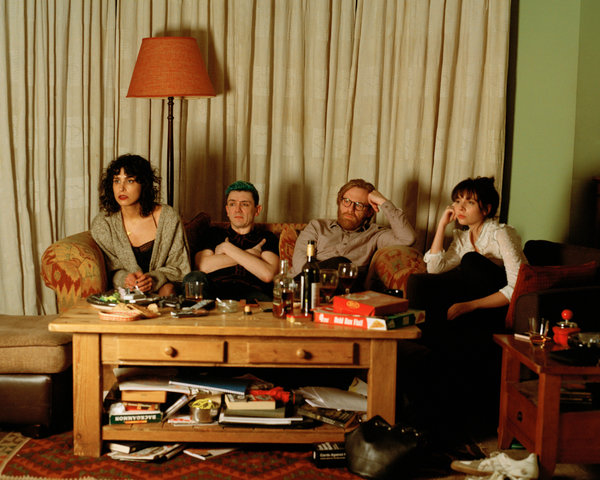 There’s a lot of generational tension in the show, as when Leila says to Gabe’s younger girlfriend that “everyone under 25 thinks they’re queer.”

They’re not necessarily our opinions, we just want to bring these conversations to the surface. There is a different dynamic between having grown up with the internet and being queer being like being part of a cool club, and not growing up with the internet and having to fight for being openly gay. I’m not looking down on the younger experience of being queer, but I do think that there’s a resentment there that we gloss over.

It feels like Gabe is grappling with toxic masculinity right up to the end of the show.

That’s 100 percent what was happening. My hope for the show is that people stick with the six episodes, because I think he may come off as a stereotype at first and then the more you get to know him, you peel down the layers. He is really a love letter to my brother, who is my favorite person in the world, and on paper he’s my worst nemesis. He’s so disgusted by armpit hair on a woman, and I grew out my armpit hair to play Leila — he was horrified. We really got into it on that one.

In such a queer show? Yeah. I wanted that juxtaposition, because I still coexist with my brother and we are nothing alike. But we laugh the same.

I loved when Gabe randomly asks a table of lesbians what they thought of the notoriously explicit lesbian film “Blue Is the Warmest Color,” which is very male gaze-y and also had abusive conditions on-set, according to the stars. Straight people have asked me about that movie too, as apparently the only queer art they know. How important is it to have art about queer women made by women?

I think unrealistic depictions of sex and relationships are harmful. I was raised on them and the first time I had sex, I had learned everything from film and television and I was like “Oh, this isn’t at all like I saw on the screen.” The more I have frank conversations about sex, the more I learn that all of us feel like something is wrong with us sexually. I’m so fascinated by this because it plagues me.

We punish the women in stories who have a sexual appetite, and I think there’s a lot of fear around female pleasure. Because most people equate it with power, and there’s a lot of discomfort with female power. I don’t think this is the story of a slut — this is a woman who’s trying to allow herself to receive pleasure, and not lie and compromise about what that entails.

When you’re creating work that is so raw and personal, how does it feel to get feedback and reviews?

It’s really hard. This show is so frank and so unlike anything else out there, so I feel pretty naked. I recently learned to do something which makes it easier: When someone tweets something very mean or that feels like a real personal attack, if you look at what else they’ve written or championed, it will always be something you hate. Then you can calm down. You’re like “Fine, I don’t want your love.”

What else are you working on?

I’m developing stuff, but I would really like a big job from a huge studio.

A Disney or Marvel movie. Winning an award at Sundance for “Appropriate Behavior” did nothing for my life, except it really gave me a sense of entitlement. I think most women don’t have that innate sense of entitlement that most men are born with, especially when they work in male-dominated industries. I’m really grateful for that: My own feeling of “I deserve the world.”

Has your thinking about projects or how you run sets changed since the #MeToo movement?

No, because I have always run a super female-heavy, super female-focused and really warm environment for makers. I know what it’s like to feel uncomfortable on set and not just in sexual ways — in the hierarchy of power that any industry with a lot of money and visibility will promote. That is something that will change along with the #MeToo movement. As large as sexual harassment is, this is larger than that — it’s about treating people with respect and dignity.

11/14/2018 Entertainment Comments Off on In ‘The Bisexual,’ Desiree Akhavan Grapples With All Kinds of Sexuality
Recent Posts