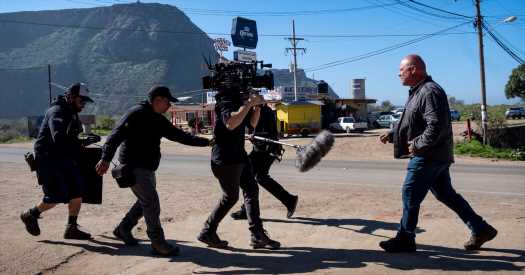 LA MISIÓN, Mexico — About an hour’s drive south of Tijuana, amid the palm trees, fishing villages and ribbonlike cliffs of Baja California’s Pacific Coast, it was easy sometimes to forget about that other ribbonlike thing of weathered steel to the north. The thing that obsessed so many people from my home side of the border. The thing that so many people have died trying to cross from this one.

The actor Michael Chiklis squinted into the sun and dragged a foot through the dust as he limped across the set of the new CBS All Access series “Coyote.” His character, an ex-border patrol agent named Ben Clemens, couldn’t forget because the wall had been his life. Only now Ben found himself in a very different circumstance, one he had seen many times but never experienced: wounded and thirsty, head bleeding, alone in a foreign land, constantly afraid that his next step could be his last.

“You know the old expression ‘walk a mile in the other man’s shoes’?” Chiklis asked during a break for lunch. “What if you had to walk 100 miles in another man’s shoes? Then you really get to know what that perspective is like.”

That was last January, less than two months before the coronavirus put a premature end to production. Plenty has changed since then, including the number of episodes in the first season (down to six from 10), the network (to CBS All Access from Paramount), and potentially the viewing public’s taste for redemptive cop tales.

The question when Season 1 of “Coyote” arrives in full on Thursday, then, is: Will viewers want to walk those 100 miles with Ben? Chiklis hopes so. 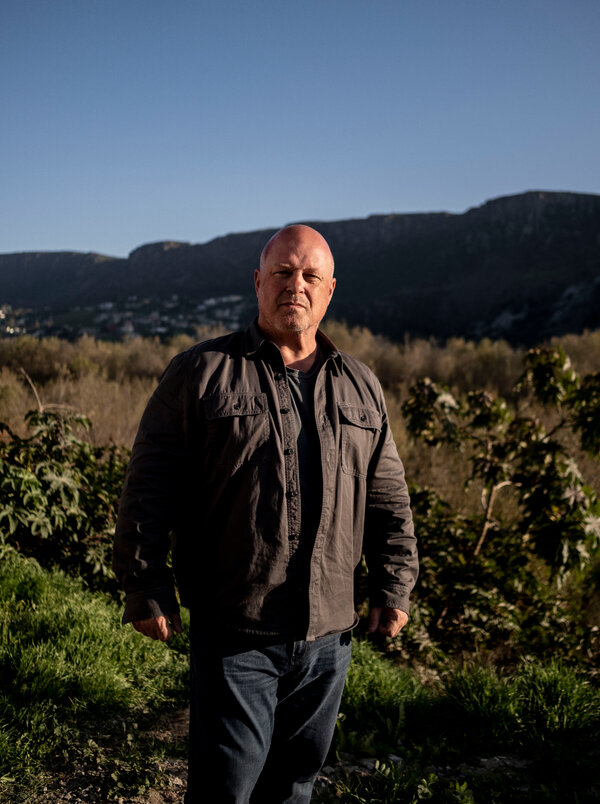 For starters, there was one thing he wanted to make clear, referring to his character in “The Shield” — an antihero dirty cop for which he won an Emmy and is probably still best known:

“This guy is very different than Vic Mackey.”

He certainly suffers more for his sins. Ben’s reckoning begins as he is pushed into mandatory retirement from U.S. Customs and Border Protection in California because of his age. We soon learn that a deadly mistake a decade earlier, one with particular resonance in the wake of last summer’s racial justice protests, has caused his personal life to disintegrate, if not all of his prejudices.

When asked by the struggling widow of his dead Mexican-American partner to help her settle some affairs in Mexico, Ben agrees and heads south. Almost immediately, he is ensnared in a deadly predicament with a local drug cartel that effectively forces him to become one of the human-smugglers he used to hunt — a “coyote” — to save a young and pregnant Salvadoran woman’s life.

And that’s just the beginning of a journey that grows more hellish with every episode.

Back in Tijuana last January, David Graziano, the “Coyote” showrunner and one of its three creators, sat in a hotel bar with another creator, Michael Carnes, as the two described what they hoped the series could do at a time when anti-immigrant rhetoric and talk of wall building had been so deafening in American politics. (Josh Gilbert, who wasn’t there, was the third creator.)

“The initial conceit was that the show would be something of a conversation between Mexico and America,” Graziano said. The writers and producers wanted “to see how these two countries that have a lot to say to each other and share a national wound, the border fence and everything, can talk to each other dramatically.”

A shared wound. Reminders never took long to surface. As our entourage drove through Tijuana the next morning, we caught sight of the border wall’s westernmost point where it runs headlong into the ocean — a vision that would merely be absurd if it weren’t so freighted with suffering, sinking beneath the waves like the many migrants who have drowned trying to swim around it. Visible from the highway a few miles east, the wall snaked its way along an enormous earthen berm built in the late 2000s to seal Smuggler’s Gulch, a steep-walled canyon known for reasons made obvious by the name.

Such urban border-security efforts have driven more migrants to remote, forbidding regions like the Sonoran Desert, where much of Episode 2 was filmed. Almost half of the hundreds of bodies found each year along the U.S.-Mexico border are discovered in that desert, according to Border Patrol. The actual death totals are likely higher.

For Chiklis’s character, decades on patrol and a decidedly jingoistic attitude have clearly eclipsed his ability to see the full humanity of the migrants he arrests, or truly empathize with their suffering. When a new reality knocks him down, he has that much further to fall.

“He’s a Budweiser-drinking, pickup-truck-driving guy, probably has a MAGA hat somewhere in the back of his closet,” Graziano said. “He’s probably never been outside the country, but yet he’s policing the border of the country.”

He added: “I wanted him to be the biggest stereotype in the show so people would have the fun of watching him just strip back to his humanity.”

But of critical importance to the show’s creators was mitigating the extent to which these issues were focused through a white American lens. Yes, Chiklis is the star, and producers hope his popularity provides an entry point for Americans who might not tune in otherwise. But it was crucial, they said, to avoid the “white savior” cliché. Whatever heroism Ben displays in rescuing that young woman (Emy Mena), she also saves his life. Ben, meanwhile, makes one desperate moral compromise after another, as the body count soars.

As important was creating authenticity, in part by spending much of the show’s time (about 40 percent, the creators estimated, before the season was cut short) on Mexican and Central American characters, and resources on capturing the location and culture.

“What we wanted to do was write a story that appealed to a very diverse audience,” said Michelle MacLaren (“Breaking Bad,” “Game of Thrones”), an executive producer of the series who brought in Chiklis and Graziano and helped develop it with them, along with Carnes and Gilbert. (She also directed the first two episodes.) And by “diverse,” that included people “deep in Texas” and people “deep south of the border.”

“We wanted to accurately represent all parts of this story,” she said. “It’s why we surrounded ourselves with Latin writers, Latin producers, Latin crew, Latin actors.”

Much of “Coyote,” which is produced by Sony Pictures Television, is dedicated to developing the stories of the people of Porto Libre, a fictional fishing village that is under the thumb of a cartel run by Juan Diego Zamora (Juan Pablo Raba) and terrorized by his hotheaded nephew Dante (Kristyan Ferrer). The return of another headstrong Zamora adds a “Godfather”-like struggle for control of the family business.

Silvia, a local taqueria owner played by Adriana Paz, is among the many peaceable locals caught in the Zamoras’ web. Paz, who is Mexican, said that she was proud to play the role because she wanted to work on projects that made people think and feel and question their beliefs.

“I think the message will be, for me, that we are all human beings — we all have necessities and we all have worries,” Paz said. “I like to believe that we can share this world and we can try to find ways to solve the problems with no violence.”

The events of 2020 made telling this story more complicated nonetheless. Coronavirus troubles aside, the police killing of George Floyd and a summer marked by national soul-searching had prompted hard questions about characters like Chiklis’s on “The Shield,” who don’t play by the rules. However different Ben is from Vic, some viewers, given the gravity of Ben’s transgressions, will likely not grant him a path to redemption — a path that many of his prisoners and casualties over the decades weren’t allowed.

Chiklis has taken such concerns to heart. They spurred him to change his previous policy of keeping silent about the way some viewers openly admired the corrupt Vic Mackey. (“It’s heartbreaking,” he said in a recent follow-up conversation, “because that seems to me that you’ve really missed what we were doing.”) But Ben, he noted, actually tries to play by the rules. He feels remorse. To Chiklis, that makes all the difference.

“This guy is a good man who has made horrible mistakes, horrible split-second decisions — who wants desperately to redeem himself, to do the right thing,” he said. “Hopefully, through that journey, he’ll find some redemption, but it’s not really about him. It’s about this broader, greater situation than him.”

Still this story, like the borderlands that inspired it, was always complicated. Back in La Misión, one of three towns filmed to create the fictional Porto Libre, life seemed paradisiacal. The morning smelled of sage. The sun cast long, cool shadows as it broke above a purple ridge to the east. Schoolgirls in colorful backpacks and farmers in dusty pickups hurried through the set between takes. Crew members fed treats to the local dogs.

To a beguiled outsider, many of the region’s complexities were hidden. Only from a talk with producers did I learn, for example, that much of the filming in Baja had required permission from the local cartel. Some forms of authenticity were less desirable than others. (“One of our biggest line items is security and just making sure that the people we’re working with are safe,” Graziano said. “We have not had any problems.”)

Of course, complex or not, “Coyote” has to be entertaining, and to that end it incorporates elements of the western, the mob movie and the police procedural. It helped to have Chiklis, who is preceded by his tough-guy persona: Even if he wasn’t already known for skull-cracking roles, his physical presence would demand it.

In person, Chiklis certainly exudes strength, but he is warm, humanistic, passionate, cursing himself when he drops a line, high-fiving the crew when they nail a difficult take. The night we met in Mexico, it was a particularly emotional time. He had just flown in from attending his father’s funeral in Lowell, Mass., that same day.

It was late, he was exhausted, and he briefly waxed philosophical then went to bed. The next morning, he was up at 4 a.m. and on set before sunrise.

He talked at lunch that next day about the challenges of his new character, and how he hadn’t been this excited in years. The conversation drifted back to his father, whose wisdom spoke directly to our discussion about borders, identity and the insidiousness of fear.

“He would say, ‘We’re born, we live and we die — you have to accept that,’” Chiklis said. If you could accept it and not be ruled by fear, he went on, then you wouldn’t overreact when faced with someone who thinks differently.

01/06/2021 Entertainment Comments Off on In ‘Coyote,’ Breaking the Cop, Not the Rules
Recent Posts
We and our partners use cookies on this site to improve our service, perform analytics, personalize advertising, measure advertising performance, and remember website preferences.Ok