BELGRADE, Serbia — When Mahnaz Alizadeh married her husband in Iran, she never expected to find herself in a refugee camp in Serbia, trying to support herself and three children.

Ms. Alizadeh, now 27, was born to Afghan parents who fled to Iran from their war-torn country. They settled in a rented home and sustained their family of eight by farming. Every year, they needed to pay a high price to maintain their temporary status in the country.

To help her family, Ms. Alizadeh began farming at a young age and finished only four years of elementary school. 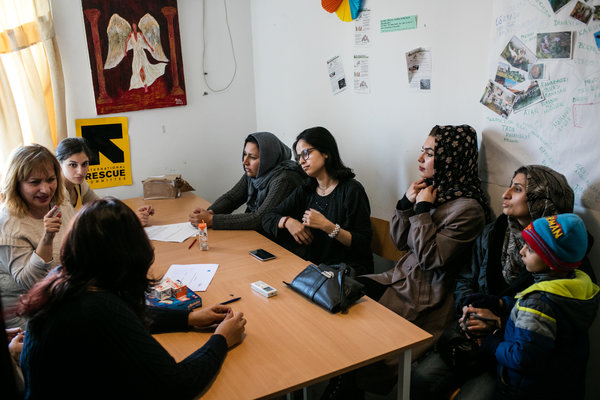 When she married, Ms. Alizadeh expected that her husband would be competing internationally as a boxer. But his dreams dissolved, and he was deported to Afghanistan.

Left alone, with no money to feed her two children, Ms. Alizadeh decided to leave Iran. Her husband returned from Afghanistan illegally, and together, they started their journey toward Europe in 2016.

With only basic clothing, some food and a couple of blankets, they walked 12 hours through mountains to cross into Turkey.

“I couldn’t walk anymore. I was scared for my children. I fell on my knees and thought that was the end,” Ms. Alizadeh said through an interpreter in an interview last month.

Smugglers on horses helped them finish their ascent. The descent, she said, was even more difficult. “There was water, snow and mud, and we had to slide sitting down. We crossed a river and were totally wet, frozen, hungry and exhausted,” she continued in Farsi.

At one point, they were stuck in the snow and cold with their children, then 4 and 9, for seven hours.

“My 4-year-old child cried for hours and suddenly stopped crying. I was scared he had frozen. Thank God he was just exhausted and fell asleep,” Ms. Alizadeh said.

Crossing the rough sea, hidden under the deck of a boat, was another obstacle in the next leg of their trip, to Greece. While they waited for the boat to leave, they heard the cries of women and children who had also endured terrible journeys. Waves splashed over the edges of the boat. Wet, with very little hope, they were on their way to Greece.

Ms. Alizadeh’s family next crossed into Macedonia and Serbia, where more than a million refugees have passed through or settled since 2015. As European countries made it harder for refugees to follow the so-called Balkan route, her family was among 4,000 or so refugees stuck in the country.

They eventually settled in the Krnjaca refugee camp near the Serbian capital, Belgrade, where the International Rescue Committee works with people affected by conflict or natural disasters, offering support for them to regain control over their lives.

The agency is one of the eight organizations supported by The New York Times Neediest Cases Fund. Among the services the group provides are sexual and reproductive health in 20 counties worldwide.

In Serbia, the committee worked this year with the Serbian Association for Sexual and Reproductive Health and Rights. This local partner, founded in 2002, is part of the International Planned Parenthood Federation, a leader in reproductive health and services.

Ms. Alizadeh is among some 800 women and girls who received advice or counseling from the partnership between the International Rescue Committee and the Serbian Association, which lasted Feb. 1 to Nov. 30. About 200 women received medical assistance, and 6,000 were helped with contraceptive measures. Moving forward, these services are supported by other partners; the International Rescue Committee said it would continue to monitor the situation and when needed advocate for the sexual reproductive health and rights of refugees.

In the partnership, a monthly workshop was held in the camps to increases awareness of sexual and reproductive health. It is a service that Ms. Alizadeh came to value.

Also among participants was Rukhsar Masudi, an 18-year-old from Iran, who had never been to school but taught herself to read and write. She attended and actively participated in the workshops.

“I have learned a lot from these workshops. Despite the cultural sensitiveness of the subject for us, I think I have made great progress,” she said through an interpreter in Farsi. “Nevertheless, each time I come here, I have more questions to ask.”

Ms. Alizadeh gave birth to a boy in Serbia. The child, Dino, has hearing problems.

“Dino is not a typical name for our culture, but I named him after the manager of the camp, who is a man with a big heart and who helped me and my family,” Ms. Alizadeh said.

Her wish for the future is to find a secure place for her family, to provide education for her children and medical aid for Dino.

Donations to the Neediest Cases may be made online, or with a check or over the phone.

12/18/2018 Entertainment Comments Off on In a Serbian Refugee Camp, Women Tackling a Taboo Topic
Recent Posts