The room my brother and I shared when we first moved to the United States was small and dark, with an off-putting smell that emanated from a noisy air-conditioner. It wasn’t ideal, but we’d lived in small spaces before. Atlanta was something else — hot and humid, coursing with wide highways that neither one of us was old enough to drive along. That summer, bored and unsupervised, we’d sit on the curb in the parking lot for as long as we could take the heat, wanting school to start, and dreading it. Making fun of the whingy American accents, and wanting our own.

My parents were busy. Outings were luxuries. One Saturday, while my mother browsed the sales racks at the mall, my brother and I stared at sneakers we couldn’t buy and listened to snippets of new albums we couldn’t buy and rode the escalator up, following the scent of sugar and yeast. I’d never been to a mall food court — a wonderland where free slivers of chicken on toothpicks were held out to us like offerings, each bite seasoned to its outermost limit, fried and tender and salty and glistening with sweet, cornstarch-bound sauces. I saw cookies — the biggest cookies I’d ever seen in my life — cookies the size of pizzas. Pizzas the size of tables. Tables the size of cars, all of them full of people with sweaty paper cups the size of planters.

I was already drunk on a sense of abundance by the time we sat down for lunch with my mother at the California Pizza Kitchen, choosing it because it seemed fancy and my father was leaving work in the middle of the day to meet us. We studied the menu giddily, and when we were encouraged to each order our own pizza, we all had our own reasons to go for it. That’s when I felt the first pull of something like love for America, not the one I’d seen on TV, not the one I’d come to expect from the dubbed episodes of “Fresh Prince” and “90210” that we watched in rural France, but the one that stretched out before me now, greasy and messy and garnished with fresh cilantro. 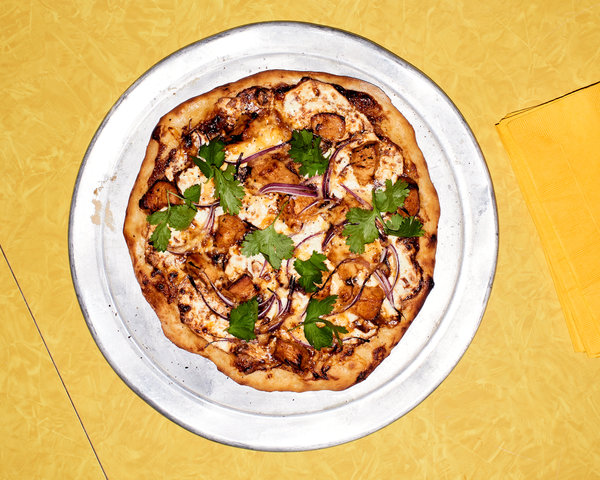 The barbecue chicken pizza seemed as if it were built in a lab to suit my simple, sweet-leaning preteen tastes. In a way, it was. Two former federal prosecutors opened the first location of California Pizza Kitchen in Beverly Hills in 1985 and hired a chef to consult on their opening menu — and not just any chef! They hired Ed LaDou, unsung American pizza hero. LaDou already had a reputation as a kind of genius when it came to toppings, a rule bender. He was the brains behind Wolfgang Puck’s famous smoked-salmon pizza, the one you can still order at Spago, in Los Angeles, topped with crème fraîche and chives and tiny dollops of caviar.

For California Pizza Kitchen, LaDou dutifully designed another hit: a tangy, thin-crusted beauty of a pie smeared with barbecue sauce and dotted with small pieces of chicken breast, thinly sliced red onion, mozzarella and smoked Gouda. When it came out of the oven, there was a flutter of cilantro. It was too easy for purists to make fun of it — you call this pizza? — but it was also immediately and immensely popular. “LaDou was an instrumental figure in a distinctly Californian phenomenon,” wrote Jocelyn Y. Stewart in LaDou’s Los Angeles Times obituary. His pizzas would be his legacy.

Later, my brother and I would learn that we weren’t supposed to like mall food. Certainly not mall pizza. But when we still had identification cards with the word “alien” on them, we found that mall pizza helped us feel at home, assured us there was space for us here. We ate them all summer, and I still make an ode to them now and then. A dough from scratch and a not-too-sweet barbecue sauce, which comes together in a few minutes on the stovetop, don’t just recreate the flavors of the chain’s pizza; with respect to LaDou, they greatly improve on them. Ketchup, vinegar and sugar are all you really need for barbecue sauce, but I’d like to think that LaDou, who was prone to tinkering, who so intuitively mashed together what worked, would approve of my own addition: a scant quarter teaspoon of my grandmother’s garam masala.