The designer Rejina Pyo moved to London from Seoul, South Korea, in 2008 to study fashion at Central Saint Martins, under the esteemed professor Louise Wilson. Not long after, she met her husband, the chef and cookbook author Jordan Bourke — and then, much to her parents’ dismay, she never moved back home. After graduating, Pyo joined the team of the London-based designer Roksanda Ilincic — with whom she shares an affinity for deeply saturated colors (taupe, ocher, plum) and fluid, oversize cuts — before starting her own eponymous line in 2014. Now known for its easy, elegant pieces such as puff-sleeved cotton dresses, relaxed trench coats in laminated wool and asymmetrically cinched linen suits, the brand has become a fixture on the London Fashion Week schedule. (The birth of Pyo’s son, Luka, in 2017 only further entrenched her in England.) Nevertheless, after 11 years away from her hometown, the designer revisits her Korean roots on a nearly daily basis, through food.

In 2016, Bourke and Pyo released an award-winning cookbook together. Titled “Our Korean Kitchen,” the collection of hearty recipes is an ode to authentic Korean cooking inspired by the dishes the couple eat at home with their son. In the label’s early days, the pair would stay with Pyo’s parents in Seoul for weeks at a time; Pyo would finalize accounts and production for her brand while Bourke, who would later go on to work alongside the Michelin-starred chef Skye Gyngell at the acclaimed Petersham Nurseries Cafe for three years, worked in the city’s restaurants. “He learned a lot from my mum because no one really cooks from recipe books — it’s all very intuitive,” says Pyo. “I’d just watch and learn by osmosis,” explains Bourke. “Food there is all about sharing, respect, kinship, togetherness. Even if you’re working, you’ll always make time to go out for dinner and eat together.”

To share their love of Korean food and celebrate the start of summer, the pair invited 40 friends, colleagues and collaborators to come together for a Korean feast in London on a balmy evening in June. Because their family home in north London is undergoing renovations, the couple held their dinner in the airy SoHo loft of Pyo’s friend Alex Eagle, the director of a small collection of luxury concept stores: Alex Eagle Studio on Lexington Street in London, and The Store X at SoHo House Berlin and SoHo Farmhouse in the Cotswolds. Eagle moved into the apartment, a former parking garage one block from Carnaby Street, four years ago and quickly transformed it into a white-walled oasis, decorated with many of the same furniture and design pieces she sells at her stores, along with a tightly honed edit of fashion and jewelry brands such as Lemaire and Sophie Buhai. Kids ran around the open-plan living space, dodging a blue Yves Klein Plexiglas coffee table and cherry wood Nakashima chairs, with bowls of white rice in hand. Meanwhile, guests including the British artist Phoebe Collings-James, the gallerist Antonia Marsh and the arts publisher and curator Lucy Kumara Moore — many of them dressed in Pyo’s artfully low-key designs — ate an array of Korean dishes prepared by Bourke. Piled high on what Eagle calls the captain’s table — a leather-topped mahogany piece salvaged from a 19th-century ship — the bowls and small plates were replenished through the night as guests grazed. Here, Pyo explains how to pull off a similarly effortless evening.

The key to making your guests feel at home is to drop the decorum, says Pyo. “When we have a dinner party at home,” says Bourke, “it’s all about abundance, celebration and relaxation. I hate place names and that feeling of everyone being polite when they all desperately want the last potato.” Bourke designed the menu accordingly, allowing for guests to stand or sit, chat, drink and graze continuously: The ubiquitous Korean fried chicken (which is first confited and then deep fried and drenched in a sweet and spicy gochujang chili sauce) was served deboned — unorthodox but ideal for devouring with one hand. Soft salmon cured in white miso (it’s sweeter) came in bite-size cubes like chewy Turkish Delight, topped with a wasabi crème fraîche. The couple also served japchae, a Korean dish of sweet potato glass noodles tossed with sautéed vegetables and toasted sesame oil — it was the first dish Pyo ever cooked her husband, which “won my heart,” he says — and cut the noodles short for easier scooping. 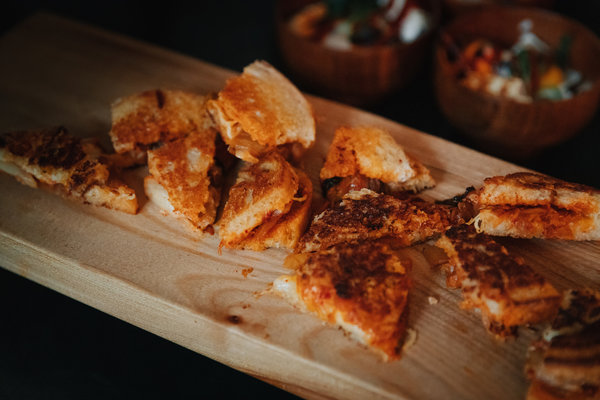 Pyo loves to rework a classic, in both her design studio and her kitchen. While the traditional Korean dish bibimbap — a medley of rice, sautéed vegetables and kimchi typically served in a hot stone dolsot bowl and topped with an egg — was present and correct, Bourke also served more unusual offerings such as tiger prawn tacos and fried kimchi Gruyère toasted sandwiches (for these, half the kimchi was fried until caramelization, the other left crisp and acidic). “Koreans love a Western take,” Bourke explains. “There are so many Italian restaurants there that mix kimchi through their spaghetti carbonara for that bit of acidity — the toasties would be a hit in Korea too.”

Eagle turned to her team at The Store X to provide cocktails that would complement Bourke’s spicy menu. Tommy Tannock, The Store X’s head of food programming and events, chose Jinro Soju — a Korean spirit akin to vodka, made from rice, barley and tapioca — for a clean lemongrass slinger. “Then we needed some cooling elements to fend off the kimchi tang,” Tannock explained. He opted for a muddled cucumber gimlet with Hendrick’s Orbium gin and a Mai Tai made with smoky Oaxacan Pensador Mezcal — “the perfect foil for the fried chicken’s moreish gochujang bite,” he says.

Arranged across a table, in between stacks of roughly hewn Rustico Stoneware plates, were piles of fruit: glossy orange persimmons, crackle-skinned cantaloupes, fuzzy white peaches and dusty burgundy grapes, each of which was sliced and served for dessert, having performed double duty during dinner as a tableaux that recalled a 17th-century Dutch still life painting in a palette of marigold and russet. “To me, marigold colors are happiness,” Pyo says. Simone Gooch, the founder of the florist Fjura and a regular collaborator of Eagle’s, followed suit by sourcing butterscotch yellow John Howard dahlias from a grower in South Darenth, Kent. Looming at four feet tall, they stood in their own earth, in reclaimed glass fish tanks, among the food. The following weekend, Eagle replanted the flowers in the garden of her weekend house, a 200-year-old cottage in the village of Wootton in West Oxfordshire. “My flower bed has become a smorgasbord of plants from all our parties,” she says.

“I have never planned my outfit longer than a day in advance — it just depends on my mood that day. I want to be comfortable,” Pyo says. For this dinner, she wore a boxy shirt in crinkled violet satin over a black bandeau top and a lime-green asymmetric midlength skirt — a mix of pieces from her pre-fall and spring 2019 collections that looked part surf, part soiree. “It’s nice not to be strict,” she says. That same spirit pervades Pyo’s label. “Tonight is a testament to how it suits everyone,” Eagle says. “Her undone tomboy style is unpretentious, not overly seasonal or designed but always with a sense of fun and vibrancy.” The same could be said of Pyo’s hosting style.

Related posts:
07/22/2019 Entertainment Comments Off on How to Throw a Festive Korean-Inspired Dinner Party
Recent Posts
We and our partners use cookies on this site to improve our service, perform analytics, personalize advertising, measure advertising performance, and remember website preferences.Ok