For anyone watching the protests in Belarus, there is one song that keeps being heard in the crowds.

Its name is Khochu Peremen. It’s a song about waiting for change, and it has deep resonance for millions of people across Eastern Europe. To understand its significance, you need to go back to a young boiler engineer in St Petersburg, who died 30 years ago.

The boiler room where Viktor Tsoi worked in the 1980s is now something of a rock shrine. Tsoi’s day job was, however, not what made him famous.

A 1987 film called Assa, which became a cult classic in the Soviet Union, highlights his importance. The film ends with a scene in which a young singer arrives at a restaurant and is read out all of the rules of being an official performer.

Rather than standing and listening, he announces that he is a poet and leaves and joins his waiting band. As the song develops, the camera swings round to reveal Viktor and the band are playing to a huge crowd. The song is Khochu Peremen (Changes, or We Are Awaiting Changes).

Caroline Ridler from Nottingham University has written about Tsoi and says this was the moment that brought him to a mass audience and made him a “symbol of change”.

At the beginning of the 1980s, rock music was largely an underground movement in the Soviet Union. Records from bands in the West were smuggled into the country and there was strict control over who could perform.

The film Assa became symbolic of the rapid cultural changes taking place in the USSR – changes that had begun with Mikhail Gorbachev’s new policies of Glasnost (openness) and Perestroika (political and economic restructuring).

Thirty years on, Tsoi’s song is now being sung on the streets of Minsk. In 2011, it was sung in Moscow by protestors opposing Vladimir Putin. It has also been sung at rallies by supporters of Putin.

Caroline Ridler says: “It has now become an anthem of political opposition.” But she adds that the image of Tsoi as a revolutionary is also inaccurate. From what he said, he had no intention for it to become a political anthem, or for him to be a revolutionary figure.

“He was making the most of Glasnost and Perestroika. He was on state television. He benefited from what was going on. He said it was a song about inner change,” Ms Ridler says. 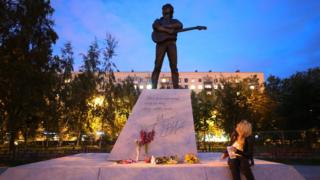 Indeed, in many ways, this was far from subversive.

However, three decades on, the song’s lyrics and rousing chorus have made it a popular choice at various opposition demonstrations. The lyrics are just vague enough to suit whatever demands for change are being made. But how should Viktor Tsoi be remembered?

In Russia, his band Kino are marking the anniversary of Viktor’s death with a reunion. There are also memorials – one of the largest is in Kazakhstan. His father is from the country’s Korean population. But his legacy is complex.

He was the great rock “outsider” who was also a member of Leningrad’s official rock club. He took part in underground apartment concerts known as Kvartirniki and was appalled when one of his albums was released by a state label, but he also appeared in an official film and TV programmes.

He wanted to be a rock star, and to do that he had to navigate a line between the state and the underground. But one element of the story has, Ms Ridler says, helped his legacy.

Viktor Tsoi died in a car crash in August 1990. This was a moment of great upheaval, but it was before the break-up of the Soviet Union and the political turmoil of the 1990s.

In 1990, most agreed there had to be change. But as Ms Ridler says: “Viktor never had to choose which side to join.”

08/26/2020 Entertainment Comments Off on How a 33-year-old song became an anthem for change
Recent Posts
We and our partners use cookies on this site to improve our service, perform analytics, personalize advertising, measure advertising performance, and remember website preferences.Ok