In Hong Kong in the 1980s, when expensive Cognac was all the rage, legend has it that some smart cook at the Spring Moon restaurant in the Peninsula Hotel on Kowloon got it into his head to name the funky new condiment he’d come up with after the status mark on a bottle of Rémy Martin: “XO,” extra old, rare, very expensive. The stuff was a hit. By the end of the decade, XO sauce was on menus all over Hong Kong and eventually the world.

The name made some sense: XO sauce is built on a foundation of dried scallops and dried shrimp, which smell old and are expensive. In combination with a ton of chiles, a faint pork-smokiness and a whisper of allium, they are a near-perfect example and explanation of the concept of umami, a fifth taste beyond sweet, sour, salty and bitter. XO sauce elevates whatever it touches — fried rice or boiled noodles, a piece of steamed fish, a pork rib, a chicken wing. It is a flavor enhancer, a riot of glutamates. And, because of the name, there’s a logical tautology to why the wok-fried Chinese broccoli with XO sauce costs 50 percent more than the plain version. It’s XO on there! 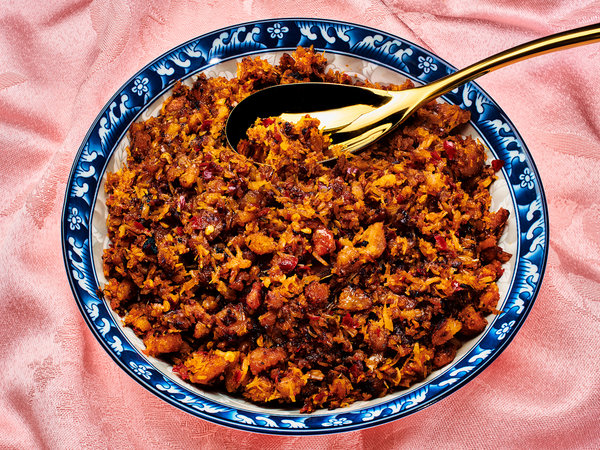 Recipes for XO change from restaurant to restaurant, cook to cook, family to family. The only real constants are the dried scallops and dried shrimp. Cooks in China may add air-dried Jinhua ham to the mixture (also expensive), where versions in the United States use bacon, or the Chinese sausage lap cheong. Wilson Tang, the owner of the Nom Wah Tea Parlors in New York and Philadelphia, sometimes uses Virginia ham. Some add soy sauce. Others use chicken stock to loosen the mixture. In restaurants, XO sauce comes suspended in a lot of oil, to stretch the number of people each batch serves. At home, the mixture can be thicker, more crumbly.

The XO sauce I keep in my refrigerator to spoon into stir-fries and sprinkle over vegetables and dab on eggs owes its excellence to the writer and cooking teacher Diana Kuan, author of the recent “Red Hot Kitchen,” a cookbook devoted to the creation of classic Asian chile sauces. Kuan’s recipe comes together serially, mostly in the bowl of a food processor, and then in a wok. The only hard part about it is the shopping, and even then not really; dried seafood is easily purchased online.

“You don’t want to buy the really big, really expensive ones,” Kuan said about the dried scallops one afternoon, making XO sauce with me in her tiny kitchen in Park Slope, Brooklyn, sun dappling her cutting board. “That’s wasteful. Fingertip-size is fine.” (Her shrimp were even smaller, the size of popped kernels of corn, pink-orange in hue.) Hard and pearlescent, the scallops soften when steamed, and when Kuan put them in her food processor, they almost exploded into confetti, a fluff she scraped into a bowl.

Later, after whizzing the chiles and after that the shrimp and bacon, Kuan turned to the wok. “There’s a nice bright scent now,” she said as she first stirred everything around, “but we’ll eventually get to a darker, crisper smell, like when you roast vegetables almost too long. That’s when it’s done.” I remind myself of that every time I make XO. You want the mixture sizzling, right on the uncertain edge, almost burning — and then you want to get everything out of the wok right away to cool. The mixture should be moist with oil but by no means saucelike, as you might see XO served in a restaurant. Stored in a jar in the refrigerator, it will last for at least a month.

Put XO on whatever you like. I add it to dinners of kung pao chicken and stir it into bowls of instant ramen to eat over the sink. It’s a great addition to a bowl of cold sesame noodles. I especially like to toss green beans with oil, then season them with a few tablespoons of XO and roast them on a sheet pan in a hot oven until they’re wrinkled and almost crisp.

And feel free to alter the recipe to your tastes. I sometimes like to drizzle a whisper of rich mushroom soy sauce into Kuan’s version of XO, and I’ve added oyster sauce to a batch as well. I’ve seen recipes incorporating Maggi seasoning, fish sauce, garlic, country ham, baby anchovies and dried cod roe. Whatever ingredients you choose, the idea is simply to layer big flavors on top of each other like cartoon sound effects: Pow! Blam! Vaboom! It never gets old.