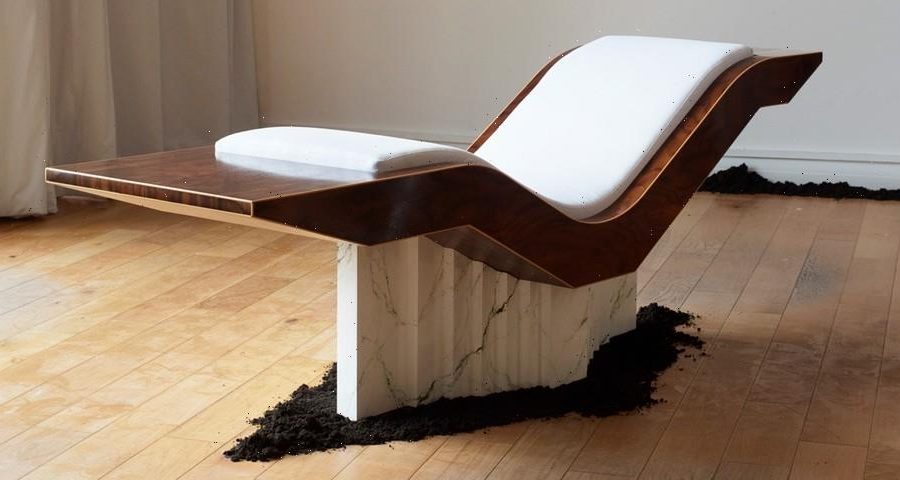 A series of works by designers and artists who each prioritize material exploration through their practice are on show at an exhibition in London, curated by The Radford Gallery.

The show, named “Hard Knocks”, brings together eight creatives, with many of the pieces never-before-seen in a public setting. Its concept is centered around designers who are building the foundations of their work through similar materials, but who are creating vastly different outcomes.

Many of the designers have multiple works on show – from chairs and coffee tables to lamps and wall pieces. A chaise longue named “Il Sandolo” has been created by EJR Barnes from a combination of walnut, fibreboard, cotton, foam, and paint, while Samuel Collins’ “Horizontal Displacement” table has been carved from Purbeck Marble – a fossiliferous limestone found in the Isle of Purbeck, a peninsula in south-east Dorset.

Elsewhere in the show, pieces range from clean-lined works by Lewis Kemmenoe, some of which feature intricately patterned timber surfaces, to Carsten In Der Elst’s “Graywacke” series of chairs, which make use of a boldly monolithic silhouette. “Unearthed” by Katie Brett uses aluminum to create one of the show’s most modern-looking pieces, and provides a futuristic contrast to the works of Matthew Verdon, who has used hemp fabric, bamboo, and hemp twine to create a series of lamps. Finally, pieces by Meryl Yana are mounted around the walls of the Baltic Studios gallery space and have been produced from a mixture of paper, turmeric, indigo powder sourced from India, and emulsion paint on MDF board.

“Following on from our last show we have continued to focus the gaze on a concentrated group of contributors who have been working with similar materials in their practice currently.

This has created a warm and cohesive language for the show whilst still allowing each work the space to express its distinct individuality.”

Hard Knocks is on show at the Baltic Studios in London’s Hackney Downs until August 7. Elsewhere in design, Studio Other Spaces, the Berlin-based office founded by artist Olafur Eliasson and architect Sebastian Behmann, has created a multicolored conical canopy for the Donum Estate in Sonoma, California.