The conductor Gustavo Dudamel was in the pit at the Metropolitan Opera leading a rehearsal recently when he decided it was time to jump ahead to the climax.

“We need Otello to come and kill Desdemona, please,” Mr. Dudamel intoned in exaggeratedly hushed tones into a microphone, drawing chuckles from the orchestra and singers by summoning death to the stage the way an airline gate agent might page a passenger.

Mr. Dudamel, the music director of the Los Angeles Philharmonic and one of the most celebrated conductors in the world, was getting ready to make his Met debut on Friday, with Verdi’s “Otello.” And he was jumping into the opera house with his customary gusto.

He asked the violinists to inject more suspense into one phrase. (“Yeah!” he said excitedly. “Now I get afraid!”) But he also frequently asked for softer playing: “You know, the best champagne is the one that has the smallest bubbles.” And it was restraint that he sought from his Desdemona, the soprano Sonya Yoncheva, as they worked on her final prayer.

“When you pray,” he told her, “you don’t make a big drama, because it’s so intimate.”

It was that intimate prayer, the “Ave Maria,” which Desdemona sings just before she is murdered by her jealous husband, that Mr. Dudamel cited as his favorite page of the opera. It is one of the work’s most famous scenes, but is perhaps a slightly surprising choice for Mr. Dudamel, 37, an exuberant conductor known for grand gestures and his ability to whip up excitement in higher-decibel moments, of which there are many in “Otello.”

Mr. Dudamel — who is on an unusual extended East Coast sojourn that also includes concerts and lectures at Princeton University — explained his choice shortly after rehearsal. Here are edited excerpts from the conversation.

There are so many big moments in this opera, like the storm it opens with, or the “Credo” sung by the villain, Iago. But you went with a quiet moment.

After you have been doing all these huge, dramatic things — with this huge orchestration — Verdi goes to simplicity. Only strings, and a soprano singing a prayer. This is something very simple. The page is one of the keys of the opera.

The last thing that I said to the orchestra [at rehearsal] is that I don’t like to be asking them for less and less and less. Because I’m the opposite! I’m a conductor of — a very euphoric conductor. But with time you get older, and you start to understand that there are many layers of texture, of color.

Of course one of my favorite things is the first page of the opera. In the first five minutes you are immersed in the thing. But that is obvious: explosions, cannons, choirs, everything. When you go to the places that really build the tragedy, they are very simple, small places. For me, this moment is the beginning of the end.

The prayer starts all on one note, as she recites “Ave Maria, piena di grazia,” and then shifts. How does it work?

She is holding one note, and the orchestra is moving harmonically. You think you’ll go to a cadenza, it seems like it’s going to the tonic, but it doesn’t go. All of this “preghiera” [prayer], he makes like a question. 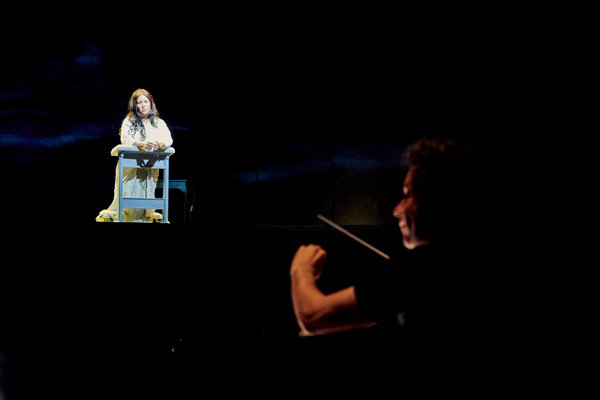 It’s also almost like she knows she’s going to die, and she’s praying to purify her soul.

It’s like a premonition. Then, after, comes the moment where Verdi, amazingly, writes a double bass solo and creates this very dark moment.

And Otello’s first words before he kills her are asking whether she has prayed.

I believe sometimes the secrets of a dramatic play are in the small places — in the places you never think they would be. But I believe that we build from the small things to the big things.

Especially when you are studying a score: how to dimension everything, for this not to be weak. If you start from here [he opens his score and flips to the first page], you have canons, percussion — this is obvious, this is a storm, this is excitement.

Then, to arrive here [he flips to the “Ave Maria”], the arc that we build, for this to make sense — this is the secret. And sometimes you have to start with this first, and then dimension the rest.

How is it coming to the Met?

After all of these years, having a chance to make a debut with an orchestra like the Met’s is amazing. After conducting around the world, to arrive here and have the chance to do this amazing work. They are so generous. They know, really well, the music. But they are so open to work and try to understand things. Because sometimes we assume tradition.

With something like the “Ave Maria” — if you have these keys, these technical doors that you go and you explain, the rest changes. You don’t have to talk more about it.

12/12/2018 Entertainment Comments Off on Gustavo Dudamel’s Favorite Part of ‘Otello’ is a Quiet Prayer
Recent Posts
We and our partners use cookies on this site to improve our service, perform analytics, personalize advertising, measure advertising performance, and remember website preferences.Ok