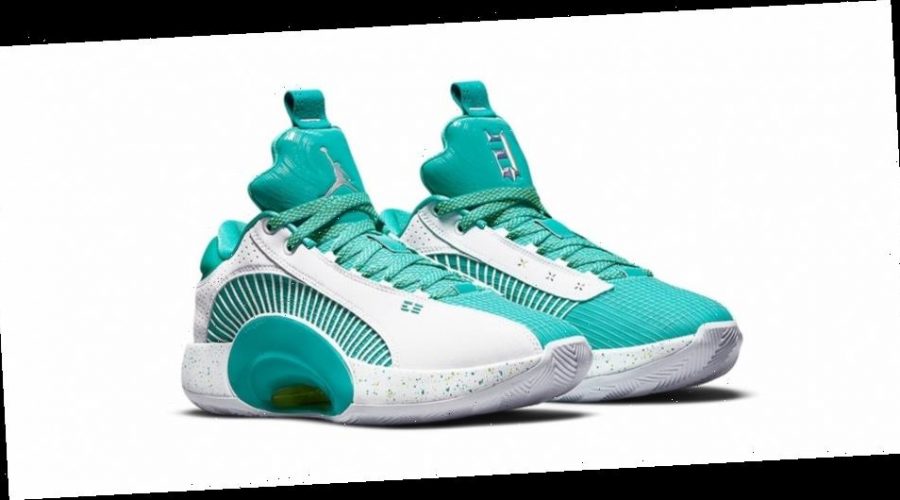 Jordan Brand‘s hoop athletes have the luxury of receiving a variety of special player exclusives during their professional tenure, one of those being Guo Ailun. In past years, the pro CBA player has received striking iterations such as the AJ 35 “Blue Morpho Butterfly” and a comic-inspired Air Jordan 34 Low, and he’ll be first to debut the Air Jordan 35 Low in his own color scheme.

Most of the elements and choices of materials of this silhouette such as the exaggerated Eclipse plate, leather overlays and mid-foot cables are essentially carried over from the original, only the ankle collar has been completely discarded to assist in forming its lower profile.

Judging by the looks of its two-toned palette, this pair almost channels a similar aesthetic to the Ailun’s Air Jordan 34 PE that was revealed during Fall 2019. A clean white hues the forefoot and heel overlays, the latter of which is perforated in texture, while the underlays and Eclipse plate are dialed to a jade green. Embellishments relative to the Liaoning Flying Leopards’ hooper are spotted on the right side tongue which has his first initial as well as on the heel which swaps out the usual tabs for Chinese character signage. Moreover, the tongues are slightly modified as they are given swirled patterns in the background.

Shifting gears here to the soles, the mid-section is spruced up with teal and green speckles, while the chevron-patterned outsoles are finished off in white.

No official release info has been announced as of yet, but expect a Nike release to go down in the coming months.

For more on the latest in footwear, an icy Air Jordan 12 Low “Easter” colorway has been revealed.
Source: Read Full Article