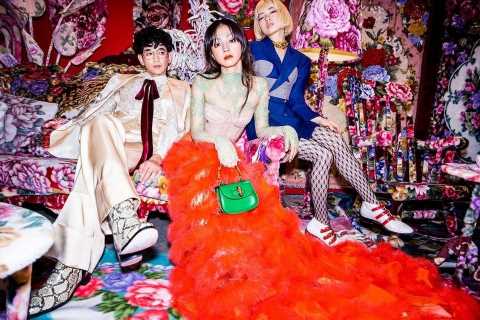 2022 marks 75 years of Gucci using bamboo in its handbags, and in celebration of its legacy the Alessandro Michele-helmed house has launched the Kaguya by Gucci campaign and short film.

Back in 1947, Guccio Gucci and the house’s Florentine artisans struggled to find its usual roster of materials. In an effort to innovate, Gucci started to use bamboo for its lightweight yet durable properties, unknowingly creating the icon that is the 1947 Bamboo bag. Since, Gucci’s use of bamboo has extended across 1947-inspired backpacks and small leather accessories like wallets, while also coming together on the house’s equally significant bag, the Diana.

Now, for its 75th anniversary, Gucci launches Kaguya by Gucci. A short film titled Taketori Monogatari (The Tale of the Bamboo Cutter), directed by Makoto Nagahisa, sees the cast — Hikari Mitsushima, Aoi Yamada, and Eita Nagayama — dressed in the “Gucci Love Parade” collection, each finding themselves with true love at the core of the film.

As for the campaign, we find a spotlight on both the Gucci 1947 Bamboo and Diana bags, appearing in classic colors such as cream and dark green as well as ones in vivid green or in the backpack form.

Take a look at the film and campaign above, and shop the entire Bamboo range from Gucci’s “Beloved” selection online in boutiques worldwide.