Gillian Flynn grew up surrounded by comics. Her father, a film professor and an avid comic book collector, would spend weekends taking her to flea markets and garage sales, explaining the various eras and artists she should know, which strip was loosely based on a Ray Bradbury story, and so on.

Keep this in mind as you watch “Utopia,” the pulpy action thriller that marks Flynn’s debut as a television showrunner, after making her name writing psychological page-turners like “Gone Girl” and “Sharp Objects.” Premiering Friday on Amazon, the show is a rollicking, Dickensian adventure story about a troupe of wide-eyed comic book nerds who think a long lost strip contains the keys to saving humanity from an impending deadly virus.

Its release during an actual pandemic is coincidental, but the quixotic, larger-than-life tone is exactly what Flynn, who has been working on the story off and on for seven years, envisioned. In fact, while a D.C. Comics-like TV serial might seem out of left field for a novelist best known for writing about “damaged, [expletive] up women,” as she described it, the series is in many ways more reflective of the real Flynn. Beneath the dark and twisted novels that have made her a wildly successful author is a lighthearted, thrill-seeking conspiracy theorist with a general distrust of the digital era. 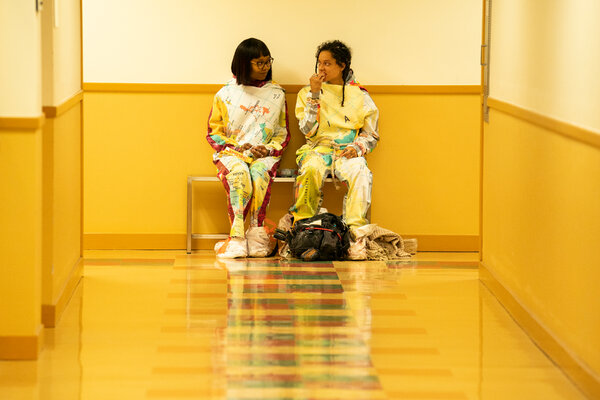 “People tend to imagine Gill as somebody who has these constant sinister thoughts about things, and revels in that,” said David Fincher, the filmmaker who has served as a mentor during Flynn’s transition to the screen. “And she’s really not. She’s dastardly playful.”

That “Utopia” is as mischievous and gutsy in spirit as the author herself makes sense — although Flynn adapted the 10 episodes from Dennis Kelly’s 2013-14 British series of the same name, she ultimately made the story all her own.

“I’m not a fan of remaking something just because the original was really cool,” Flynn said in a telephone interview in early September, from her home in Chicago. Instead, she approached Kelly’s original as a “beautiful D.N.A.,” watching it once through and then freestyling from there, even creating entirely new characters (like Dr. Kevin Christie, a big pharma executive played by John Cusack) whole cloth.

“That’s the only way I could have it become my own, by not constantly looking back,” she said. “I took two lines from Dennis’s original, and everything else I rewrote.”

“He was incredibly cool about me getting in there and mucking around in his world,” she added, “which is more than I could say for how I would’ve been if someone had taken ‘Sharp Objects’ and been like, ‘And now I’m going to do anything I want with it, ha ha!’”

“Utopia” isn’t Flynn’s first foray into onscreen storytelling — she wrote the 2014 film adaptation of “Gone Girl” and was in the writers’ room for HBO’s 2018 mini-series version of “Sharp Objects.” And despite the surface departures, “Utopia” is perhaps not all that different in theme from her earlier so-called domestic thrillers — a term she wishes would “be banished from the face of the earth,” she said, used as it is mostly to “denigrate an entire group of writers because we’re women.”

Though her lens has widened beyond the intimacies of marriage and the home, paranoia and unreliable narration have remained constant threads throughout Flynn’s work. In “Utopia,” that anxiety has simply mushroom-clouded into a full-blown global conspiracy.

Flynn herself is a little paranoid. She’s not very online, for instance; she has the requisite Twitter account, but she says she uses it only sporadically, “in streaks,” which is believable if you consider that 25,000 followers seems somewhat low for one of the most recognizable names in contemporary publishing. “Every time I post something, I get this nervous feeling,” she said, “like, have I given away too much?” (For this interview, her publicist declined a video call on her behalf.)

Channeling this digital reticence into “Utopia,” Flynn took her cues from “all those ’70s paranoia thrillers that came out post-Watergate: ‘Parallax View’ and ‘Marathon Man.’”

As a result, the world these characters occupy can appear anachronistically analog. In the pilot’s opening scene, the titular comic strip is discovered as a pile of dusty pages rotting away in an abandoned house. The show’s heroes are strangers who meet on the internet by virtue of their shared obsession with an obscure, out-of-print graphic novel, and the audience is asked to believe that these characters never know what the others look like until they meet, I.R.L.

“I like the idea that these people are forced to figure each other out in order to survive,” Flynn said. “Who are we all really? Are we an amalgamation of things we create online, or are we people?”

The conceit was a tough sell at first. Anyone who read it, from the studio to the actors, asked her, “Do we really believe in this day and age that they would go for almost a year knowing each other and never even swap a photograph?” Flynn said. “I don’t know, maybe they’re like me, and they feel a certain freedom in that.”

Flynn’s involvement in “Utopia” originated with a decidedly offline adventure: an impromptu road trip in the fall of 2013.

Summoned down to Cape Girardeau, Mo., by Fincher to talk about an unspecified project (he was in Missouri to direct the film adaptation of “Gone Girl”), she rented an orange-and-black-striped Dodge Charger convertible and drove herself down.

Cape Girardeau was far and hard to get to, and she had no idea what awaited her. But it was Fincher, so she went for it, embracing the opportunity to “eat Slim Jims and play heavy metal and just enjoy myself,” Flynn said, panting ever so slightly as she roller skated around her kitchen. (She’d recently bought a pair of hot pink skates to prove to her daughter that mom still had the moves.)

Encouraged by their collaboration on “Gone Girl,” Fincher hired Flynn to write a version of “Utopia” he was making for HBO. He brought her in for her enthusiasm and tenacity, he said, explaining that Flynn’s motivating passion is not just for storytelling, but for being in an audience. Once she’s invested in a story, he said, “she’s an 11-year-old girl with a giant bucket of popcorn in her lap, going, ‘No, and then this should happen, and then this should happen!’ It’s very infectious.”

When budgeting issues later threatened to upend the project, Fincher encouraged Flynn to take her scripts elsewhere, and she did. With Amazon, she assumed the showrunner role and brought on Jessica Rhoades, a producer on “Sharp Objects,” to be an executive producer.

Rhoades said she’s excited for viewers to get to know the author’s humorous side. “People are always surprised by how wickedly funny Gillian is in person,” she said. When she first read all 10 scripts of “Utopia,” she was stunned by how much fun it was.

“I thought I knew her writing before,” she said, “but it was a world-rocker.”

Flynn’s gift for storytelling is evident in conversation, too. Having cast her young daughter (and herself, and her other family members) in a cameo role, she recounted the day they filmed her then-4-year-old’s scene on the moving Chicago L train. The time window was narrow, and just as they were about to start rolling, as if on cue, the girl looked up at Flynn and said: “Mama, I have to poop.”

Her daughter then thought the grimy Chicago Transit Authority restroom was the “movie star bathroom,” Flynn said, so when Flynn took her own turn in the stall, the girl said, “Um, I don’t mean to be rude, but are you allowed to use this bathroom? You’re not a movie star.” (The young movie star was unavailable for comment.)

It was the kind of slapstick scenario one never experiences within the solitude of writing a book. As enjoyable as she found much of the process, going from novelist to showrunner was for Flynn also an exercise in collaboration, and humility.

“There’s a very different dynamic from being on your own for a couple of years at a time in your little basement lair, where you control everything in this world, you don’t have to think about casting, locations, budgets, anyone else’s notes, just yours,” she said. “There’s a purity to that that I still appreciate.” (She’s not done writing books; she has a contemporary retelling of “Hamlet” coming out next year.)

Patrick Somerville, the novelist who also wrote the 2018 Netflix series “Maniac,” said that this purity was often what made authors such great screenwriters. They’re “not corrupted,” he said, “or, if corrupted is too strong a word, not changed in the way that the forces of the TV industry tend to change writers.”

By early March, “Utopia” was in final edits, with Flynn flying back and forth from Chicago to Los Angeles to sit in with the editors. On her most recent trip, “I left saying, ‘All right well I’ll see you guys in two weeks!’” she recalled. “And then everything shut down.”

It was an ironic twist for a story that Flynn was afraid might seem too unrealistic when she first started thinking about it, seven years ago. Back before she had to start distinguishing between “the pandemic in real life versus the pandemic in TV life,” she had put together a file of historical disease vectors and outbreaks “to make the case that this world that I was pitching wasn’t so crazy,” she said. (In “Utopia,” the pathogen primarily targets children in American public schools, so already beleaguered parents should consider themselves warned before watching.)

Ultimately, the question the show urges viewers to ask themselves is both of-the-moment and, in many ways, as old as time: Who’s to say what around us is true and what’s imagined? When everything we read and experience seems impossible, how do you tell the realistic from the patently insane?

“Even when you think you’ve found the truth, you may realize that you’re fooling yourself through your own biases,” Flynn said. “Everything could possibly be a conspiracy if you look hard enough.”

09/23/2020 Entertainment Comments Off on Gillian Flynn Takes Her Paranoia to Television
Recent Posts
We and our partners use cookies on this site to improve our service, perform analytics, personalize advertising, measure advertising performance, and remember website preferences.Ok