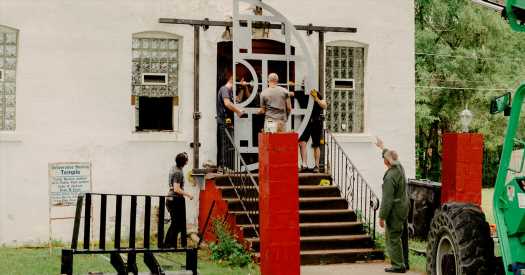 CHICAGO — On a sunny morning in June, the artist Mel Chin nearly got bonked on the head by an enormous steel frame that was dangling from a telescopic forklift as it was being moved into place atop the front steps of the Civic Arts Church on a quiet South Side block.

The crew grimaced but Chin deftly ducked and looked unfazed. He grabbed the piece, part of an artwork in the form of an elaborate bank-vault-style door, and helped push it in place. Voilà.

Perhaps one quality of being a genius — or at least the recipient of the “genius grant,” as the MacArthur fellowship is colloquially known — is a high degree of spatial awareness, as well as a lack of fear.

Chin is one of 29 visual artist MacArthur fellows contributing to a biennial-style exhibition all over this city that celebrates the 40th anniversary of the fellowship, begun in 1981 by the Chicago-based John D. and Catherine T. MacArthur Foundation.

“Toward Common Cause: Art, Social Change, and the MacArthur Fellows Program at 40” includes more than two dozen shows and specially commissioned installations.

“Toward Common Cause” officially opens Thursday, but the exhibition start dates are staggered, with some already on view and others coming in the fall.

Two of the main group exhibitions, at the Smart Museum of Art at the University of Chicago and the Stony Island Arts Bank, open this week and will feature around a dozen artists each, including Nicole Eisenman, David Hammons, Trevor Paglen and Carrie Mae Weems.

The exhibition was initiated and funded by MacArthur with $1.23 million in grants to its organizing partner, the Smart; around $500,000 in additional funding and in-kind support came from other donors.

Chin’s door is an example of social practice art, the concept at the core of the show. “When you do social practice, it’s about permission and engagement,” said the artist, who is based near Asheville, N.C.

In his case he teamed up with the Sweet Water Foundation, an innovative neighborhood development nonprofit headquartered a block away from the church. The foundation is turning it into a community design center, where, among other projects, participants will make artistic currency that Chin calls “Fundreds,” hand-drawn versions of a $100 bill that are part of a collaborative action to fight lead contamination.

Though social practice is all over the art world these days, it’s rarely seen at this scale. “In a way, the show is a single social practice work,” said Don Meyer, the MacArthur senior program officer for the fellows program.

But organizing so many stakeholders has challenges. “Partnerships are really hard,” said Abigail Winograd, the curator hired by MacArthur to organize the show, almost four years in the making. “This is why museums don’t normally do this — it’s insane.”

Physically, “Toward Common Cause” spreads over not only traditional gallery spaces but also housing projects and bus shelters.

“We want to meet people where they are,” Winograd said.

Paradoxically, a show of artists celebrated for their individual accomplishments is intentionally diffuse, collaborative and community-oriented, but that fits the theme, an exploration of how resources can be shared.

“The 19th-century idea of the lone genius has faded, and collaboration is seen as increasingly important,” Meyer said.

Winograd ran with the idea, and then some. “In a way, it’s a crowdsourced curation,” she said. “I’ve even ceded control to teenagers.”

Participants in the Smart Museum’s teen program had input on the banners created by the Los Angeles-based painter Njideka Akunyili Crosby, which are on the exteriors of both the future home of the National Public Housing Museum as well as the Minnie Riperton Apartments, part of the Chicago Housing Authority.

“The teens carried this project,” Akunyili Crosby wrote in an email, noting that during their remote working relationship, they even did location scouting. After looking at some of her previous work, the teenagers settled on what she called scenes of “intimate family moments and spaces.”

Akunyili Crosby said that for exterior works that would be up for months, she knew she wanted to have a “partnership with Chicagoans,” adding, “They should have a say.”

Tiffanie Beatty, the National Public Housing Museum’s director of arts, culture and public policy, said that the museum’s purpose was to make sure “the history and culture won’t be erased” given that many housing projects, like Chicago’s Cabrini-Green, have been torn down in the past couple of decades.

“We love working with people like Njideka to tell the story of home,” she added.

For Winograd and her group, one of the day’s many obstacles was the back-and-forth between the Smart team and the Chicago Housing Authority over the type and size of fastener used to hold up the banners on the facade of the Riperton Apartments.

“It’s all coming down to the difference between a half-inch and three-eighths of an inch,” said Ray Klemchuk, the Smart’s chief installer, who was clad in practical overalls.

The scale and scope seemed to impress another MacArthur fellow participant — Iñigo Manglano-Ovalle of Chicago, known for his community-oriented projects — who showed up at Sweet Water as Chin continued his installation.

“Given the pandemic, I’m actually surprised that this is all coming together,” he said.

Manglano-Ovalle’s contribution to “Common Cause” is a piece from his “Well” series, “Hydrant, 41°47’22.662” N — 87°37’38.364” W.” It is a functional hydrant installed on the main Sweet Water Foundation property and partly used for the foundation’s extensive farming operation.

“The original well was a response to Conceptual land art like Walter De Maria’s ‘Vertical Earth Kilometer,’” Manglano-Ovalle said of the mostly hidden, underground work. “What if that gesture became a utility?”

His wells become the property of their owners once installed, but “the wells cease to be a work of art if any money changes hands for the water,” he said.

The permanence of the hydrant is another core aspect of several of the “Toward Common Cause” installations.

“Part of the problem with the biennial model is that it happens and it disappears,” Winograd said. “That was not the goal here. The idea was to have this art as a community resource.”

A couple of days earlier, Rick Lowe was in Chicago to work on his piece, “Black Wall Street Journey,” a title that refers to the center of Black economic power that was destroyed in the 1921 Tulsa Race Massacre in Oklahoma.

Lowe, best known for Project Row Houses in Houston, where he is based, said his focus is “the revitalization and rebuilding of Black commercial centers of communities.”

To that end, he was standing on 51st Street near the Green Line stop on the El in the Bronzeville district, famed in the early 20th century as a center of Black commerce and culture.

It’s here that one of Lowe’s three monitors displaying information about Black wealth and entrepreneurship will be placed in the window of Urban Juncture, a Black community development nonprofit. (The other two will be at the Smart and the School of the Art Institute of Chicago.)

“The problem with most statistics on this topic is that they’re comparing Black wealth with white wealth,” Lowe said. “You can’t get into the nuances of changes in the Black community by doing that.”

Lowe is working with Urban Juncture to raise money to fund programs like entrepreneurship networking events that will last beyond the exhibition. The ongoing programming “fits my idea of social sculpture,” Lowe said. “It’s a performance, in a way.”

Lowe’s project, like many in “Toward Common Cause,” is centered on Chicago’s South Side. But Wendy Ewald’s work, “Daily Life and Dreams in the Pandemic: A Project With the Centro Romero Youth Program,” hinged on a partnership with a North Side organization, Centro Romero, which provides legal services and other assistance to immigrants, many of whom are Latino.

Ewald, who is based in New York’s Hudson Valley and is known for her photographic collaborations, noted that she’s been engaging in social practice for more than 50 years.

“When I started out, what I was doing was not seen as art,” she said. “With time people have understood it better.”

Collaborating with Centro Romero’s teenagers at first remotely and later in person, Ewald asked them to photograph and write about their lives. She is scanning and enhancing their work, combining the images and texts. This fall the resulting artworks will be on selected local bus shelters and in a show at the Weinberg/Newton Gallery in the River West neighborhood.

Ernesto Aparicio, 13, said that he learned the term “still life” by working with Ewald.

“The best one I took had a bunch of things that represent my family and me,” Aparicio said. “There was a pot to make beans in, a guitar, some chocolate that we use, and a table covering that my grandmother brought from Mexico.”

Other students connected their experience to the wider world, finding the common cause of the show’s title in events that galvanized millions. Marestela Martinez, also 13, took a picture of a mural depicting George Floyd, the Black man murdered by police in Minneapolis last year.

“It’s not just the photos, it’s the whole story around it and the text,” Martinez said. “I wrote that George Floyd’s daughter is going to grow up and look at her father’s last moments.”

07/13/2021 Entertainment Comments Off on Genius at Work: 29 MacArthur Fellows Show Their Art in Chicago
Recent Posts