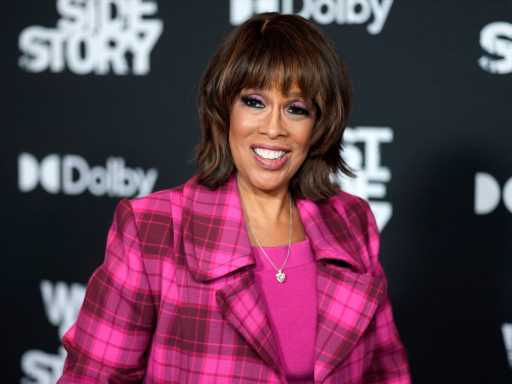 Has it really been that long? We honestly can’t believe that today marked 10 years since Gayle King started working at CBS Mornings. Naturally, such a major career milestone called for a special celebration. And, wow, did King celebrate! The author, broadcast journalist, and Oprah Winfrey’s BFF celebrated her CBS Mornings anniversary by wearing the stunning yellow dress she wore on her very first day — and on every anniversary since.

King, of course, wanted to share the moment with her fans and posted a series of photos to Instagram to commemorate the day. The very first snapshot? Well, it featured King rocking her yellow and white dress with a pair of bold yellow heels to match. Behind the newly minted grandmother, who struck a fun pose, were images of the King wearing the exact same dress on her anniversary dating all the way back to her first day on the job in 2012.

King looked just as fabulous as she did on her very first day, but the celebrations didn’t stop with the throwback photos. The CBS Mornings co-host also got her own cake, decorated with yellow icing. “Happy 10 years, Gayle!” the message on the cake read. King could hardly contain her excitement and happiness in the caption to her Instagram post.

“Ten years at [CBS Mornings] table and it feels oh SO GOOD! I can still fit into my anniversary dress (yay) and there was cake double yay!” King’s caption read. King was completely glowing in her series of photos, and we love her anniversary dress tradition. Honestly, it gives us pause to think of ways we can also treat ourselves on those professional milestones. But until we come up with something, we cannot wait to see King rocking this look for years to come!

Before you go, click here to see actresses over 50 who are more successful now than ever.