Known for his riveting portraits of fictional subjects, the artist shares snapshots of some of the people he is closest to in life, and of an idyllic trip to Vermont.

The Brooklyn-based artist Geoffrey Chadsey is known for his meticulous water-soluble-pencil-and-crayon drawings on mylar of unnerving figures in various states of undress. They bare themselves while “kind of glaring at you,” the artist, 53, says of his invented subjects, whom he frequently bestows with ambiguous forms and states of mind — a portrait might feature a hairy chest and curvy hips, a ghostly set of extra limbs, or a fanny pack and antlers. Currently, Chadsey is working on a new series for a 2021 show at Jack Shainman Gallery in New York and thinking more than ever about how an exposed body can be “monstrous, clownish and, at the same time, really touching.”

The canvases hanging on the walls and strewn about the floor of Chadsey’s Greenpoint studio, then, are in stark contrast to the gauzy photographs he took, using an instant Fujifilm camera sent to him by T, this August. Moving between New York and various parts of Vermont, he documented friends, family and animals set against lush surroundings, managing to find moments of beauty and joy in the last days of what was, in many ways, a dark summer. “Drawing through this economic and social upheaval can feel like Nero fiddling through the flames,” Chadsey said. “I’m drawing alone in a studio while trying to stave off the niggling question ‘Now what is the point?’ I don’t have the answer to that yet. But, in the beginning of the shutdown, my roommates and I would do collaborative drawings that we donated to an online auction raising funds for an upstate food bank. They were cartoonish and often obscene and, even amid uncertainty, made us giggle with glee.” 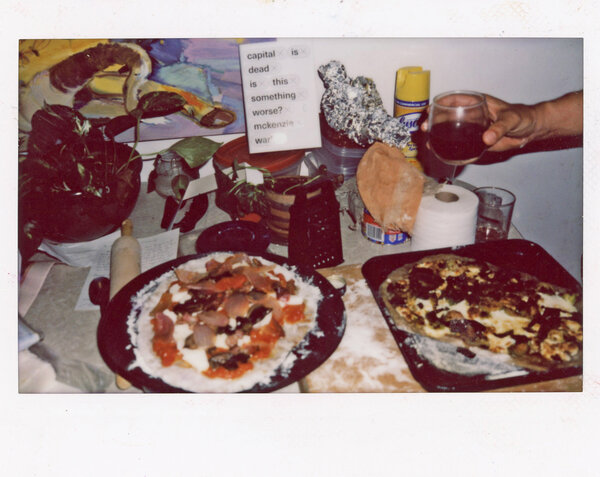 “The studio complex where I work has a kitchen that’s more like a portable convection oven, a hot plate and a toaster. Somehow, though, we manage to cook really grand things, as far as studio food is concerned. I was trying to do that sourdough starter that everyone was doing at the start of the pandemic, but it was like a willfully disobedient pet — it wouldn’t bubble and it would turn weird colors. I had friends who said, ‘Just keep feeding it, just keep feeding it.’ I finally threw it out. The Roberta’s pizza recipe featured in the Times is much easier. Next to the pizzas is McKenzie Wark’s book ‘Capital Is Dead: Is This Something Worse?’ (2019), which I have read maybe four pages of in the bathroom. I keep buying books, thinking that I have all this time to read. The irony of the pandemic is that, because I’m not on subways on the way to work, I just don’t read as much. And so I have books just kind of lying around the studio, and all over my bed and couch. It seemed totemic that one also made its way into this picture.”

“My sister, Gillian, is an actress and a masseuse and, at 50, is engaged to Peter, an actor who plays a murderous cowboy in the video game Red Dead Redemption 2. There have been close to zero weddings in our immediate family — we’ve had marriages, divorces, committed partnerships but very little ceremony — and she was to be married at the end of May, with a three-day party planned in Hudson, N.Y. She commissioned a tailor in Williamsburg to design this beautiful skirt, the final iteration of which will have lace and be worn with shiny boots. The event had to be pushed to September, and then again to next May. It’s stressful for her, because her job is increasingly precarious. But when she’s with Peter, whom she calls Sweetie, they laugh a lot.”

“David and I have been dating for over a year, a casualness that evolved to constancy. We met at a Printed Matter event. At the end of February, he and I traveled to Vietnam, Cambodia and Singapore, returning to New York just as Covid-19 was starting to explode in the U.S. This picture was taken during a subsequent trip to Vermont, which reminded us of Vietnam in that everyone there is so conscious of masks, social distancing, contact tracing. In this photo, David is standing on the rocks at the edge of a river pool, trying to decide if he wants to jump in.”

“Vermont’s so polite about letting you know when you’re entering a nudist area. You’re trekking along this path, and then suddenly there’s a sign that says, ‘Clothing Optional From Here.’ A lot of people stop and take all their clothes off, jam them in their backpack and just keep walking. I was recently laughing with another artist about this: In all my drawings, everyone’s half-dressed, but here my reaction was, ‘I’m not taking my clothes off!’”

“I have a daughter, Rosa, though in no way did I raise her. In 1992, I was volunteering for a queer theater festival in Cambridge, Mass. I thought I would meet a cute boy. Instead, I met two women — Jude and Laura. They were living in a squat in town as part of an organized movement for affordable housing. Nine months after we’d met, they told me they wanted a baby. Miraculously, with a coffee cup, turkey baster, awkwardness and a lot of laughter, we made Rosa. She’s now a 26-year-old artist and just this incandescent, deeply caring, really funny, gorgeous creature. It sounds corny but I’m always agog when I see her. She lives in New Orleans but spent this summer in a small Vermont cabin. Here she is separating birch leaves to boil down into a dye that she’ll use in her work.”

“I live with and share a studio with the artist Angela Dufresne, whom I jokingly call my wife, because what other name captures the totality of this friendship? We met at the Fine Arts Work Center in Provincetown, Mass., back in 2003 and that first night I said, ‘We are going to drink whiskey and become best friends,’ to which she generously replied, ‘OK!’ She is the gutsiest, most curious person I have ever been around, and my world is much larger with her in it. She’s been upstate, so I am missing out on being adjacent to her go-for-broke painting while we blast vaguely satanic metal drone music. Her not being here has been one of the biggest wounds for me during this pandemic."

“Two years ago, David bought a house in the Catskills, an idyll across from a farm with a dog, Duke, and a goat, Poppy, who have adopted David as their own kin. They wander over daily and stand on the porch, waiting to be adored. Poppy also looks like Black Phillip from the movie ‘The Witch’ (2015). It’s hard to read goats. Their eyes are so alien-looking, and you never know what the hell they’re thinking. Duke gets a little jealous, though, so when I was crouching to take this photo of Poppy, chomping on plants, he came up behind my head and barked loudly, startling everybody. This was the only shot I got.”

“What is up with me photographing all these people with flowers and plants? We have a backyard in Brooklyn that has gone to seed. These are two co-worker friends of mine: Victoria is in the back and Ernie is in the foreground. They are BFFs, a little intimidating to get to know at first. They used to run marathons together, and now they box together, so they’re very comfortable with one another. I’m very self-conscious when people photograph me — I have my high school yearbook smile, and that’s about the extent of my repertoire — but they were so excited to be photographed. It was a really fun night. We drank two bottles of rosé and got devoured by mosquitoes.”

“My studio is a place of accrual. I have two barbells from, oddly, a Chanel window display that an ex worked on. They roll around to remind me that I once went to the gym. The funny thing with this pile of work is that it’s made me rethink how I might combine drawings. I’ve been talking about doing these heaps of drawings that are seemingly haphazardly thrown together. In some ways, it’s a test — I have to trick myself to be loose and not so beholden to creating an image that follows the logic of photography.”

“This is a picture of me in my studio taken by my sister. I am wearing a Todd Snyder bomber jacket that I coveted until it was 80 percent off. It was hot out but I still put this on in the studio to feel dapper for two minutes. I’m standing in front of drawings in progress. They are kind of inspired by the Rolling Stones’ ‘Goats Head Soup’ photographs, in which they’re wearing these colorful scarves. But then it’s weirdly like looking at Yoko Ono’s hair upside down — I can’t tell you what it’s about. I’m just trying to make these mysterious, uncanny tornado-head creatures that may or may not have fanny packs by the time I’m done with them.”

10/01/2020 Entertainment Comments Off on From Geoffrey Chadsey, a Visual Diary of the Last Days of Summer
Recent Posts
We and our partners use cookies on this site to improve our service, perform analytics, personalize advertising, measure advertising performance, and remember website preferences.Ok