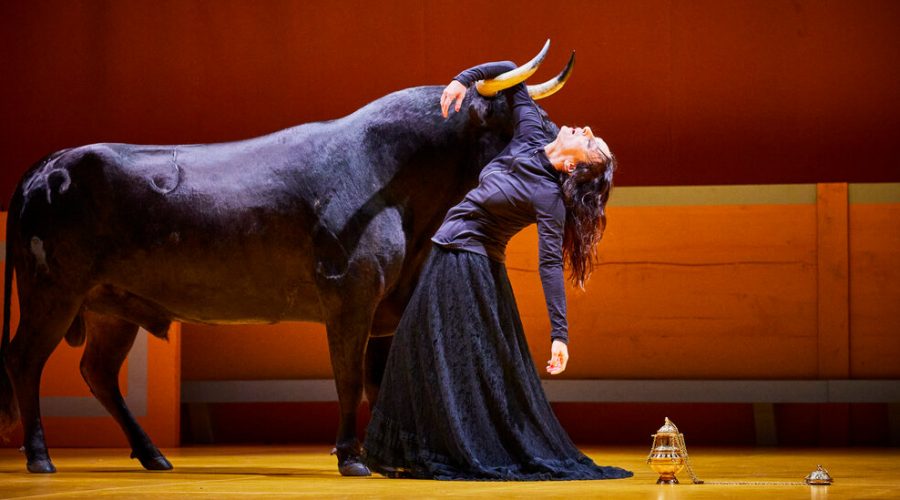 BERLIN — Theater, according to the Spanish director and performer Angélica Liddell, is a sacrificial act. In the opening minutes of her new show, “Liebestod: The Smell of Blood Does Not Leave My Eyes, Juan Belmonte — Histoire(s) du Théâtre III,” she takes a razor blade and slashes at her kneecaps and the back of her hands. It’s a “sacrifice in the name of the absurd,” she explains in an online teaser for the production. “It’s not a sacrifice in pursuit of the greater good.”

“Liebestod” is the centerpiece of this year’s FIND festival of new international drama at the Schaubühne theater in Berlin, where many of the 2021 entries flirt with the redemptive power of art as a tool for both survival and transcendence.

The theatrical persona Liddell assumes in “Liebestod,” a monologue-fueled play about art, religion, Wagner and bullfighting, is loud, angry, self-destructive and startlingly musical.

When she’s not singing, cooing or screeching along to Bach, Handel and Spanish flamenco rumba, she lashes out at the audience for their mediocrity, hypocrisy and middlebrow tastes from a sparsely decorated stage whose yellow floor and red curtains suggest a bullring.

In extended soliloquies, Liddell rails against the spiritual and aesthetic decadence of contemporary “culture.” Nor does she spare herself from scathing criticism. As a result, the production contains a running commentary on its own status as art.

“Liebestod” refers, of course, to Wagner’s “Tristan und Isolde.” The term is often used as a shorthand for the opera’s radiant coda, where Isolde sings herself to death in a moment of transfiguring ecstasy. We never hear the aria in the production, although Liddell, dressed as a matador, recites the lyrics to the stuffed effigy of a bull.

While bullfighting is a main trope of the production, “Liebestod” is also awash in Catholic symbolism. Liddell renders the liturgical in ways both disturbing and absurd, including in a scene in which she mops her own blood with bread, which she then eats. There’s also a double amputee dressed as Jesus and a coffin-shaped glass reliquary filled with live cats. Some of these images seem worthy of Buñuel (an artist Liddell reveres), although the atheistic filmmaker would rise from the dead to protest when Liddell endorses theocracy as a corrective to a society built on secular values.

Although she lacerates herself and her audience (some of whom left; others giggled nervously; most applauded heartily), it is clear that Liddell considers art a wellspring of holy beauty. And at the moments when her production approaches the high-water mark of the art she so venerates, Liddell makes us feel how dazzled she is.

While Liddell performs as if her every minute onstage were a fight for survival, she’s not the only person with work at the festival for whom making art seems a matter of life and death. The Russian director Kirill Serebrennikov spent 18 months under house arrest in Moscow on charges of embezzlement that are widely considered to be trumped up. During his long confinement (and the coronavirus lockdowns that came after it), Serebrennikov has directed plays, operas, films and even a ballet remotely. Much of his confinement-era work has dealt with persecution, paranoia and even incarceration, suggesting a therapeutic working through of themes that loom large in the director’s new reality.

In 2017, Serebrennikov contacted the Chinese photographer Ren Hang about developing a play inspired by his arrestingly provocative images. Shortly afterward, Hang leapt to his death and Serebrennikov’s freedom of movement was curtailed. From his living room, he devised “Outside,” a phantasmagorical double exposure of himself and Hang that premiered at the 2019 Avignon Festival.

At the start of the performance, the American actor Odin Lund Biron plays a character who is similar to his director. He converses with his shadow about life in confinement and under surveillance. These early scenes, which depict a version of the director’s Kafkaesque ordeal from the inside, are the most dramatically absorbing in the play. Soon, however, Biron is all but supplanted by the suave Russian actor Evgeny Sangadzhiev, who plays the Chinese photographer. The stage fills with beautiful bodies, many naked or in various stages of undress.

“Outside,” though less hermetic than “Liebestod,” is similarly committed to art that is upfront about mining personal pain for the sort of rare beauty that can produce epiphany. For all of their differences, these two shows reflect the sensibilities of artists who are not afraid to practice their art as an end in itself.

“I think that making theater into a tool is death to theater and death to art,” Liddell says in the “Liebestod” teaser. In the context of this year’s festival, that credo almost sounds like a warning to some of the other artists featured in the program.

In “Not the End of the World,” the writer Chris Bush and the director Katie Mitchell run the risk of using theater to lecture the audience about the dangers of climate change. Bush is a young, acclaimed British playwright; Mitchell is arguably the most influential English theater maker working regularly on the continent. Sadly, their encounter is ill-fated.

The play toggles between time periods and plot lines at breakneck speed: a young climate scientist interviewing for a postdoctoral position; a researcher who dies during a research expedition; a woman delivering a eulogy for her mother.

To their credit, Bush and Mitchell have consciously avoided making a militant play, but what they’ve given us is so slippery that it’s very difficult to get a handle on.

The wealth of obscure or cosmically weird anecdotes that are stuffed into this collagelike text often make the play sound like “Findings,” the back-page feature of Harper’s Magazine that compiles wild facts from science journals.

In keeping with the play’s theme, the entire production has been crafted with an eye to sustainability. The British team didn’t travel to Berlin for rehearsals; the sets and costumes have been recycled or repurposed; and the show’s sound and lighting is powered by two cyclists who pedal from the sides of the stage. Yet these facts don’t add much to the production.

Another British production at FIND, Alexander Zeldin’s “Love,” also runs the risk of “making theater into a tool.” First seen at the National Theater in London in 2016, it centers on a family who have been suddenly evicted from their apartment and find themselves in a crowded shelter, struggling to maintain their dignity.

There are so many ways that a play like this could go wrong, but “Love” is neither earnest nor preachy. The themes are so elegantly dramatized, and the characters so beautiful rendered, that it winds up being politically urgent almost by stealth; the production’s emotional impact is surprising considered how economically it is put together.

The immense set depicting the dreary residence plays a focusing role — for the actors, I imagine, as much as for the audience. This is naturalistic theater at its best, evoking the work of the filmmakers Mike Leigh and Ken Loach.

“Love” had me thinking that perhaps Liddell is too absolutist in her thinking. I’m not saying it’s easy, but in the right artist’s hands, theater that is alive to social and political issues can be an occasion for beauty and transcendence.

FIND 2021 continues at the Schaubühne through Oct. 10

10/07/2021 Entertainment Comments Off on From a Contemporary Drama Festival, Tales of Art and Survival
Recent Posts