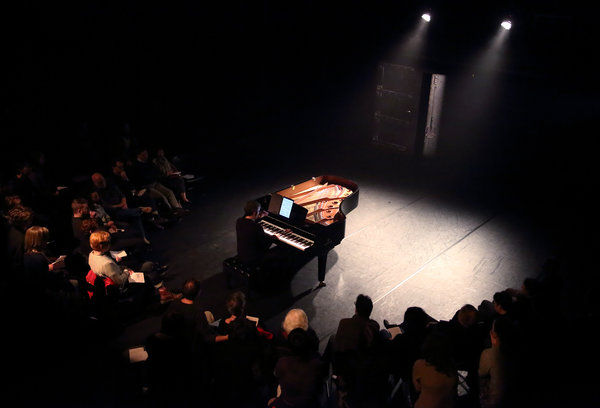 Readers! This week we covered

— “Otello” at the Met, conducted by Gustavo Dudamel

— Ensemble Correspondances, in music of Charpentier

I leave you with four favorite Christmas selections. Enjoy, and may your holidays be full of music! ZACHARY WOOLFE

Last weekend was the second annual Run AMOC! Festival at the American Repertory Theater in Cambridge, Mass., a celebration of the American Modern Opera Company, a troupe of young and preternaturally talented musicians and dancers dedicated to collaboration and experimentation, led by artistic directors Matthew Aucoin and Zack Winokur.

The three intimate concerts I heard on Saturday were blindingly impressive. One fun hour had Emi Ferguson playing Bach’s flute sonatas with a six-part continuo band, Ruckus, improvising on the figured bass, a fizzing, daring display of personality and imagination. Another was a concert of duets, everything from Mr. Aucoin’s ferocious “Dual” (played by the cellist Coleman Itzkoff and the bassist Doug Balliett) to a demonstration of raw power, virtuosity and feeling from the percussionist Jonny Allen and the dancer Julia Eichten in Iannis Xenakis’s “Rebonds.”

None of that quite came close, though, to the spell cast by the pianist Conor Hanick in a complete account of John Cage’s “Sonatas and Interludes” at The Ex, probably the best instrumental concert I have seen all year by virtue of its rethinking of the basics of what a recital might be. Performing with his back to an audience seated in an arc around him, Mr. Hanick’s playing was breathtaking, at once penetrating and mystifying. But it benefited immeasurably from imaginative lighting in this black-box theater from Christopher Gilmore — a spotlight down on the open piano here; torchlight slowly roaming there; and, as the last, tender sonata drifted away, darkness, lit only by the score on an iPad, until it, too, turned to black. DAVID ALLEN

The annoying scaffolding that proliferates around New York can sometimes seem permanently affixed to buildings in perpetual repair. But outside a drawing studio on Broome Street on the Lower East Side, it provided a makeshift refuge on a rainy Friday for the intrepid performers and music lovers who gathered at noon for “Characters of the Dance,” one of the programs for this year’s citywide Make Music Winter, an annual solstice event. (The program was supposed to have taken place down the block in Sara Delano Roosevelt Park.)

The star (and host) was the flutist Andrew Bolotowsky, who wore a Santa Claus hat and had the physique to match, complete with beard and chortling manner. He began by leading the 20 or so people who showed up in a singalong of holiday favorites, everything from “Jingle Bell Rock” to “Lo, how a rose e’er blooming.” Then three dancers, dressed in colorful costumes and 18th-century-ish powdered wigs, performed a montage of early ballet steps as Mr. Bolotowsky played Jean-Féry Rebel’s “Les Caractères de la Danse” (1715). The dancers had about a seven-square-foot patch of protected sidewalk on which to execute their bouncing steps and turns. To end the program, before “everybody melts from the rain,” he said, Mr. Bolotowsky performed some lively Couperin, and kept right on playing even as a garbage truck bellowed nearby. ANTHONY TOMMASINI

At this time of year, I inevitably end up working my way through recordings of “Messiah,” if only to be reminded of the tremendous diversity of ideas performers of Handel’s masterpiece have had over the decades. Two, yes two, versions of this year’s iteration of The Best “Messiah” in New York are currently available for streaming on the website of Trinity Wall Street, one from last Friday, the other from Monday.

Monday’s, in particular, is a classic demonstration of what the conductor Julian Wachner and his forces have been trying to do with this piece over the years — overwhelming vibrancy in the choral work; somewhat patchy but undeniably honest solo singing; virtuosic period-instrument playing; and, overall, a unmatched sense of drama. But for sheer satisfaction I usually find myself turning back 50 or 60 years, to three takes on “Messiah” undimmed by age: Colin Davis’s wholly reliable account from 1966 with the London Symphony; the unending glory of Otto Klemperer’s profoundly spiritual taping with the Philharmonia in 1964; and, the maddest of all recordings, Hermann Scherchen’s drawn-out version from 1959, from Vienna, at once bafflingly monumental and unbelievably tender. DAVID ALLEN

Kathryn Lewek, who made her Metropolitan Opera debut in 2013 as the Queen of the Night in Mozart’s “The Magic Flute,” is back singing the role in a family-friendly, trimmed-down, English-language version of the opera, a holiday presentation of Julie Taymor’s popular production. On Wednesday, in the character’s two big arias, this fearless soprano dispensed the fiery runs and multiple leaps to F with utter confident and coolly radiant sound. Here she is in an earlier Met performance of the role (in the original German). When is the Met going to give her opportunities in other roles? ANTHONY TOMMASINI

Over the last two seasons, the exceptional young lyric tenor Ben Bliss has been on a roll in Mozart at the Metropolitan Opera. He just returned to the house as Tamino in “The Magic Flute,” and he sang beautifully. Last spring he was Ferrando in Phelim McDermott’s vividly reimagined new production of “Così Fan Tutte,” which sets the story in 1950s Coney Island. Here’s Mr. Bliss, looking like a everyday guy in Brooklyn pining over his girlfriend, singing the ardent aria “Un’aura amorosa.” ANTHONY TOMMASINI

The soprano Sissieretta Jones sang for four consecutive American presidents before she died in 1933, toured Europe and South America, and was a headliner at both Steinway and Carnegie halls. (Michael Cooper wrote her long-belated obituary in August.) On Monday at National Sawdust in Brooklyn, a tribute event sought to reclaim some of her past glory.

“Sissieretta Jones: Call Her By Her Name,” which the soprano Jessye Norman has long been developing alongside Adina Williams, of National Sawdust, and the soprano Harolyn Blackwell, included poetry by Maya Angelou and Toni Morrison as well as readings from Ms. Sissiereta’s own notes by Alicia Hall Moran. Operatic tunes culled from a varied career were recreated; Darryl McDaniels of the rap group Run-DMC recited Langston Hughes; dancers whirled to the music of Scott Joplin and Richard Strauss.

While the selections were not always the most inspired — I could have done without another rendition of Angelou’s “I Rise” — the chance to hear Ms. Norman and Ms. Blackwell in conversation after the show more than made up for it. Ms. Norman was her usual winking, wry self: “Oh, that old thing?” she said with a laugh, when asked to reflect on her voice. “I have no memory of not wanting to sing something. I sing all day to myself — sometimes it disturbs others in the house who don’t know what’s going on.” JOEL ROZEN