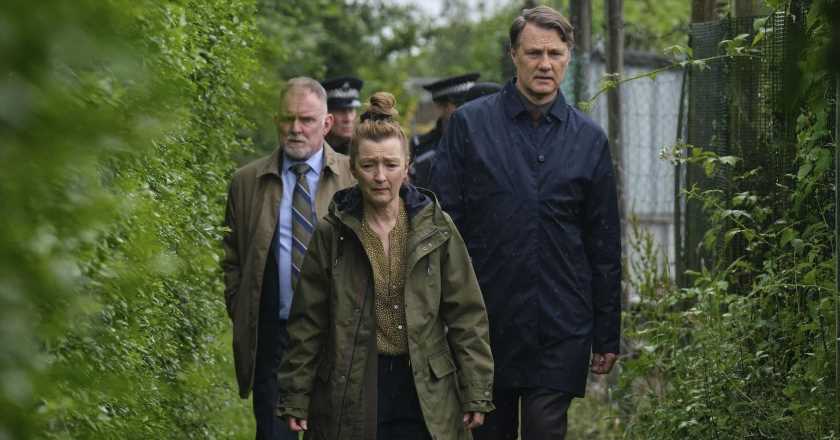 Here’s what you need to know about new BBC crime drama, Sherwood.

Fun fact: our seemingly insatiable thirst for dark and gritty crime dramas is at its most high.

That’s right; we’ve binged our way through the likes of DI Ray, The Staircase, The Sinner, Pieces Of Her and Trigger Point – and there are plenty more due to hit our screens later this year, too (think Suspect and The Pact, to name just two).

Now, we have a new must-watch crime show to add to the list in the form of BBC One’s Sherwood.

Here’s what you need to know about the six-part series.

What’s the plot of Sherwood?

As per the BBC’s press release, Sherwood – which is set in the Nottinghamshire mining village where writer James Graham grew up and is inspired in part by real events – sees “two shocking and unexpected murders shatter an already fractured community and spark a massive manhunt.”

BBC One’s Wolf: this new crime thriller is all about uncovering cold cases and one psychopath’s cruel mind games

“As suspicion and antipathy build, between lifelong neighbours and towards the police forces who descend on the town, the tragic killings threaten to inflame historic divisions sparked during the Miners’ Strike three decades before.

”Sherwood is at once a compelling crime drama that explores, for the first time, the controversial deployment of so called ‘spy cops’ around Britain, and it is a distinctly human story of a community forced to re-examine the terrible events of decades ago for which it still bears the scars and lasting pain. It is also a powerfully resonant and timely examination of the frayed social and political fabric of modern-day, post-Brexit Britain.

“From the oft-ignored former ‘Red Wall’ towns and communities who find their lives and futures reduced to political footballs and endless discourse from the commentariat of the day, to the entrenched anxiety that defines the relationship between all marginalised communities and the police force, and to the evolving role and uncertain future of protest itself, Sherwood explores and exposes some of the most urgent fractures and discords that thread through modern British society.”

Some 450 policemen, many of them armed, group for a massive man hunt for two murder suspects thought to be hiding in Annesley Forrest, Nottinghamshire, on 13 August 2004.

Who will star in the cast of Sherwood?

The cast is one full of familiar faces and stellar British acting talent. Leading the cast as Detective Chief Superintendent Ian St Clair is David Morrissey (Red Riding, The Missing), who is described as “a lifer in the Nottinghamshire constabulary, having risen through the ranks. Canny and a good judge of character, he is a formidable and empathetic detective with an impressive track record to prove it.”

But when he’s tasked with finding the link between the two killings before him, he is forced to reunite with Detective Inspector Kevin Salisbury, “an old rival from the Metropolitan Police whose return to the town threatens heightens the already-febrile tensions running through the community.”

DI Salisbury is played by Robert Glenister (Hustle, Spooks) and his enigmatic character has little desire to return to Ashfield.

The rest of the cast is made up of Alun Armstrong (New Tricks) who will star as Gary Jackson, a committed NUM member and one of the few miners from Ashfield on the picket line in the 80s. He’s joined by Lesley Manville (Phantom Thread, Harlots), who plays his wife, Julie Jackson and is estranged from her sister Cathy (Ali & Ava’s Claire Rushbrook) over their divided loyalties during the miners’ strike.

Is Sherwood based on a true story?

Sherwood is inspired by the 2004 manhunt for two killers in north Nottinghamshire; Robert Boyer, who escaped into Annesley Forest after killing former miner Keith Frogson, and Terry Rodgers, who killed his daughter Chanel Taylor at around the same time and also fled into the woods.

The former was detained in hospital indefinitely after being apprehended by police. Rodgers, however, died during a hunger strike as he was due to face trial for his daughter’s murder.

A police helicopter flies low over woodland during the 2004 manhunt for murderers Robert Boyer and Terry Rodgers.

However, while Sherwood is very much influenced by these real-life events, writers and producers have stressed that the drama itself is fictional.

Is there a trailer for Sherwood?

There most certainly is and it’s got all the makings of a truly stellar BBC drama. In it, we see flashbacks to the 1984 miners’ strike and the persisting tensions decades on in this small town. We see snippets of sinister bow and arrows (which seem to be used as a murder weapon), forest-wide manhunts and simmering emotion.

“I know the potential to inflame divisions in the community,” St Clair (Morrissey) tells the residents.

Watch the trailer for yourself here:

What are people saying about Sherwood?

“It means the world to have this opportunity to bring the voices of a community I grew up in to BBC One,” says Graham.

“So much is spoken about the divisions and difficulties in these ‘Red Wall’ towns, but they’re not always understood. I feel so honoured to be able to tell a fictionalised story about a very real trauma, but with the humour and heart and resilience of the people I know and love there.”

Piers Wenger, director of BBC Drama, adds: “In blending real and fictional events, James has created a penetrating, heartfelt and purposeful thriller which exposes the tensions and fault lines at the heart of modern Britain.

“Sherwood is set to be an exceptional series by one of our greatest dramatists and we are proud to be bringing it to BBC One.”

When will Sherwood be available to watch on TV?

The six-part crime drama premieres on BBC One on Monday 13 June at 9pm and continues the next day on Tuesday 14 June at 9pm. All episodes will be available to watch on BBC iPlayer.

06/01/2022 Entertainment Comments Off on Everything you need to know about Sherwood, BBC’s new drama about murder, miners and “spy cops”
Recent Posts