Sunday is the 125th anniversary of the premiere of Dvorak’s Symphony No. 9 (“From the New World”) at Carnegie Hall. Latching onto its unforgettable melodies, including the famous tune that inspired “Goin’ Home,” audiences around the world have craved this lush, dramatic work ever since.

Countless history books and program notes would have us believe that Dvorak suddenly awakened a national musical consciousness soon after his arrival in the United States in 1892 and that the “New World” Symphony was an attempt to show naïve American composers how to build a distinctive style using what Dvorak called “Negro melodies.” Leonard Bernstein claimed at a 1958 New York Philharmonic Young People’s Concert that composers in the United States at the end of the 19th century began to “feel funny about not writing American-sounding music. And it took a foreigner to point this out to them.”

A great story. But it’s not true. 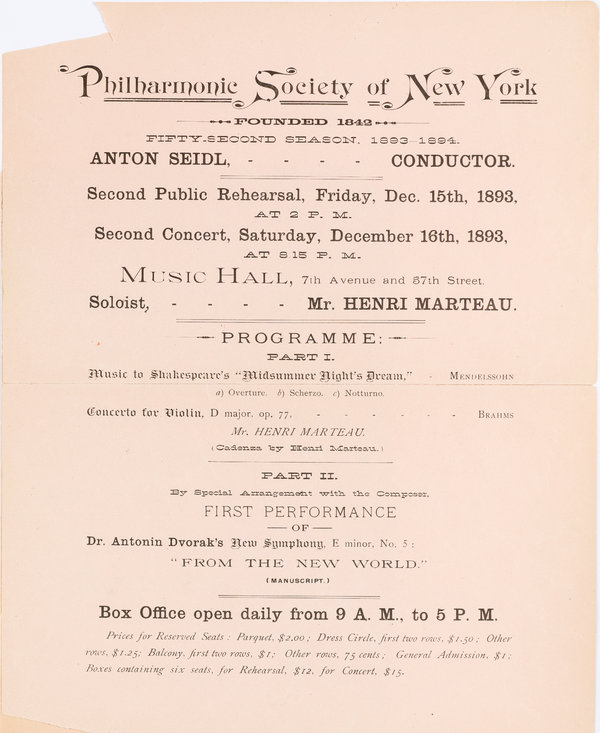 American composers were wrestling with national identity long before Dvorak’s arrival. Speaking at the annual convention of the Music Teachers National Association in 1884, the Boston composer George Whiting invoked the pianist Louis Moreau Gottschalk’s Creole-inspired music of the 1850s and argued that composers should work with “Creole melodies of the South” to create a particularly American style. Reprints of Whiting’s speech appeared widely in the musical press and inspired impassioned rebuttals around the country.

Drawing compositional inspiration from black musical idioms was also nothing new. Henry Schoenefeld, based in Chicago, explained in the program note to his 1890 “Suite Characteristique” for string orchestra that an “American school will be based upon the Negro melodies of the South, as the Russians have founded the Russian school by looking to the Slav melodies” — a formulation that nearly matched what Dvorak would recommend later. Featuring a tambourine, triangle, and tam-tam, the suite’s second movement attempted to capture the vitality of black vernacular dance with syncopation, unusual chromatic lines and colorful effects in the strings.

Around this time, the philanthropist Jeannette Thurber invited Dvorak to become director of her new National Conservatory in New York. When the news of his appointment became public in 1891, critics immediately doubted that he could help American composers find a national voice. And Dvorak openly denied that the United States could ever develop a truly national style.

“America will have to reflect the influence of the great German composers,” he told a reporter in London, “just as all countries do.”

The conductor Franz Xavier Arens, based in Milwaukee, wanted to prove otherwise. Early in 1892, he toured Central Europe, with Schoenefeld’s suite anchoring an all-American orchestral program. The suite’s evocation of black American musical idioms delighted audiences. A Viennese critic wrote that “this picture from the Negro life of the South is distinguished through lively shaping and unusually clever exploitation of unfamiliar musical elements,” while a writer in Leipzig described it as “the most specifically American” piece on the program. Reports on Arens’s concerts spread in German-language newspapers for weeks.

Accounts of foreign enthusiasm reached the United States two months before Dvorak’s arrival. A.J. Goodrich, then the leading American music theorist, commented that Schoenefeld’s music had “attracted instant attention, for here was a motive not already developed by Brahms, Dvorak, Saint-Saëns, Grieg or Tschaikovski.” When Dvorak finally arrived, the idea of mixing black vernacular idioms with conventional classical idioms had fascinated musicians across Europe and the United States for nearly two years. That he would be asked to weigh in on the subject was all but inevitable.

He immersed himself in this burning topic soon after arriving. He listened to one of his black conservatory students, Harry Burleigh, sing spirituals and studied the Louisville music teacher Mildred Hill’s scholarship on black folk songs. Maurice Arnold, another black student, showed Dvorak his attempt at writing an orchestral piece using black idioms. And the manuscript for Schoenefeld’s new “Rural Symphony” sat on Dvorak’s desk awaiting judgment in a conservatory-sponsored contest. (It eventually won.) By May 1893, Dvorak had seen and heard enough.

“When I first came here last year,” he explained in a statement to the press, “I was impressed with this idea and it has developed into a settled conviction.”

Although Dvorak hadn’t originated the concept, his endorsement of incorporating these melodies and idioms into “classical” music spurred a vigorous, racism-laced debate. Detractors questioned the Americanness of the melodies, claiming that they were African or actually derived from white sources heard on plantations. The New York composer William Mollenhauer snipped that “an American would be ashamed to derive his inspiration from such trash.”

For the first time, prominent black intellectuals also addressed the topic. Harry Smith, the editor of The Cleveland Gazette, remarked that Dvorak’s prescription “seems to be a bitter pill indeed for many prejudiced musicians (white) to swallow.” Dvorak, he added, was “on the right track, for the simple reason that about all the truly American music we have is furnished in these very same ‘Negro’ melodies.”

Anticipation mounted as observers wondered how Dvorak would manifest these principles in his new symphony, especially since he had encountered even more folk styles at the World’s Columbian Exposition in Chicago in 1893. The New York critic Henry Krehbiel gave a sneak preview in the Tribune the day before the premiere, arguing that it projected a truly American character through its blend of ethnic musical traits like the folky, syncopated “Scotch snap” and “the mood inspired by the contemplation of Indian legend and romance.”

Surprisingly, the premiere led to perplexed disappointment. Listeners agreed that the music was magnificent, but many did not hear anything “American” in it, after all. “Some of those who applauded most loudly,” wrote one Brooklyn critic, “thought the Indian and Negro themes would have been as effective if picked up in Siberia.”

The symphony’s “true” identity — American? Czech? something else? nothing at all? — has remained a source of debate to this day. But these discussions have taken for granted that the piece was sui generis and have obscured Dvorak’s original purpose: to acknowledge contributions black musicians had already been making to the American cultural landscape. The “New World” Symphony moved one of Dvorak’s black students, Will Marion Cook, to muse on whether black composers might become the voice of the nation.

“And who knows?” Cook asked. “Soon, perhaps, will some native composer, hopefully of the future, take the pen, inspired by long repressed imagination, and paint glowing tone pictures of a radiant dawn — a dawn without passing — a day without a night.”

Douglas W. Shadle is the author of “Orchestrating the Nation” and is writing a book on the “New World” Symphony.