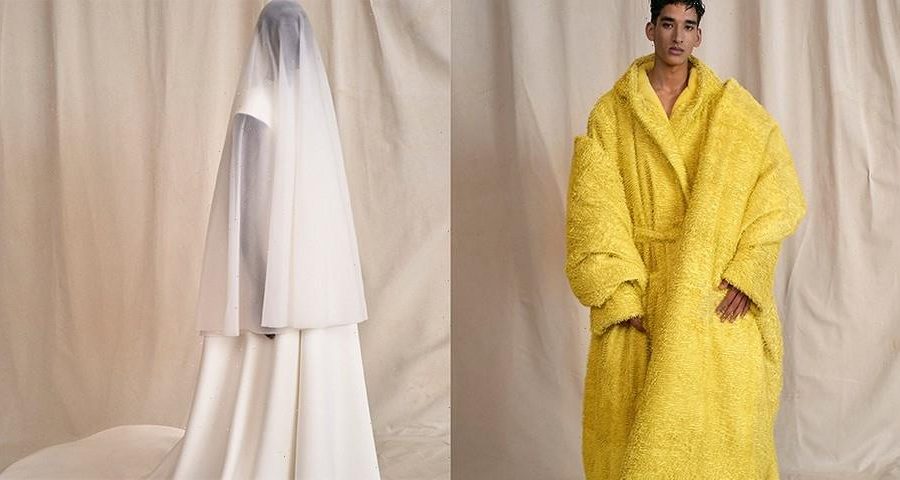 Presenting in the original salon of Cristobal Balenciaga, which was refurbished for the occasion, the assembled audience included Kanye West (notably decked in what seems to be an unseen YZY GAP Round Jacket, a full face covering, and a pair of FOAM RNNRs), Bella Hadid, Anna Wintour, Edward Enninful, Lewis Hamilton, James Harden, Lil Baby, and a select group of fashion editors.

From a single mirrored door, the first look appeared to a music-free room, with no sound other than the model’s footsteps. A somewhat somber affair at first, Gvasalia’s usual gang of faces walked around the hall in all-black ensembles — a nod to Balenciaga himself, who typically opened with black looks, to focus the audience on the silhouette. This included suits for men and women, tailored jackets, denim, and one notable look: a double-breasted floor-length coat paired with a padded nylon puffer cape-jacket.

In typical Balenciaga form, the looks became increasingly daring, angular, sculptural, and dominated by cuts that have been over-exaggerated and re-proportioned. For example, a double-breasted ankle-length overcoat was finished in a clean houndstooth, but finished with the extra-wide shoulders that have become a Gvasalia hallmark. Other models were seen wearing architectural cocktail dresses with space-age gloss black hats on their heads, covering their faces.

As another nod to the heritage of couture, the final looks are bridal, with the first being a dress on the front and a suit pant at the back, and the final showstopper presenting a full-length veil — a sheer white piece falling from the head and shoulders onto the floor, trailing behind the model in the same eerie way that the show started.

Take a look at the Balenciaga Couture show in the gallery above.

And for more on the show, here’s a better look at that rumored YZY GAP jacket.
Source: Read Full Article