I’m still not sure precisely why, but a couple of months ago I decided I wanted to come up with a chicken recipe that would go viral on social media.

O.K., fine. I do know why. I was just too embarrassed to admit it outright: I was jealous of the New Yorker food correspondent Helen Rosner’s blow-dryer roast chicken. And every recipe the Times food columnist Alison Roman has ever written. So I wanted to throw my hat into the ring. With a chicken recipe. Because everyone (besides vegetarians, I guess) likes chicken, right?

I know that you can’t make magic on demand (or at least I can’t) and that it’s impossible to predict what will take a recipe viral on the internet, but there do seem to be a few cardinal rules. First, there needs to be a hook — something unexpected, or clever, like using a blow-dryer to dry out chicken skin so that the bird emerges from the oven with “shatteringly crispy skin.” But also, ingredients can’t be too exotic or unfamiliar. Roman, for example, is widely known for her salted chocolate-chunk shortbread, a chocolate-chip-cookie variation now simply referred to as “the Cookie” by pretty much everyone who has ever been on Instagram. The last rule is pretty obvious: The recipe needs to yield photogenic food. In other words, nothing too brown or mushy. Bonus points for rainbow sprinkles, though probably not on chicken.

Looking back, my first mistake in this endeavor was, as usual, overthinking things. The best — and most popular — recipe I’ve ever written has three ingredients: buttermilk, chicken and salt. It’s simple, easy and extraordinarily tasty. Anyone with an oven can make it. It’s my favorite roast chicken, and it just so happens that buttermilk plays the role of three separate elements — a sugar, an acid and a liquid brine. The lactose in buttermilk produces the chicken’s signature mahogany-brown skin while the acids help tenderize the meat and offer a slight, pleasant tang. And some of the water the buttermilk contains makes its way into the chicken during the overnight marination, yielding moist meat.

After deconstructing that recipe and examining what made it so wonderful, I wanted to put it back together in an even more appealing way. And what’s more appealing than a bread stuffing? Nothing, if you ask me. In keeping with the second cardinal rule of virality, I wanted to create a one-pan dinner. I like my stuffing to be absurdly moist; if I cooked the chicken atop the bread, it would absorb any drippings. If I brined the chicken in chicken stock, then the drippings would be doubly chickeny. There was my hook! Who’d ever heard of stock-brined chicken? And, as a bonus, I could dilute the brine with a little more unsalted stock and toss stale bread in the flavorful liquid so that nothing was wasted. At this point, I was feeling really proud of myself. Then I remembered that there isn’t anything sweet or acidic about chicken stock, which meant I would need to add more ingredients. I settled on apple cider and cider vinegar — both acidic and aligned with that slightly Thanskgiving-ish flavor I wanted for the stuffing. 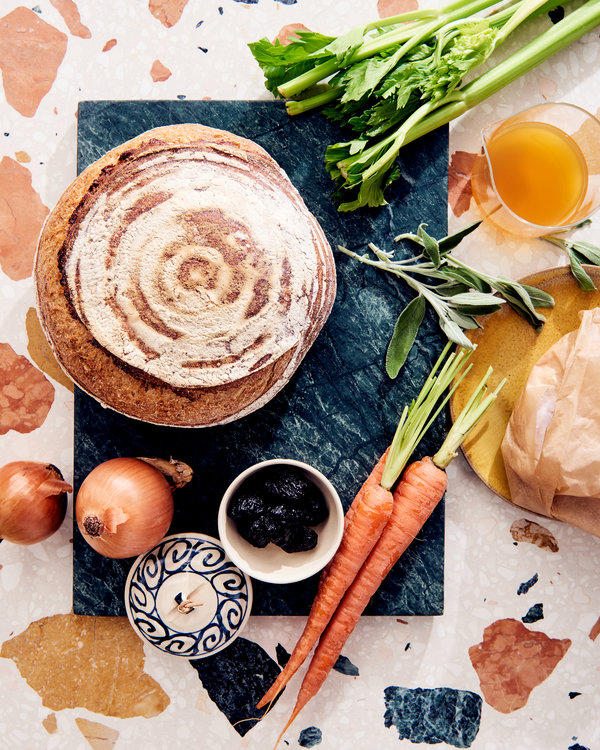 Then I wondered, What good is stuffing without onions and celery? So I added both, as well as some carrots for a pop of color and sweetness. Three more ingredients, but essential ones. And then, of course, the stuffing would need butter, herbs and something sweet to balance out the vinegar’s edge, so I quartered some prunes and added them into the brine so they would plump up. Finally, to make it a true one-pan meal, it would need some cooked greens. I like the bitterness of broccoli rabe, so I folded some in. With the addition of each new ingredient I saw the hope of virality fading away like the McFly siblings from their family photo. Now that the list read 16 ingredients long, I knew I would have to rely on my chicken’s looks to get anywhere. I lay the chicken atop it and slipped it into the oven, hoping for an extreme makeover.

What emerged from the oven about an hour later looked beautiful to me, but every mother thinks her children are gorgeous. In truth, I knew it wasn’t destined for a life of hashtags and retweets. It just wasn’t photogenic enough. I’ve always joked that my food memoirs will be titled “Brutta ma Buona,” the phrase Italians use to describe food that’s delicious but rustic-looking at best: ugly but good. This dish is just that. In the end, I violated all the cardinal rules of virality, pretty much guaranteeing a life of relative obscurity for this recipe.

I waited for a few minutes, until the stuffing’s temperature subsided, and then I took a bite. Ugly or not, it was everything I’d hoped for. The bread had absorbed the stock and turned into a chewy, savory nest cradling the tender, perfectly browned chicken. Each bit of stuffing offered a different surprise — sometimes the sweet-and-sour zing of a prune, other times the faint rumor of Thanksgiving whispered by celery and thyme. It was as satisfying as I ever could have hoped, even if it wasn’t particularly attractive. Later, I carried the rest of the dish over to a friend’s house a few blocks away. She and her entire family were sick, and I thought they would appreciate a nourishing meal packed with chicken, broth and some comforting starch, which is all I ever want to eat when I’m sick. The next day she told me her kids, still sick with the flu, were sitting at the table sopping up every bite. It might not have been the kind of viral I’d been going for, but no other response could’ve made me any happier.