At War is a newsletter about the experiences and costs of war with stories from Times reporters and outside voices.

Last Friday, while speaking to reporters about the Thousand Oaks shooter, President Trump insinuated that the gunman’s actions may have been a result of military-related mental-health issues. “He saw some pretty bad things,” Trump said. “And a lot of people say he had the PTSD. That’s a tough deal.”

People within the military and veterans community were angered by the president’s comments, which risked reinforcing stereotypes about veterans being ticking time bombs, susceptible to committing violent crimes. We asked readers to tell us about stereotypes they have encountered about veterans and post-traumatic stress disorder and the ways in which they have challenged them. Below is a selection of responses.

People Can Be Dismissive of the Severity of His Illness

My husband has PTSD. Together, we own a small business, so we have many opportunities to show what PTSD can look like. People expect him to look unkempt, confused and messy in dress and appearance. When he doesn’t fit “the look,” people, including health care providers, can be dismissive of the severity of his illness, so we are to be more open about our private struggle. While we have so far been reluctant in sharing too much, we are increasingly trying to discuss these issues with our children, as well as their teachers and peers. — Niki Leffingwell, Missoula, Mont.

[Get a weekly roundup of Times coverage of war delivered to your inbox. Sign up here.]

Most of Us Are Dealing With PTSD Pretty Well

I keep my PTSD to myself for the most part, because people seem to clam up when I let it out. What people don’t realize is that most of us are dealing with PTSD pretty well, even if it sometimes takes drugs and therapy to get by. But it is sometimes very hard to watch the world go about its business as if nothing ever happened, when there’s a whole group of people who are suffering in relative silence and watching the rest of the world be happy and get rich. — Roger Johnson

We Serve Our Nation Out of Uniform, as We Did Before

I am a combat veteran who, by virtue of my role in health care, saw the impact of violence and war every day I was deployed in Iraq and Afghanistan. I have PTSD, yet I have an incredibly meaningful life after service without issues of violence. I have many friends who have served as well and who also have PTSD. We continue to serve our nation out of uniform, as we did before. Many of us have shifted to saying “PTS” and removing the “D” to eliminate the “disorder” and move to the cause of the stress. That’s a simple but practical example that anyone can do to take a stigma and help eliminate it. — Richard Morton, Ponte Vedra, Fla.

We Are Just as Human as You Are

I see no connection between the service and violent crime myself, but I can easily see how uninformed people can make that knee-jerk connection. Just because you have familiarity with a tool, people can presume you are prone to using it, and this is not true. We are just as human as you are; we just have a different and more professional experience with life and death, all of us. I talk about what it was I did, particularly the places and events, because those bring meaning to people who have an ability to listen. I draw intentional comparisons between the military and the first responders whom people are around everyday and trust with their safety and security. It’s no different, this relationship, save for the fact that the police, E.M.T.s, doctors and car companies kill far more people than the military does, year in year out. — Chris McFarland, Toms River, N.J.

I Am Open and Honest About My Experiences

I believe a lot of people see combat veterans as “damaged goods.” They look at servicemen and servicewomen as a certain warrior class, and once veterans are done with their time in service, they are seen as a liability. I am open and honest about my experiences. My past has made and almost broke me. I have received inpatient mental-health therapy and given speeches with the president of the United States in attendance. I received a diagnosis of PTSD, but with help from the V.A., I was able to work for a United States senator and finish my undergraduate degree. I currently work for the National Park Service, am married, have a beautiful son and am enjoying life. — Joe Bykowski, Westhampton, Mass.

I’m married to a decorated disabled combat veteran with PTSD. I’ve had people ask if I’m scared he will hurt me, ask if I’m afraid he will “snap” and make statements implying that they believe because he’s been in a war zone and has PTSD that he must have violent tendencies. I always respond that the only thing I ever fear is that he will take his own life. Veterans are more likely to die by suicide than to harm others. — Page G. Whorl, Cambridge, Md.

The Latest Stories From At War 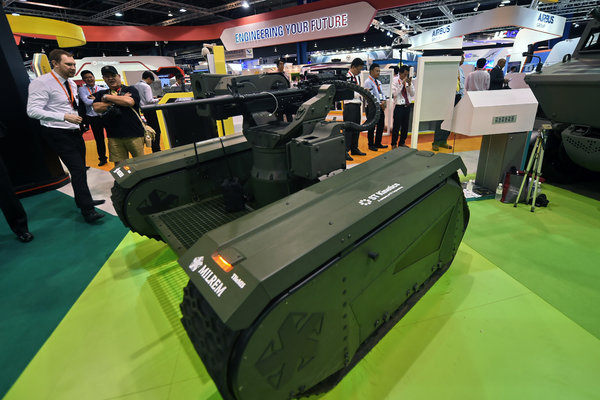 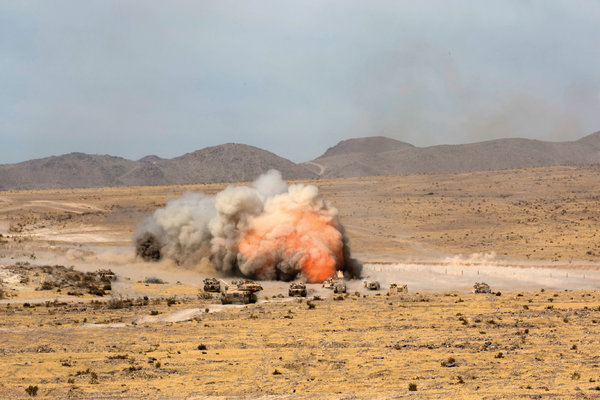 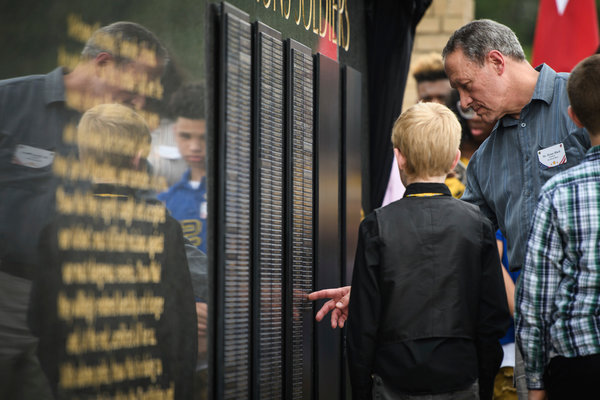 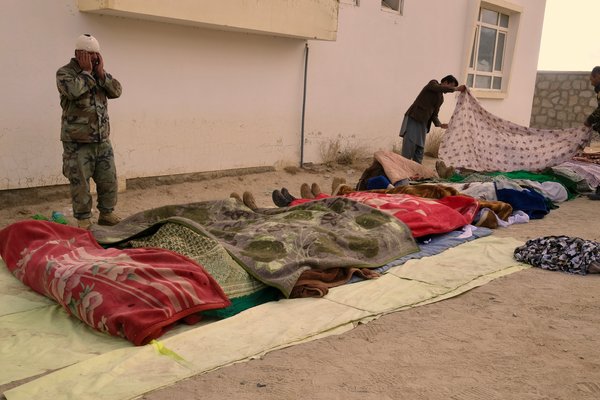 In North Korea, Missile Bases Suggest a Great Deception: President Trump says the nuclear threat from North Korea is over. New satellite images of 16 hidden ballistic missile bases suggest that it has worsened since his summit meeting.

Afghan Military Deaths Since 2015: More Than 28,000: The Afghan president confirmed a much higher death rate for his security forces than previously admitted, but said the Taliban were not winning.

Don’t Be Scared of Killer Robots: We should be thinking more about how much A.I. has changed our lives already, and the future of human-algorithm collaboration.

Burned-Out Cars, Smoke in the Air, Aerial Assaults, All in California: The scorched wildfire landmarks are reminiscent of war zones — not just in how they look, but in how they make the people battling the blazes feel.

Deployed Inside the United States: The Military Waits for the Migrant Caravan: With little electricity, no combat pay and holidays away from home, the 5,600 American troops on the southwest border are on a mission ordered by a politically determined commander in chief and a Pentagon unable to convince him of its perils.

From the Archives: How the Civil War Created Thanksgiving 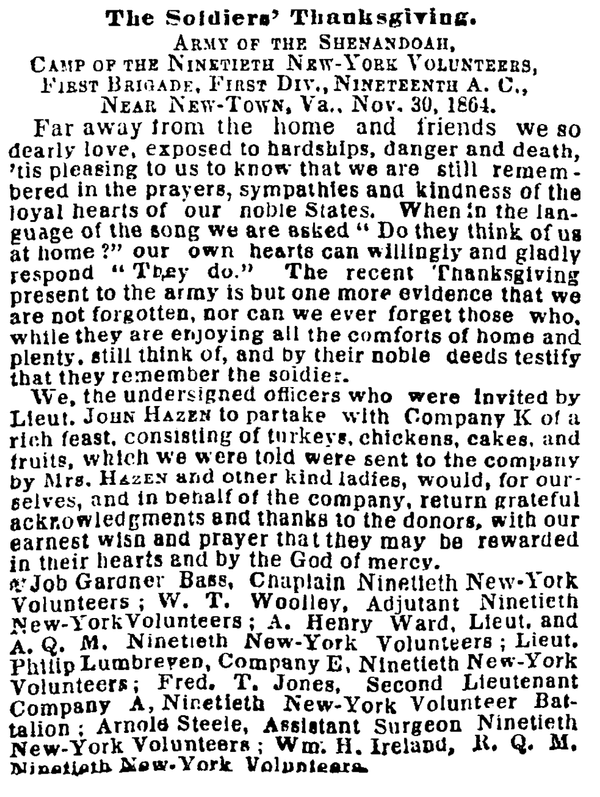 Our friend Sara Bonisteel over at the Times food desk dug up this snippet from the archives. It’s a letter of gratitude written in 1864 for a Thanksgiving dinner delivered to the Union troops in Virginia at the height of the Civil War. Do check out this 2014 blog post, written by Kenneth C. Davis, for the full story of how the Civil War turned Thanksgiving into a national holiday.

We’d love your feedback on this newsletter. Please email thoughts and suggestions to [email protected]. Or invite someone to subscribe through this link. Read more from At War here or follow us on Twitter.